Comments (0)
Add to wishlistDelete from wishlist
Cite this document
Summary
The emergence of the Internet has created several innovations in the way business operates. The banking industry was one of the industries that exploited the benefits that the Internet brings. Traditional banking institutions saw the opportunities that the new channel brings.
…
Download full paperFile format: .doc, available for editing
HIDE THIS PAPERGRAB THE BEST PAPER97.4% of users find it useful 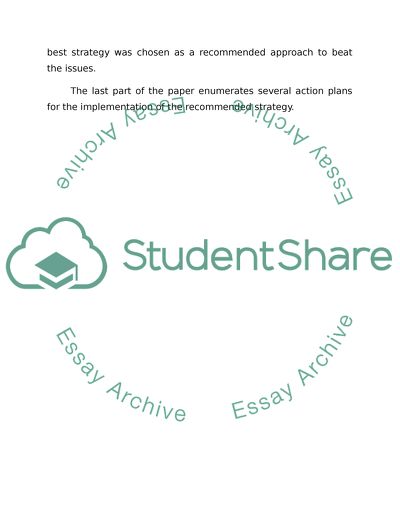 Download file to see previous pages Bank One is one of the biggest traditional banks in the US. They launched WingspanBank.com on 1999 in order to cater to tech-savvy Internet customers, in the hope of expanding their market size and operation. Wingspan was aggressive in strategies in order to become a leader in the virtual banking.The company implemented and launched innovative strategies to gain competitive advantage. However, by 2000, the new company was in trouble of closing shop.This paper aims to identify the key issues and problems that caused the failure of WingspanBank.com amidst the successful launch in 1999. The paper also enumerates several corporate strategic solutions that addresses the issues and answers the problems identified. With emphasis on market expansion and business growth, the alternative solutions were evaluated and the best strategy was chosen as a recommended approach to beat the issues.WingspanBank.com is an internet-only banking institution. It is under the umbrella of the parent company, Bank One, particularly in its subsidiary First USA. It was launched on 1999 with good reviews. It has garnered several awards for its internet-only operations after its launching. However, the virtual bank was treading on troubled water by 2000. Several issues contributed to the downfall of the bank.First, the Bank's expected success was highly dependent on the financial cover of First USA. When First USA was troubled and was under scrutiny from its customers, the financial support was brought to a standstill. Without the money poured into the initial operations and its aggressive marketing strategies, WingspanBank.com was in danger of a collapse.
Second, the expectations of the mother company on the internet bank were high. Bank One anticipated high growth rate on Wingspan's customer base as more and more people were hooked on the Internet. They invested millions in aggressive marketing and advertising initiatives to capture the market. When the expected growth was not achieved, Bank One has become skeptic on the performance of the new company and has doubted its future as a potential contributor to the corporation.
Lastly, the internet-only banking industry has become unattractive to customers. People were complaining on its operations, security and customer service. Sites were difficult to use. Human interaction, which was essential in the traditional banking, was lacking if not missing. Marketwise, the growth of online banking customers was only 2%.
With all these issues facing WingspanBank.com, Bank One top executives were weighing the pros and cons of discontinuing the operations of the virtual bank, due to its poor performance and failure to achieve expected growth.

Bank One can opt to implement several corporate strategies to address the issues and problems facing Wingspan Bank.
First, they can decide to sell the internet-only bank as a whole or pieces of the organization. Selling the company is a good option if buyers are willing to acquire it. Unfortunately, the bank is not attractive for buyers because it has no desirable assets aside from its Internet technology and infrastructure. Because the bank is still in its initial stage of operation, its brand name is not so much attractive to buyers. The brand name is yet to be embraced by consumers and become a part of the industry vernacular.
Second, they can choose to merge it with Bank One's existing Internet bank brand. Merging WingspanBank.co ...Download file to see next pagesRead More
Share:
Tags
Cite this document
(“Wingspan bank Essay Example | Topics and Well Written Essays - 1250 words”, n.d.)
Retrieved from https://studentshare.org/e-commerce/1528216-wingspan-bank

CHECK THESE SAMPLES OF Wingspan bank

... IMF/World Bank Response to Asian Crisis Since the first signs of the impending financial crisis appeared in Asian countries financial sectors, one wonders if the International Monetary Funds (IMF) and the World Bank (WB) understood from the outset what was happening, and whether their remedies were timely and appropriate; or, conversely, if prescriptions of IMF and WB made a bad situation worse. One of the underlying causes of earlier financial crises in Central and Latin America and in Africa had been excessive spending by governments. Chronic public sector budget deficits had generated price inflation and trade account imbalances that led to overvalued currencies and the flight of capital. The WB and IMFs conventional prescription...
8 Pages(2000 words)Assignment

Access to information is a vital part of organizational management processes as it not only promotes efficiency and knowledge-based discharge of duties by the employees but it a great tool for the management to exploit the available information to improve its performance. The information provides wide-ranging knowledge about t...

The bank provides personal and business banking, corporate finance, insurance, and private banking. Though the bank is based in Edinburgh, it operates globally (The Royal Bank of Scotland Group plc and London, 2009, Para 1).
The Approach of The Royal Bank of Scotland: The Royal Bank of Scotland has set some goals in which it is very clear. It commits to helping its customers in raising funds, managing risks and investing in successful plans. Its trust in its people’s creativity and skills has paved a way for this organization that goes to success only. The organization’s goal is to explore the best market opportunities for its customers. It is committed to improving the current methods of financing and concentrati...
6 Pages(1500 words)Assignment

Factors Influenced on the Bank Performance

...Assignment The performance of a bank is influenced by many factors which include; core deposits, loans to organizations and individuals, operating income and revenues, non-performing assets, securities, volatile liabilities and employee expenses. In addition, declining provisions which is way below the charge-offs leads to improved credit quality while net interest continues to increase. The influence is further compounded by several risks facing them which include slowdowns in real estate lending and common market investments as well as slow growth deposits growth. In this research study, the impact of total assets, income earning assets, deposits, equities and expenses on the total bank revenue was to be determined. Each variable’s...
6 Pages(1500 words)Research Paper

The Benefits of a Sperm Bank

Sperm banks are facilities designated specifically for receiving and storing sperms which are later used by women who need the same. Sperm obtained from such a donor is known as donor sperm (Falcone and Hurd 539). Other names for sperm banks include cryobank and semen banks. As medically perceived there is no difference between pregnancies gotten through the natural insemination and ones that have been artificially inseminated (Falcone and Hurd 547). Though this as said may be true, but could this be the view of every other person?
The fact that sperm can be donated raises a few ethical issues that need to be tackled before the process of artificial insemination begins (stanford.edu par. 4). These have been put into rights th...
6 Pages(1500 words)Case Study

The Compensation, Benefits, and Pension for Bank CEOs in Canada

...Pay trends for CEOs al Affiliation Pay tends for CEOs Introduction Organisations are duty bound to fulfill the aspirations demanded by shareholders through increasing the efficiency of production and profitability. The chief executive officers have high managerial powers to steer the organisation to success and as such, the compensation, benefits, and pension for the CEOs continue to decline due to the pressure from shareholders calling for the reduction of total pay for chief executive officers. The rationale for this new trend premises on the assumption that chief executive officers should not earn more than the average working citizens as both of them take part in the production process. Since the early 1990s, most banks in Canada...
7 Pages(1750 words)Research Paper
sponsored ads
Save Your Time for More Important Things
Let us write or edit the essay on your topic "Wingspan bank" with a personal 20% discount.
GRAB THE BEST PAPER

Let us find you another Essay on topic Wingspan bank for FREE!