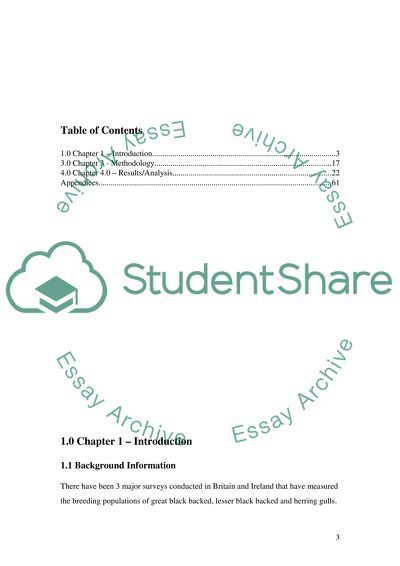 Download file to see previous pages ing gulls regionally, it was interesting to note that while the western colonies which were 10 times later than the eastern colonies in England during the seafarer census, the western colonies have declined by almost 27,000 pairs while the east coast colonies have steadily grown over the censuses. Although still much smaller than the west coast, it will be interesting to see if the decline in the west and increase in the east will continue. In striking contrast, at the seafarer census the east Scotland colonies were nearly three times those of the west coast. However, by the seabird census the populations on the east and west coast of Scotland were virtually identical. When examining the herring gull by latitude one of the greatest differences noted is the drastic decrease of the population in the 56-58N latitude in particular. The huge colonies present at Seafarer had been decimated by the seabird census. In fact, much of the herring gull population has seen a phenomenal decrease in the latter part of the 20th century.
Table of Contents
1.0 Chapter 1 - Introduction 3
3.0 Chapter 3 - Methodology 17
4.0 Chapter 4.0 - Results/Analysis 22
Appendices 61
1.0 Chapter 1 - Introduction
1.1 Background Information
There have been 3 major surveys conducted in Britain and Ireland that have measured the breeding populations of great black backed, lesser black backed and herring gulls. These are the Operation Seafarer surveys, conducted in 1969-70; the Seabird Colony Register census, conducted in 1985-87; and Seabird 2000, conducted in 1998-2002. By analysis of the differences in the numbers observed in these three surveys, it is possible to show variation in population trends over time of these three very closely related bird species.
Species...
This dissertation reveals that gulls are known to feed at areas of sewage outflow to the sea, such as in the Bristol Channel. It has been noted that they appear well adapted to feeding in polluted areas, as they have a well-developed detoxification system. There was a change in the numbers of lesser black backed gulls feeding at sewage outlets in South Wales, where a 289% increase in numbers between the 1970s and 1990s was observed in one study. However, it was also found that feeding from sewage outlets was overall much more common in black-headed gulls than lesser black backed or herring gulls, with 11% of the population of black headed gulls feeding at sewage outlets, compared to 3% for herring gulls and 7% for lesser black backed gulls.
In conclusion, there was also a difference in feeding patterns throughout the year, with far more gulls feeding at sewage outlets during the summer, compared to winter. This has a particular significance in that the summer is when breeding pairs are incubating and caring for offspring, which could then be affected by the parental diet.
Refuse, whether sewage or on land, supports 43-75% of the diet of lesser black backed and great black backed gulls. However, it is often juvenile, non-breeding gulls that are found at sewage outlets, which means that offspring are less likely to be affected. There has been a link between salmonellae occurrence in gulls and the number of human cases in local hospitals, with this being linked to a similar contaminated food source, as opposed to direct infection.

CHECK THESE SAMPLES OF Population Trends in Larids

...?Population Trends in China Introduction China has been documented as the world’s most populous country, with a population of about 3 billion, which is about a fifth of the world’s population. The rapid growth in population has become a concern to the government, such that it has introduced various measures to curb the rate of growth. China therefore is a good case study in population growth trends, its analysis and prediction. This paper concentrates on population trends in China between 1950 and 2008, and outlines various models that could be used to represent the data....
13 Pages(3250 words)Math Problem

...is declining. The issues such as widespread death due to diseases like AIDS have dramatically influenced the population growth pattern of the country. Furthermore, the decline in population growth rate of the country is ascribed to lower expectancy rate, higher infant mortality and death rate. Migration has also significantly contributed towards the distribution of population in the country. The use of contraceptive has also significantly influenced the population growth trend in South Africa. The South African Population Policy was primarily adopted in 1994 which emphasize three broad areas including birth, death along with migration...
4 Pages(1000 words)Research Paper

...Geography Population Exercise Introduction The population statistics of a country are the fundamental measure of a country’s growth and development over time as it dictates how resources are shared among the available number of living persons in that country. The world statistics have portrayed a great difference in the population growth trends between developing and developed countries. Statistical parameters such as fertility rate, maternal mortality rate, life expectancy at a birth and infant mortality rate are used to quantize the potential of a population to grow and to predict the population trajectory. The interrelationship that...
4 Pages(1000 words)Research Paper

Not for Profit Plan

...Trends Trends One can see several emerging trends in the world of tomorrow. These include the invention of new alternatives to oil due to its rising cost. The growing concern for global warming will also lead to a shift from oil-based energy sources to greater advancements in wind and solar energy. Any business that has a positive effect on the environment stands to grow in the future (Wade, 2009). Another trend that the world will see is the increasing popularity of online shopping. With online banking getting the confidence of consumers, more people will prefer online shopping rather than go out and shop at malls (Wade, 2009). A vivid example of this is that...
1 Pages(250 words)Essay

...and under developed economies. The paper would, therefore, primarily be discussing the population trend and policy challenges for migration of people in Nigeria. Political and social background The socio-political and historical context of developing nations is hugely important issue for understanding the wider ramifications of internal and external migration of people across geographical borders. Nigeria has emerged as the most populous state of Africa with 158.3 million population and tenth most populated country in the world (IOM, 2011). Though it had gained independence in 1960 from colonial rulers, they had nevertheless, exploited the human...
5 Pages(1250 words)Essay

...Trends Trends Thomas Jefferson, the third President of the United s of America, mostly focused on expansion of the American territory and access to international markets. But his aims were interrupted when French leader, Napoleon Bonaparte, took control of Louisiana, and warned the American government that he will block America’s access to the valuable ports of New Orleans and Mississippi River. This proved to be a great hazard for the President Jefferson, and he went as far as signing an anti-French alliance with Britain. Along with this, various diplomats were sent to France to discuss the blockage of the ports, and the British government was also asked for help to work out other options. The chief...
2 Pages(500 words)Essay

...Task: Population Question one The population of Washington significantly increased during the years before 2008. Question two The increase in Washington State’s population had a number of implications on natural resources. There is an increasing concern over spreading effects of pollution from the high use of fuels by the increasing traffic. Greenhouse gases accumulation in the atmosphere pose a great threat to natural resources in the county. Question three The economy of Washington State, as illustrated from the benchmark results, experienced a number of positive progress and negative regression. The stable situations experienced in the national economy between the years 1995 and...
1 Pages(250 words)Essay

...Russian Population Pyramid Retrieved http www.indexmundi.com/russia/age_structure.html The Russian population and demographic composition is in a crisis as the countrys population decreases at an alarming rate. Specifically, the contributing factors to this decline include high infant mortality, low birth rates, immigration, poor health care services, low life expectancy and high alcohol consumption (Weir n.p; Stratfor. n.p). These demographic changes have a significant impact on the political and social landscape in the country. The combination of the immigration and generation factor strains the social services in the country. Encouraging youth immigration is one of the potential...
1 Pages(250 words)Assignment
sponsored ads
Save Your Time for More Important Things
Let us write or edit the dissertation on your topic "Population Trends in Larids" with a personal 20% discount.
GRAB THE BEST PAPER

Let us find you another Dissertation on topic Population Trends in Larids for FREE!