Comments (0)
Add to wishlistDelete from wishlist
Cite this document
Summary
The paper "The Arena Chapel as an Important Part of Italian Medieval Culture" states that Masaccio and Michelangelo did have their own concepts regarding paintings and art.  For Michelangelo, art does not always tell a story. Sometimes it works as a symbol, or a reflection, of something else…
Download full paperFile format: .doc, available for editing
HIDE THIS PAPERGRAB THE BEST PAPER98.3% of users find it useful 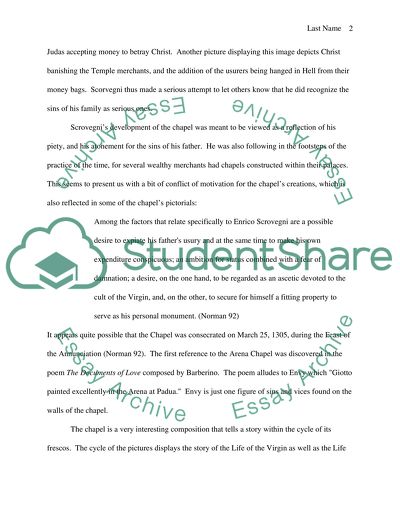 Download file to see previous pages The collection and distribution of money in order to obtain a profit, or using, was a very serious sin during this time period. Scorvegni thus more than likely had the chapel made in order to atone for his father's crimes. This was a way for Scorvegni to regain his family's name and thus to cleanse himself of anything his father may have done in the past. This can best be displayed by Scorvegni's dedication of the chapel in part to Santa Maria del Carita de Arena, the Virgin of Chastity, to try and remove the greedy stamp that had been applied to the family. Furthermore, within the Chapel itself, the sin of usury can be viewed in several of the chapel's frescoes. Perhaps the most powerful vision of this present in the chapel is the picture of Judas accepting money to betray Christ. Another picture displaying this image depicts Christ banishing the Temple merchants and the addition of the usurers being hanged in Hell from their money bags. Scorvegni thus made a serious attempt to let others know that he did recognize the sins of his family as serious ones.
Scrovegni's development of the chapel was meant to be viewed as a reflection of his piety, and his atonement for the sins of his father. He was also following in the footsteps of the practice of the time, for several wealthy merchants had chapels constructed within their palaces. This seems to present us with a bit of conflict of motivation for the chapel's creations, which is also reflected in some of the chapel's pictorials:
Among the factors that relate specifically to Enrico Scrovegni are a possible desire to expiate his father's usury and at the same time to make his own expenditure conspicuous; an ambition for status combined with a fear of damnation; a desire, on the one hand, to be regarded as an ascetic devoted to the cult of the Virgin, and, on the other, to secure for himself a fitting property to serve as his personal monument. (Norman 92)
It appears quite possible that the Chapel was consecrated on March 25, 1305, during the Feast of the Annunciation (Norman 92). The first reference to the Arena Chapel was discovered in the poem The Documents of Love composed by Barberino. The poem alludes to Envy which "Giotto painted excellently in the Arena at Padua." Envy is just one figure of sins and vices found on the walls of the chapel.
The chapel is a very interesting composition that tells a story within the cycle of its frescos. The cycle of the pictures displays the story of the Life of the Virgin as well as the Life of Christ. The presentation of the Virgin's story seems highly significant since the chapel itself is dedicated to the Virgin. Another interesting part of the chapel's dedication is the area reserved for the Virgin of the Annunciation, which also helps to contribute to the Annunciation on the Chancel Arch. The frescos here represent the end of the story of the Virgin and the beginning of the story of Christ (Cole 98).
The story starts on a higher level on the south wall, with Joachim and Anna, the parents of the Virgin. The story then progresses from east to west. Viewers first see the Expulsion of Joachim from the Temple and the finale of this occurrence, when Joachim and Anna discover each other at the Golden Gate. ...Download file to see next pagesRead More
Share:
Tags
Cite this document
(Arena Chapel Essay Example | Topics and Well Written Essays - 1750 words, n.d.)
Arena Chapel Essay Example | Topics and Well Written Essays - 1750 words. https://studentshare.org/culture/1502300-arena-chapel
(Arena Chapel Essay Example | Topics and Well Written Essays - 1750 Words)
Arena Chapel Essay Example | Topics and Well Written Essays - 1750 Words. https://studentshare.org/culture/1502300-arena-chapel.
“Arena Chapel Essay Example | Topics and Well Written Essays - 1750 Words”. https://studentshare.org/culture/1502300-arena-chapel.
Comments (0)
Click to create a comment or rate a document

Competing In The Global Arena

Influence of Michelangelo and the Sistine Chapel on Music

Global Resource Depletion: A Developing Focus in the Policy Arena

15 Pages(3750 words)Research Paper
sponsored ads
Save Your Time for More Important Things
Let us write or edit the essay on your topic "The Arena Chapel as an Important Part of Italian Medieval Culture" with a personal 20% discount.
GRAB THE BEST PAPER

Let us find you another Essay on topic The Arena Chapel as an Important Part of Italian Medieval Culture for FREE!