Comments (0)
Add to wishlist Delete from wishlist
Cite this document
Summary
The following paper "Cross-Cultural Transitions" is focused on the phenomenon of culture shock. According to Huang (2001), the memoir by Le Ly Hayslip titled when heaven and earth changed places was written in 1989…
Download full paper File format: .doc, available for editing
HIDE THIS PAPERGRAB THE BEST PAPER96.3% of users find it useful 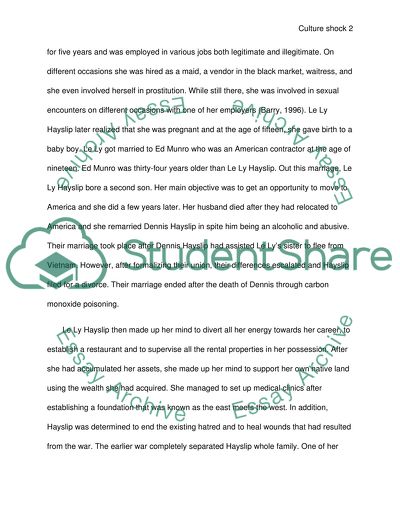 First, much of the theory was developed before the massive acceleration in change that has occurred since the development of computers. Second, different forms of media power create an overwhelming complexity that is difficult to fit within the theory. Third, the concept of “cultural imperialism” is ill-defined.
Before delving into the world of media forms and cultural imperialism it will be useful to exactly define how theory can and cannot help in an understanding of economic, cultural, political and social patterns. The concept of “cultural imperialism” moves well beyond any attempt at neatly defined disciplinary boundaries. It is perhaps the very ubiquity of western media in many parts of the world...
11 Pages (2750 words) Assignment

All the technologies have made it possible to pass on the influences of different cultures on each other. A Globalization index report (2006) prepared by A. T. Kearney Inc. states that ‘It’s a small world, and globalization is making it smaller, even in the face of conflict and chaos.’ The report points out the newest boundary of Globalization as BRIC, an acronym for Brazil, Russia, India, and China. This report spells out the prediction that ‘if things go right then in less than 40 years, the BRIC economies together could even exceed even the economies of G6 nations (Group of Six, a group of industrialized nations; France, Germany, United States, Japan, United Kingdom, Italy). Creating an atmosphere for su...
6 Pages (1500 words) Essay

As a function of this, this book proved to be a pivotal and seminal work within the genre of cross-cultural understanding as, even though it was a novel, it helped to open the eyes of many in and around the country as to the unique set of situations that individuals experienced as a function of not only being bi-racial and living in a juxtaposition of two alternate societies but attempting to draw a sense of personal identity between the two and forging a third as a result. Furthermore, although not the express intent of the book, the issues of assimilation and the firm choice that the second generation immigrant must make between the culture of their parents and the unique aspects of the culture that they have been raised into.
sponsored ads
Save Your Time for More Important Things
Let us write or edit the research paper on your topic "Cross Cultural Transitions" with a personal 20% discount.
GRAB THE BEST PAPER

Let us find you another Research Paper on topic Cross Cultural Transitions for FREE!