Comments (0)
Add to wishlistDelete from wishlist
Cite this document
Summary
Concentration of hydrogen peroxide at intervals of 5 minutes was recorded through the titration of the reaction mixture with standard potassium permanganate. Fe3+ acted as a catalyst. Graphs that complied with first order…
Download full paperFile format: .doc, available for editing
HIDE THIS PAPERGRAB THE BEST PAPER96.5% of users find it useful 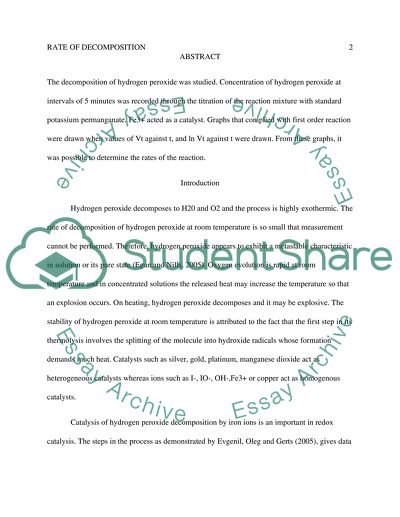 Lab report: Rate of decomposition of hydrogen peroxide The decomposition of hydrogen peroxide was studied. Concentration of hydrogen peroxide at intervals of 5 minutes was recorded through the titration of the reaction mixture with standard potassium permanganate. Fe3+ acted as a catalyst. Graphs that complied with first order reaction were drawn when values of Vt against t, and ln Vt against t were drawn. From these graphs, it was possible to determine the rates of the reaction.
Introduction
Hydrogen peroxide decomposes to H20 and O2 and the process is highly exothermic. The rate of decomposition of hydrogen peroxide at room temperature is so small that measurement cannot be performed. Therefore, hydrogen peroxide appears to exhibit a metastable characteristic in solution or its pure state (Egan and Nills, 2005). Oxygen evolution is rapid at room temperature and in concentrated solutions the released heat may increase the temperature so that an explosion occurs. On heating, hydrogen peroxide decomposes and it may be explosive. The stability of hydrogen peroxide at room temperature is attributed to the fact that the first step in its thermolysis involves the splitting of the molecule into hydroxide radicals whose formation demands much heat. Catalysts such as silver, gold, platinum, manganese dioxide act as heterogeneous catalysts whereas ions such as I-, IO-, OH-,Fe3+ or copper act as homogenous catalysts.
Catalysis of hydrogen peroxide decomposition by iron ions is an important in redox catalysis. The steps in the process as demonstrated by Evgenil, Oleg and Gerts (2005), gives data on the mechanisms of redox catalysis. This decomposition is also important in processes in living organisms. The decomposition may be represented as below;
2H2O2 (l) → 2H2O(l) + O2(g)
Method
Apparatus
200ml Dewar flask, Standard potassium permanganate solution, 2M sulphuric acid solution, Fe3+ solution catalyst, Pipette.
Procedure
25 mL of the ten‐volume hydrogen peroxide was dilute to about 200 ml with distilled water. A Dewar flask was rinsed with distilled water and then with a few mL of the dilute H2O2 solution. Hydrogen peroxide solution was added into the Dewar flask, and the solution temperature noted at a constant value. 10 ml of Fe3+(a) catalyst solution was added into the beaker while stirring gently. A stop watch was used to keep track of time.
Thirty seconds after the addition of the catalyst, 10 mL aliquot of the reaction solution was pipetted and transferred into an Erlenmeyer flask containing 18 mL of 2 M H2SO4. The acid provides an acid medium for the titration and also quenches the decomposition reaction. 10 mL samples were draw from the reaction mixture at 5 min intervals and titrated with potassium permanganate. The titration reaction follows the equation;
2MnO4 (aq) + 5H2O2 (aq) + 6H+(aq) → 2Mn2+(aq) + 5O2(g) + 8H2O(l)
The volumes of potassium permanganate were noted and recorded as per table 1(Laboratory Manual Semester 1, 2014).
Results
Table 1 Results from the titration
mins
Titre volume(Vt)
ln Vt
[A]
ln[A]
0
24.1
3.18221
1.24481
0.21899
5
36.3
3.59182
0.82645
-0.1906
10
45.8
3.82428
0.65502
-0.4231
15
6.6
1.88707
4.54545
1.51413
20
10.9
2.38876
2.75229
1.01243
25
13.6
2.61007
2.20588
0.79113
30
16
2.77259
1.875
0.62861
35
18
2.89037
1.66667
0.51083
40
19.8
2.98568
1.51515
0.41552
45
21
3.04452
1.42857
0.35667
Discussions
From the results obtained in table 1, the plot of the volume Vt versus the time t is a smooth curve from 15minutes to 45minutes (Egan and Nills, 2005).
Figure 1 The plot of Vt against time t
Reaction rate at 5 minutes
Reaction at 25 minutes

Reaction rate at 45minutes
The reaction rate increased with time but eventually remained constant during the decomposition. This can be attributed to the fact that the rate of decomposition of hydrogen peroxide and the removal of its by-products was efficient therefore the reaction mixture maintained a constant reaction rate
Figure 2 The plot of [H2O2] against time(minutes
Figure 3 Plot of ln Vt against t (mins)
Rate Constant k= = (3-2.5)15 = 0.03333min-1
From the results obtained the plot of ln Vt against time t is linear. This conforms to expected first order reaction of graphs. The iron catalyst does not initiate the decomposition of hydrogen peroxide. Hydrogen peroxide decomposes even in the absence of the Fe3+ though the amounts of O2 liberated is negligible for measurement. The Fe3+ provides adsorption sites thereby increasing the rate of reaction (Evgeny T. Denisov, Igor B. Afanasev).
Temperature has a high influence on the rate of reaction. Depending on whether the reaction is exothermic or endothermic the temperature will either increase or decrease the rate of reaction respectively. In the case of hydrogen peroxide, an increase in temperature will increase the rate of reaction. Egan and Nills, (2005), explain that at room temperature the thermolysis of H2O2 takes place at high temperatures as it follows the formation of hydroxide radicals.
Conclusion
The rate of reaction can be estimated using an elaborate laboratory experiment. In this experiment by measuring the concentration of hydrogen peroxide at specific time intervals it has been possible to find the rate of reaction and the reaction constant. Also, graphs that comply with the first order reaction have been obtained.
References
Egon, W. & Nils, W. (2001). Inorganic Chemistry. Pg. 449. Academic press copyright, 2001.
Evgeniĭ, T. Denisov & Oleg M. S. Gert︠s︡, I. (2005) Chemical Kinetics: Fundamentals and New Developments. Elsevier science.
Evgeny, T. D. & Igor, B. A. (2000) Oxidation and Antioxidants in Organic Chemistry and Biology. New York: Wiley.
Shu- Sung Lin and Mirat D. Gurol (1998). Catalytic Decomposition of Hydrogen Peroxide on Iron Oxide: Kinetics, Mechanism, and Implications. Environ. Sci. Technol. (32). Pp 417- 1423
Chemistry 1a (Che1c1a). Laboratory Manual Semester 1, 2014 Read More
Share:
Tags
Cite this document
(“RATEOFDECOMPOSITIONOFHYDROGENPEROXIDE Lab Report”, n.d.)
RATEOFDECOMPOSITIONOFHYDROGENPEROXIDE Lab Report. Retrieved from https://studentshare.org/chemistry/1647470-rateofdecompositionofhydrogenperoxide

CHECK THESE SAMPLES OF RATEOFDECOMPOSITIONOFHYDROGENPEROXIDE

This is 14 different Literature analysis's that would be used in a thesis. Each completed review is 3/4 a page in length

...?Chen, Beck, and Amos (375-379) studied Leadership Styles and Nursing Faculty Job Satisfaction in Taiwan. They claimed that most nursing faculties choose the leaders depending on academic performance, which results in unprepared or incompetent nursing deans and department heads. Chen, Beck, and Amos (376) study aimed at determining job satisfaction amongst nurses in Taiwan. The study explored how faculty nurses perceived leadership styles of their nursing deans and directors. The study was descriptive, correlational, and cross-sectional and entailed use of self-administered questionnaires. 18 schools offering nursing programs participated and 286 of the 400 distributed, which was equivalent to of 73% response, 93.7% being female while 18... Beck, and...
10 Pages(2500 words)Research Paper

...? Full Paper Introduction The industries, factories, organizations, SME’s are in a revolutionary phase with significantly aid of information technology. The manual procedures, that were conducted by physical interaction is now integrated in to computerized software programs and systems. The automation processes are achievable by only few mouse clicks. As any other organization, Club IT can utilize information technology to compete in today’s digital competitive world. There are many organizations generating healthy benefits by modifying their business models and strategies. More explicitly, “Organizations can leverage their platforms to develop new Web-based applications, services and products, as well as to provide superb customer service... Full...
3 Pages(750 words)Essay

The Social causes of Poverty in California

...1. of company – Walt-Mart Corporation Stock Symbol – WMT Principal stock exchange where the company trades – NYSE Market price of the stock as of - $54.13 on December 15, 2010 at 11:39 A.M. EST (Yahoo, 2010) Annual Dividend - $0.3025 Last dividend paid on – September 7, 2010 2. The MD&A reports state that Wal-Mart is pursuing an organic growth model in order to continue to grow globally. The company has earned the trust of the customer by providing a wide variety of products at rock bottom prices. The focus of the company is to provide exceptional value to its customers. The company is divided into business segments: Walt-Mart US, International, and Sam’s Club. Its US operation generated 63.8% of the company’s revenues. The company’s... of company –...
2 Pages(500 words)Research Paper

...Laws Part1 In human life, there is the fundamental right to practice or participate in religion of one’s choice. This law ensures that every human being recognize and respect beliefs, practices and religious actions of fellow men, thus promoting social understanding, peaceful coexistence and respect (Tyler, 2006). This makes life enjoyable and meaningful since there is no hatred or discrimination to human beings due to their beliefs and faith. In the case of the warden jail and the Latin Kings gang members, there arises two issues; the freedom to practice religion and the observance of the jail rules and conditions. The gang members had sewn black and gold emblems on the prison issue shirts. This prompted the jail management to establish... Part1 In...
1 Pages(250 words)Essay

...Sony’s Management Style Sony’s Management Style Sony Corporation is a Japanese firm that uses the design and consensus management styles. The design management style is based on business principles that focus on an organization’s mission and goals. The design management style at Sony is focused on harnessing Sony’s core ability of simplification. The style also supports techniques that enable the systematic pursuit of functionality and beauty. The Japanese multinational founded by Akio Morita and Masaru Ibuka. One of Sony’s outstanding and innovative products is the Walkman. Sony’s competency is its ability to use miniaturization technologies (Nagasawa, 2013). Currently, the management of the firm is focused on the creation of management... Management...
5 Pages(1250 words)Essay
sponsored ads
Save Your Time for More Important Things
Let us write or edit the lab report on your topic "RATEOFDECOMPOSITIONOFHYDROGENPEROXIDE" with a personal 20% discount.
GRAB THE BEST PAPER

Let us find you another Lab Report on topic RATEOFDECOMPOSITIONOFHYDROGENPEROXIDE for FREE!