Comments (0)
Add to wishlistDelete from wishlist
Cite this document
Summary
From the paper "Pre-Lab-Tyrone Hayes Discussion on Atrazine" it is clear that there are a number of ways that crop yield can be increased without the use of chemical treatments. These methods include crop and water management, farm manure, zero-tillage and crop rotation…
Download full paperFile format: .doc, available for editing
HIDE THIS PAPERGRAB THE BEST PAPER95.3% of users find it useful 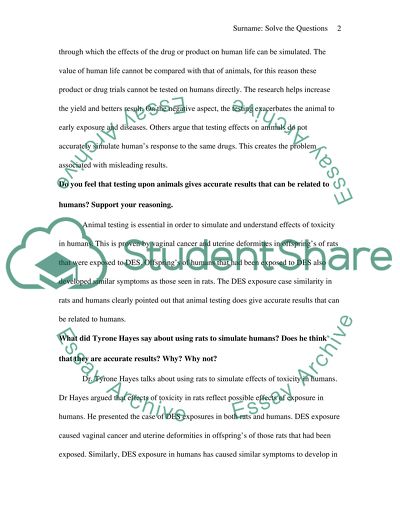 In a few sentences please describe the problem that Dr Tyrone Hayes is talking about in his lecture.
The problems Dr Tyrone Hayes is talking about in his lecture relates to the harmful effects of pesticides and other chemicals. The concentration of chemicals to waters is a harmful process. Concentrations of these pesticides within living organisms then provide a breeding place for the cancer cells. The concentration of various chemical causes dysfunctions. This pertains to the non-functionality of some of the body organs and growth irregularity.
What was the part of the video that was most intriguing to you?
The most intriguing part of the video was the scientific manner in which the toxic effects of atrazine and DES were related in rats to humans. The fact that smaller creatures are able to simulate and identify potential effects of pesticide exposure on humans is most intriguing.
Overall Questions
Discuss the pros and cons of animal testing. Do you think that testing on animals is justified?
Animal testing is an integral part of the product and drug trails before their commercialization. The benefits of testing animals are the fact that it acts as a prototype through which the effects of the drug or product on human life can be simulated. The value of human life cannot be compared with that of animals, for this reason, these product or drug trials cannot be tested on humans directly. The research helps increase the yield and betters result. On the negative aspect, the testing exacerbates the animal to early exposure and diseases. Others argue that testing effects on animals do not accurately simulate human’s response to the same drugs. This creates a problem associated with misleading results.
Do you feel that testing upon animals gives accurate results that can be related to humans? Support your reasoning.
Animal testing is essential in order to simulate and understand the effects of toxicity in humans. This is proven by vaginal cancer and uterine deformities in offspring of rats that were exposed to DES. Offspring’s of humans that had been exposed to DES also developed similar symptoms as those seen in rats. The DES exposure case similarity in rats and humans clearly pointed out that animal testing does give accurate results that can be related to humans.
What did Tyrone Hayes say about using rats to simulate humans? Does he think that they are accurate results? Why? Why not?
Dr Tyrone Hayes talks about using rats to simulate the effects of toxicity in humans. Dr Hayes argued that effects of toxicity in rats reflect possible effects of exposure in humans. He presented the case of DES exposures in both rats and humans. DES exposure caused vaginal cancer and uterine deformities in offspring of those rats that had been exposed. Similarly, DES exposure in humans has caused similar symptoms to develop in offspring. Similarly, Atrazine exposure in humans can cause the same effects that it causes in rats.
If you were a farmer that dependent on the high yield of crops for a living do you think that you would use atrazine on your crops? Assume that using herbicides and pesticides would ensure that your yield produced is enough to sustain your business.
The usage of atrazine on crop production is dangerous. Atrazine has been found to cause prostate and mammary cancer, immune failure and abortion in rats. It is clinically known that rats simulate human effects. Since the use of other herbicides and pesticides are sufficient to sustain a business, then the use of atrazine is not justified. For this reason, I as a farmer would take up alternate practices to increase crop yield instead of using atrazine. Read More
Share:
Tags
Cite this document
(Pre-Lab-Tyrone Hayes Discussion on Atrazine Assignment - 2, n.d.)
Pre-Lab-Tyrone Hayes Discussion on Atrazine Assignment - 2. Retrieved from https://studentshare.org/chemistry/1592736-solve-the-questions
(Pre-Lab-Tyrone Hayes Discussion on Atrazine Assignment - 2)
Pre-Lab-Tyrone Hayes Discussion on Atrazine Assignment - 2. https://studentshare.org/chemistry/1592736-solve-the-questions.
“Pre-Lab-Tyrone Hayes Discussion on Atrazine Assignment - 2”, n.d. https://studentshare.org/chemistry/1592736-solve-the-questions.
Comments (0)
Click to create a comment or rate a document

CHECK THESE SAMPLES OF Pre-Lab-Tyrone Hayes Discussion on Atrazine

... consistent. They do not get mired in advertising clutter or conflicting communication. 6 6) If the brand is part of a portfolio, it plays a truly complementary role to optimize overall equity. 7) The brand uses an assortment of tools to build equity. 8) Managers of these brands know exactly what their brand image is all about. 9) Managers of these brands do what ever is required to keep up the tempo. 10) The sources of the brands are constantly watched. To know if a business has just a name or a brand, and if it is a brand, whether it is a strong brand, it could be assessed against this score card. (Keller 2000) Part 2 Internet Marketing Strategy Alison Hayes claims to be a leading manufacturer of ladies' clothing in the UK...
17 Pages(4250 words)Term Paper

... was repeated. The crystals were then spread evenly over the filter paper. An aspirator was used for 10 minutes to dry the crystals. A clean beaker was weighed. The crystals were transferred to the beaker and the beaker was weighed again. Results Weight of aluminum used in the experiment = 0.996 g Volume of 1.4 M KOH used = 50 mL Volume of 9.0 M H2SO4 used = 20 mL Weight of the empty beaker = 95.77 g Weight of potassium aluminum sulfate dodecahydrate and beaker = 109.60 g Weight of potassium aluminum sulfate dodecahydrate obtained= 13.83 g Discussion An aluminum surface reacts with atmospheric oxygen to form an inert oxide layer, which makes the metal corrosion resistant. This resistance is enhanced by anodizing: immersing in sulfuric...
2 Pages(500 words)Essay

... In a few sentences please describe the problem that Dr. Tyrone Hayes is talking about in his lecture Dr. Tyrone is advocating for a healthier environment by avoiding the use of pesticides and other chemicals that are destructive and have vast health side effects to the environment. As a professor he is more concerned with the role of these environmentally based chemical contaminants in the overall amphibians. The chemical health hazards that Hayes talks about is the health differences that occurs specifically in the minority and the low-slung income populace all over the world (Farshād 148). 2. What was the part of the video that was the most intriguing to you? The intriguing part of the video is the research on the developing male...
1 Pages(250 words)Movie Review

... Discussion question From the other car’s reference frame, our car is moving at a constant speed of; Our car was travelling at a constant speed hence its acceleration from the other car’s frame of reference is zero. The other car will also have an acceleration of zero as measured from our car’s reference frame. The reason is that both cars did not accelerate hence the car will be moving at a constant speed of -20km/hr as observed from our car. 2. a) Since the large box is not moving, the net force between me and a large box is zero hence the magnitude of force between me and the box are equal and opposite. b) The second box, however is much lighter, does not accelerate the magnitude of force between me and this second box hence is still...
1 Pages(250 words)Lab Report

..., the IASB issued a two-part discussion paper in its invitation to comment on fair value measurement. In introducing the said discussion paper, Sir David Tweedie, the IASB Chairman, emphasised that usage of fair value in financial reporting “is of great interest to preparers, auditors, users and regulators” and that there is a need “to establish a clear international definition of fair value and a consistent framework for measuring it” (Discussion Paper, 2006). The number of comments received by the IASB for this discussion paper reached 136 and came from all sectors that are affected by fair value measurement. Fair value measurement, however, has also been subjected to various criticisms due to its perceived shortcomings. According...
8 Pages(2000 words)Term Paper
sponsored ads
Save Your Time for More Important Things
Let us write or edit the assignment on your topic "Pre-Lab-Tyrone Hayes Discussion on Atrazine" with a personal 20% discount.
GRAB THE BEST PAPER

Let us find you another Assignment on topic Pre-Lab-Tyrone Hayes Discussion on Atrazine for FREE!