Comments (0)
Add to wishlist Delete from wishlist
Cite this document
Summary
One of the major the factor that can be measured effectively is the age of the gravestone. Through calibrated relative dating, that involves…
Download full paper File format: .doc, available for editing
HIDE THIS PAPERGRAB THE BEST PAPER96.9% of users find it useful 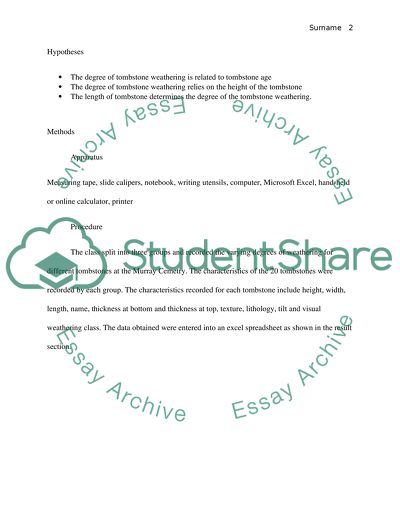 A line of best fit, as shown in the graph, indicates that there is a considerable relationship between weathering class and length. The graph shows that an increase observed in length leads to an increase in weathering class. The positive gradient shows that there is a positive relationship between the two.
Discussion
The results obtained were able to support the initially listed hypotheses. For age, there was observed consistency in its relationship with weathering class as shown in the graph. Hence, from the methodology used, the hypothesis “The degree of tombstone weathering is related to tombstone age” is sufficiently supported because there was observed consistency with a positive gradient. The results supported hypothesis two which stated that “The degree of tombstone weathering relies on the height of the tombstone” given that there was a general trend. It was shown that the degree of weathering increased with increase in height. The same was detected as shown in the graph, which supported the fact that length is factor in determining the weathering degree. The results show that that an increase observed in length leads to increase in degree of weathering.
Intuitively, the above model has proved successful in predicting the age of a tombstone. In which case, weathering class can be used sufficiently in determining whether a tombstone is young or old. As weathering degree increases the implication is that age will also be increasing. The older tombstone have more weathering degree than the younger tombstone.
However, the lab may have been ineffective and filled with errors, especially when supporting the first hypothesis. The error arose when rating the ages based on weathering classes. Some old rocks were given high ratings while some newer rocks were given low ratings hence leading to the observed inconsistency. This inconsistency may be contributed to randomness used when choosing the tombstones. Consistency can be assured by making use of age groupings at intervals.
Conclusion
From the lab, it was observed that the degree of tombstone weathering relies on the height and the length of the tombstone. The results also proved that weathering degree can be used as model for predicting age of a tombstone. Read More
Share:
Tags
Cite this document
(“Geomorphology Lab 3 Report Example | Topics and Well Written Essays - 500 words”, n.d.)
Retrieved from https://studentshare.org/geography/1677322-geomorphology-lab-3

CHECK THESE SAMPLES OF Geomorphology Lab 3

... 13 Mar. 2008 FLUVIAL GEOMORPHOLOGY INTRODUCTION Geomorphology is the study of landforms and the processes that shape them. Fluvial Geomorphology is the study of role of rivers in forming the morphology of the earth. In short it is the study of landform evolution related to rivers. Rivers are significant geo morphological agents, they show an amazing diversity of form and behavior and transfer water and sediment from the land surface to the oceans. Highly dynamic in nature, river channels adjust and evolve over timescales that range from hours to tens of thousands of years or more and are found in a wide range of environments. An understanding of fluvial geomorphology has proved its use in channel preservation, environmentally sensitive...
8 Pages (2000 words) Essay

... compartments on the two sides of the cell: inside and outside. There are specific functions for proteins embedded in the interior of the phospholipid bilayer. They carry out various functions such as selective transport of molecules and cell to cell identification. Thus, the main function of the plasma membrane is to control the active and passive movement of various substances into and out of the cell. 3. Describe the differences between animal and plant cells.  The main difference between animal and plant cells is the presence of a cell wall in plant cells which has a rigid, rectangular-shaped structure.  A cell wall is composed of cellulose, hemicellulose, lignin, enzymes and structural proteins. Animal cells do not have cell wall...
5 Pages (1250 words) Essay

This paper explores the process of geomorphology.
The processes of the surface are made up of wind, water, fire, ice, and living things on the earth surface. The chemical reactions forming soils and altering the stability, material, and topographical rate of change under gravitational force are some of the surface processes. These factors are strongly affected by climate. The geological processes are the mountain range uplift, volcanic growth, isostatic changes in the elevation of land surfaces, sedimentary basins formation are also surface processes. The surface of the earth together with the topography form an intersection of climatic, biologic, and hydrologic action with the processes of geology.
The huge topographies f...
6 Pages (1500 words) Lab Report

This problem affects many Americans. The term ‘IPV’ can be used to describe the sexual, physical, or psychological harm from a former or current spouse or partner. The violence can happen in same sex or heterosexual couples and does not need any sexual intimacy. The four types of IPV include physical violence, sexual violence, emotional or psychological violence, and threats of sexual or physical violence.
These definitions are important because they help in monitoring the IPV incidences and examining the trends for certain duration of time. The definitions help in determining the potential of IPV and making the comparison of the problems in the whole jurisdiction. Fine definitions assist researchers in measuring the protectiv...
6 Pages (1500 words) Lab Report

Misrepresentation of Women in Cinema

... mantle, rising if material such as an ice cap is removed and sinking if material is deposited. Isostacy is seen in areas in which ice bergs have melted since the formation of ice bergs can lead to sinking of the earth’s surface. Retreating of the ice bergs leads to the reduction of the load on the lithosphere and the asthenosphere and they move back to their equilibrium levels. 3. Why do the erosion of mountains eventually expose the underlying basement rocks? Continuous erosion of mountains washes away all the soil and rock particles that forms the mountains. They are washed to the lower valleys leading to exposure of the underlying basement as the mountains are gradually reduced. 4. Can you draw a cross-section of Earth on the board...
2 Pages (500 words) Coursework

... Information: Semester: Due GSC336, Lab Report: Driving and Resisting Forces Lab Objective: To gain a deeper understanding of Driving and Resisting Forces, by building a simple model and applying the knowledge acquired in class. Lab Specific Goals: a. To learn and apply geomorphology’s unifying concept, driving and resisting forces. b. To review the various trigonometric functions and constitutive equations c. To learn how to build equations, simple models and graphical plots in Microsoft Excel. Lab Requirements: a. Computer, b. Microsoft Excel, c. Hand-held or online calculator, d. Printer. Procure 1. The Lab 1 Microsoft Excel worksheet was downloaded from the “Module 1” in Canvas. 2. The was opened in worksheet in Microsoft Excel...
2 Pages (500 words) Lab Report

... Introduction The onset of radio-carbon dating has made it possible to precisely determine the age of an organism which formerly lived. Through taking the ratio of carbon-12 to carbon-14 in a particular sample and then benchmarking it to the living organism’s ratio, an individual is able to determine the age. In which case, another important aspect applied is half-life, which is the time taken by half of the sample to decay and is denoted by t1/2. Objective This lab was designed specifically, with a major objective of developing a more comprehensive and hands-on understanding of radiocarbon dating. From this, the specific goals are as follows: Understand half-life and radio-carbon dating Know the difference between radiocarbon ages...
2 Pages (500 words) Lab Report

... that causes the flow of current. Consequently, the complex nature of the variability calls for a study, which can provide a succinct explanation to the basis of this phenomenon. In this lab, the major objective is to gain an understanding of how stream chemistry varies with respect to position in a drainage basin. Specific goals 1. Develop a hypothesis. 2. Sample stream waters and learn how to measure pH and EC in the lab. 3. Learn how to calibrate a lab instrument. 4. Test hypothesis using stream chemistry results. Hypothesis The stream chemistry (pH and EC) changes due to change in position External factors such as pollutants contribute to the influence of position on stream chemistry. Expected outcomes The pH and EC will change...
2 Pages (500 words) Lab Report
sponsored ads
Save Your Time for More Important Things
Let us write or edit the lab report on your topic "Geomorphology Lab 3" with a personal 20% discount.
GRAB THE BEST PAPER

Let us find you another Lab Report on topic Geomorphology Lab 3 for FREE!