Comments (0)
Add to wishlistDelete from wishlist
Cite this document
Summary
In today's volatile environment, an organization's employees are considered as one of the most important assets that the company possesses. The human resource existing in an organization is so important that specific departments are now established in all multinationals and organizations across the world to facilitate the flow of proper human resource in the organization…
Download full paperFile format: .doc, available for editing
HIDE THIS PAPERGRAB THE BEST PAPER95.8% of users find it useful 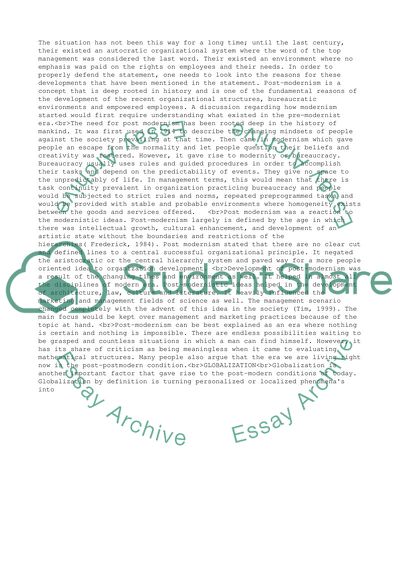 Download file to see previous pages The situation has not been this way for a long time; until the last century, their existed an autocratic organizational system where the word of the top management was considered the last word. Their existed an environment where no emphasis was paid on the rights on employees and their needs. In order to properly defend the statement, one needs to look into the reasons for these developments that have been mentioned in the statement. Post-modernism is a concept that is deep rooted in history and is one of the fundamental reasons of the development of the recent organizational structures, bureaucratic environments and empowered employees. A discussion regarding how modernism started would first require understanding what existed in the pre-modernist era.
The need for post modernism has been rooted deep in the history of mankind. It was first used in 1914 to describe the changing mindsets of people against the society prevailing at that time. Then came in modernism which gave people an escape from the normality and let people question their beliefs and creativity was fostered. However, it gave rise to modernity or bureaucracy. Bureaucracy usually uses rules and guided procedures in order to accomplish their tasks and depend on the predictability of events. They give no space to the unpredictably of life. In management terms, this would mean that there is task continuity prevalent in organization practicing bureaucracy and people would be subjected to strict rules and norms, repeated preprogrammed tasks and would be provided with stable and probable environments where homogeneity exists between the goods and services offered.
Post modernism was a reaction to the modernistic ideas. Post-modernism largely is defined by the age in which there was intellectual growth, cultural enhancement, and development of an artistic state without the boundaries and restrictions of the hierarchies( Frederick, 1984). Post modernism stated that there are no clear cut and defined lines to a central successful organizational principle. It negated the aristocratic or the central hierarchy system and paved way for a more people oriented idea to organization development.
Development of post-modernism was a result of the changing times and environment as well. It helped in almost all the disciplines of modern era. Post-modernistic ideas helped in the development of architecture, law, culture and literature. It heavily influenced the marketing and management fields of science as well. The management scenario changed completely with the advent of this idea in the society (Tim, 1999). The main focus would be kept over management and marketing practices because of the topic at hand.
Post-modernism can be best explained as an era where nothing is certain and nothing is impossible. There are endless possibilities waiting to be grasped and countless situations in which a man can find himself. However, it has its share of criticism as being meaningless when it came to evaluating mathematical structures. Many people also argue that the era we are living right now is the post-postmodern condition.
GLOBALIZATION
Globalization is another important factor that gave rise to the post-modern conditions of today. Globalization by definition is turning personalized or localized phenomena's into ...Download file to see next pagesRead More
Share:
Tags
Cite this document
(“Employee Performance Essay Example | Topics and Well Written Essays - 3000 words”, n.d.)
Employee Performance Essay Example | Topics and Well Written Essays - 3000 words. Retrieved from https://studentshare.org/business/1532606-employee-performance

CHECK THESE SAMPLES OF Employee Performance

... and monetary considerations. Companies are not ready to cooperate in disclosing information or in opening its door for consultation in a wider scope. They somewhat resist the idea of a global information and consultation procedure as this may strengthen the bargaining power of employees—diminishing employer’s control. As a result, these worldwide structures fail to meet the expected performance and output needed from them. This unsatisfactory result of the current arrangements only indicates the further need for innovation in labor representation. Without a doubt, information and consultation of employees should not only be regulated in the local or regional level. It must transcend national borders in order to foster close involvement...
9 Pages(2250 words)Coursework

In essence, employee commitment means loyalty to the employer and is one of the aspects that signify successful employee relations. The employer must be ready to reciprocate the commitment of employees for satisfaction in the workplace to be accomplished. This paper presents a critical assessment of some issues which may arise for the management researcher investigating the extent of employee commitment in a large multinational organization. It focuses on some of the factors that affect employee commitment in multinational organizations such as employee satisfaction, retention, career ladders, job security, employment relations, cultural diversity and empowerment of the human resources.
Employee satisfaction is a significant...
8 Pages(2000 words)Essay
sponsored ads
Save Your Time for More Important Things
Let us write or edit the essay on your topic "Employee Performance" with a personal 20% discount.
GRAB THE BEST PAPER

Let us find you another Essay on topic Employee Performance for FREE!