Comments (0)
Add to wishlistDelete from wishlist
Cite this document
Summary
Coaching Plan for Addressing a Key Employee Behaviour Introduction Most employees particularly the managers fail to realize the reasons behind their employees’ underperformance and think that they can resolve the issue by firing such employees. However, the cost of substituting human resource ends up being high thus, managers are advised to adopt other options such as coaching to locate the actual problem and solve it…
Download full paperFile format: .doc, available for editing
HIDE THIS PAPERGRAB THE BEST PAPER93.2% of users find it useful 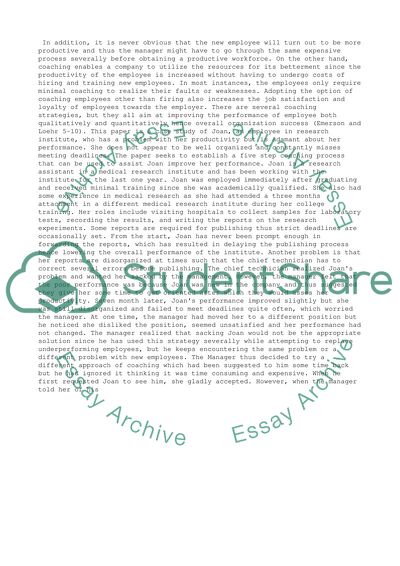 Download file to see previous pages In addition, it is never obvious that the new employee will turn out to be more productive and thus the manager might have to go through the same expensive process severally before obtaining a productive workforce. On the other hand, coaching enables a company to utilize the resources for its betterment since the productivity of the employee is increased without having to undergo costs of hiring and training new employees. In most instances, the employees only require minimal coaching to realize their faults or weaknesses. Adopting the option of coaching employees other than firing also increases the job satisfaction and loyalty of employees towards the employer. There are several coaching strategies, but they all aim at improving the performance of employee both qualitatively and quantitatively hence overall organization success (Emerson and Loehr 5-10). This paper is a case study of Joan, an employee in research institute, who has a problem with her productivity but is adamant about her performance. She does not appear to be well organized and constantly misses meeting deadlines. The paper seeks to establish a five step coaching process that can be used to assist Joan improve her performance. Joan is a research assistant in a medical research institute and has been working with the institute for the last one year. Joan was employed immediately after graduating and received minimal training since she was academically qualified. She also had some experience in medical research as she had attended a three months attachment in a different medical research institute during her college training. Her roles include visiting hospitals to collect samples for laboratory tests, recording the results, and writing the reports on the research experiments. Some reports are required for publishing thus strict deadlines are occasionally set. From the start, Joan has never been prompt enough in forwarding the reports, which has resulted in delaying the publishing process hence lowering the overall performance of the institute. Another problem is that her reports are disorganized at times such that the chief technician has to correct several errors before publishing. The chief technician realized Joan’s problem and wanted her sacked by the management. However, the manager felt that the poor performance was because Joan was new in the company and thus suggested they give her some time to get oriented after which they would asses her productivity. Seven month later, Joan’s performance improved slightly but she was still disorganized and failed to meet deadlines quite often, which worried the manager. At one time, the manager had moved her to a different position but he noticed she disliked the position, seemed unsatisfied and her performance had not changed. The manager realized that sacking Joan would not be the appropriate solution since he has used this strategy severally while attempting to replace underperforming employees, but he keeps encountering the same problem or a different problem with new employees. The Manager thus decided to try a different approach of coaching which had been suggested to him some time back but he had ignored it thinking it was time consuming and expensive. When he first requested Joan to see him, she gladly accepted. However, when the manager told her of his ...Download file to see next pagesRead More
Share:
Tags
Cite this document
(“Coaching Plan for Addressing a Key Employee Behavior Term Paper”, n.d.)
Coaching Plan for Addressing a Key Employee Behavior Term Paper. Retrieved from https://studentshare.org/business/1452795-coaching-plan-for-addressing-a-key-employee
(Coaching Plan for Addressing a Key Employee Behavior Term Paper)
Coaching Plan for Addressing a Key Employee Behavior Term Paper. https://studentshare.org/business/1452795-coaching-plan-for-addressing-a-key-employee.
“Coaching Plan for Addressing a Key Employee Behavior Term Paper”, n.d. https://studentshare.org/business/1452795-coaching-plan-for-addressing-a-key-employee.
Comments (0)
Click to create a comment or rate a document

...1. Assess the key macro factors that have influenced the UK grocery retailing industry since the early 1960s. The concept of organisational change is inherently intertwined with external threats and opportunities, which businesses must adapt to as part of strategic planning to continue long term growth. Senior and Fleming argue that the concept of organisational change has many faces, namely “convergent changes and transformational change that is organisation wide and characterised by radical shifts in strategy, mission values and associated changes of structures and systems” (In Thompson & Martin, 2005, p.41). Moreover, Johnson et al highlight that external macro-economic factors intrinsically impact strategy management and without...
13 Pages(3250 words)Assignment

In essence, employee commitment means loyalty to the employer and is one of the aspects that signify successful employee relations. The employer must be ready to reciprocate the commitment of employees for satisfaction in the workplace to be accomplished. This paper presents a critical assessment of some issues which may arise for the management researcher investigating the extent of employee commitment in a large multinational organization. It focuses on some of the factors that affect employee commitment in multinational organizations such as employee satisfaction, retention, career ladders, job security, employment relations, cultural diversity and empowerment of the human resources.
Employee satisfaction is a significant...
8 Pages(2000 words)Essay
sponsored ads
Save Your Time for More Important Things
Let us write or edit the term paper on your topic "Coaching Plan for Addressing a Key Employee Behavior" with a personal 20% discount.
GRAB THE BEST PAPER

Let us find you another Term Paper on topic Coaching Plan for Addressing a Key Employee Behavior for FREE!