Comments (0)
Add to wishlistDelete from wishlist
Cite this document
Summary
The paper presents a detailed analysis of the business strategies of Manchester United Ltd, a premier football club in the United Kingdom. The two models that have been discussed in this paper regarding the external environment of Manchester United (MU) are the SWOT analysis and PESTLE analysis…
Download full paperFile format: .doc, available for editing
HIDE THIS PAPERGRAB THE BEST PAPER98.4% of users find it useful 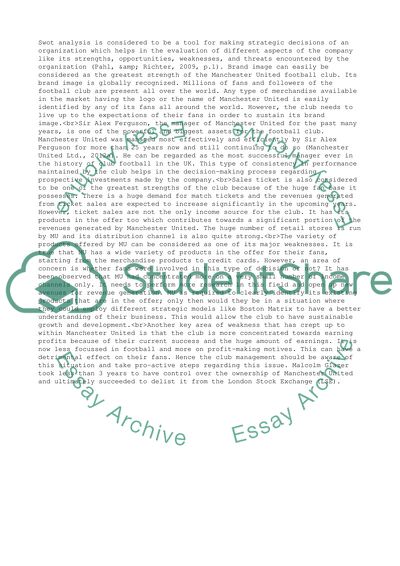 Download file to see previous pages Swot analysis is considered to be a tool for making strategic decisions of an organization which helps in the evaluation of different aspects of the company like its strengths, opportunities, weaknesses, and threats encountered by the organization (Pahl, & Richter, 2009, p.1). Brand image can easily be considered as the greatest strength of the Manchester United football club. Its brand image is globally recognized. Millions of fans and followers of the football club are present all over the world. Any type of merchandise available in the market having the logo or the name of Manchester United is easily identified by any of its fans all around the world. However, the club needs to live up to the expectations of their fans in order to sustain its brand image.
Sir Alex Ferguson, the manager of Manchester United for the past many years, is one of the powerful and biggest assets for the football club. Manchester United was managed most effectively and efficiently by Sir Alex Ferguson for more than 25 years now and still continuing to do so (Manchester United Ltd., 2012a). He can be regarded as the most successful manager ever in the history of club football in the UK. This type of consistency in performance maintained by the club helps in the decision-making process regarding prospective investments made by the company.
Sales ticket is also considered to be one of the greatest strengths of the club because of the huge fan base it possesses. There is a huge demand for match tickets and the revenues generated from ticket sales are expected to increase significantly in the upcoming years. However, ticket sales are not the only income source for the club. It has its products in the offer too which contributes towards a significant portion of the revenues generated by Manchester United. The huge number of retail stores is run by MU and its distribution channel is also quite strong.
The variety of products offered by MU can be considered as one of its major weaknesses. It is true that MU has a wide variety of products in the offer for their fans, starting from the merchandise products to credit cards. However, an area of concern is whether fans were involved in this type of decision or not? It has been observed that MU had concentrated more on a very small number of income channels only. It needs to perform more research in this field and open up new avenues for revenue generation. MU is required to clearly identify its existing products that are in the offer; only then would they be in a situation where they could employ different strategic models like Boston Matrix to have a better understanding of their business. This would allow the club to have sustainable growth and development.
Another key area of weakness that has crept up to within Manchester United is that the club is more concentrated towards earning profits because of their current success and the huge amount of earnings. It is now less focussed in football and more on profit-making motives. This can have a detrimental effect on their fans. Hence the club management should be aware of this situation and take pro-active steps regarding this issue. Malcolm Glazer took less than 3 years to have control over the ownership of Manchester United and ultimately succeeded to delist it from the London Stock Exchange (LSE). ...Download file to see next pagesRead More
Share:
Tags
Cite this document
(“Business strategy: Manchester United FC: continuing success but at Essay”, n.d.)
Business strategy: Manchester United FC: continuing success but at Essay. Retrieved from https://studentshare.org/business/1452582-business-strategy-manchester-united-fc-continuing

CHECK THESE SAMPLES OF Business Strategy of Manchester United

... and made me decide to continue a career in technology. 2. Please explain your principal reasons for wishing to join the Warwick MBA. Describe your career aspirations, the contribution you will make to the programme and, if you will be sponsored, the value you will add to your sponsoring organisation – 500 words I researched all of the universities in the United Kingdom (UK) and the Warwick MBA called my attention, since it is one of best reputed universities in Europe. This will give me an opportunity to introduce myself into business and understand the Financial Markets and Management. This will expand my horizons both in the theoretical (course content) setting and the praxis (networking). This will also enable me to obtain my degree...
6 Pages(1500 words)Essay

...Introduction Globalization, one of the most hotly debated issues means global capitalism to some while others consider it to be the continuation of modernism with the forces of wealth, progress, democracy and happiness at play (Kellner, 2002). Globalization is considered to be beneficial which promotes economic prosperity, cultural diversity and technological advancement. According to the critical social theory, technology and capital work together to create a new globalized and interconnected world. While each force of globalization is important, technological revolution has impacted the business models, value creation and differentiation (Spelman, 2010). The cloud computing technologies that have made the popular social networking...
7 Pages(1750 words)Coursework
sponsored ads
Save Your Time for More Important Things
Let us write or edit the case study on your topic "Business Strategy of Manchester United" with a personal 20% discount.
GRAB THE BEST PAPER

Let us find you another Case Study on topic Business Strategy of Manchester United for FREE!