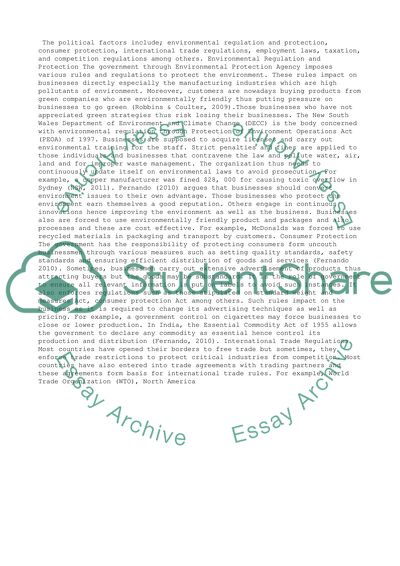 Download file to see previous pages The political factors include; environmental regulation and protection, consumer protection, international trade regulations, employment laws, taxation, and competition regulations among others. Environmental Regulation and Protection The government through Environmental Protection Agency imposes various rules and regulations to protect the environment. These rules impact on businesses directly especially the manufacturing industries which are high pollutants of environment. Moreover, customers are nowadays buying products from green companies who are environmentally friendly thus putting pressure on businesses to go green (Robbins & Coulter, 2009).Those businesses who have not appreciated green strategies thus risk losing their businesses. The New South Wales Department of Environment and Climate Change (DECC) is the body concerned with environmental regulation through Protection of Environment Operations Act (PEOA) of 1997. Businesses are supposed to acquire licenses and carry out environmental training for the staff. Strict penalties and fines are applied to those individuals and businesses that contravene the law and pollute water, air, land and for improper waste management. The organization thus needs to continuously update itself on environmental laws to avoid prosecution. For example, a copper manufacturer was fined $28, 000 for causing toxic overflow in Sydney (NSW, 2011). Fernando (2010) argues that businesses should convert environment issues to their own advantage. Those businesses who protect the environment earn themselves a good reputation. Others engage in continuous innovations hence improving the environment as well as the business. Businesses also are forced to use environmentally friendly product and packages and also processes and these are cost effective. For example, McDonalds was forced to use recycled materials in packaging and transport by customers. Consumer Protection The government has the responsibility of protecting consumers form uncouth businessmen through various measures such as setting quality standards, safety standards and ensuring efficient distribution of goods and services (Fernando 2010). Sometimes, businessmen carry out extensive advertisement of products thus attracting buyers but the goods may be substandard. It is the role of government to ensure all relevant information is put on labels to avoid such instances. It also enforces regulations such as those stipulated on standard weight and measures Act, consumer protection Act among others. Such rules impact on the business as it is required to change its advertising techniques as well as pricing. For example, a government control on cigarettes may force businesses to close or lower production. In India, the Essential Commodity Act of 1955 allows the government to declare any commodity as essential hence control its production and distribution (Fernando, 2010). International Trade Regulations Most countries have opened their borders to free trade but sometimes, they enforce trade restrictions to protect critical industries from competition. Most countries have also entered into trade agreements with trading partners and these agreements form basis for international trade rules. For example, World Trade Organization (WTO), North America ...Download file to see next pagesRead More
Share:
Tags
Cite this document
(“Environmental Regulation and Protection Essay Example | Topics and Well Written Essays - 1000 words”, n.d.)
Environmental Regulation and Protection Essay Example | Topics and Well Written Essays - 1000 words. Retrieved from https://studentshare.org/business/1436313-select-one-of-the-pest-political-economic-social
(Environmental Regulation and Protection Essay Example | Topics and Well Written Essays - 1000 Words)
Environmental Regulation and Protection Essay Example | Topics and Well Written Essays - 1000 Words. https://studentshare.org/business/1436313-select-one-of-the-pest-political-economic-social.
“Environmental Regulation and Protection Essay Example | Topics and Well Written Essays - 1000 Words”, n.d. https://studentshare.org/business/1436313-select-one-of-the-pest-political-economic-social.
Comments (0)
Click to create a comment or rate a document

CHECK THESE SAMPLES OF Environmental Regulation and Protection

On the other hand, the change in the forms of employment has led to a decrease in employees’ performance in the high percentage of organizations internationally. Towards this direction, McGovern et al. (2004, 225) stated that ‘the rapid growth in nonstandard forms of employment toward the end of the 20th century has fuelled claims about the spread of "bad jobs" within Anglo-American capitalism; research from the United States indicates that such jobs have more bad characteristics than do permanent jobs after controlling for workers’. In other words, the bad conditions in the workplace – lack of communication and cooperation among the employees - but also between the employees and the firm’s owners - l...
13 Pages(3250 words)Term Paper

In terms of the drawbacks, one of the main issues is the needed resources and expenses which continuously increase due to the i...
6 Pages(1500 words)Assignment
sponsored ads
Save Your Time for More Important Things
Let us write or edit the essay on your topic "Environmental Regulation and Protection" with a personal 20% discount.
GRAB THE BEST PAPER

Let us find you another Essay on topic Environmental Regulation and Protection for FREE!