Comments (0)
Add to wishlistDelete from wishlist
Cite this document
Summary
Running Head: Critical Skills Critical Skills Critical Skills Introduction The article, “How Leaders Create and Use Networks” by Ibarra and Hunter is a detailed analysis of how and why networking is important for leaders in a business organizational environment…
Download full paperFile format: .doc, available for editing
HIDE THIS PAPERGRAB THE BEST PAPER92.7% of users find it useful 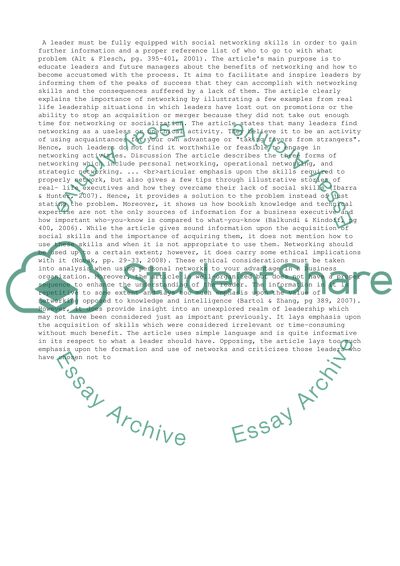 Download file to see previous pages A leader must be fully equipped with social networking skills in order to gain further information and a proper reference list of who to go to with what problem (Alt & Flesch, pg. 395-401, 2001). The article’s main purpose is to educate leaders and future managers about the benefits of networking and how to become accustomed with the process. It aims to facilitate and inspire leaders by informing them of the peaks of success that they can accomplish with networking skills and the consequences suffered by a lack of them. The article clearly explains the importance of networking by illustrating a few examples from real life leadership situations in which leaders have lost out on promotions or the ability to stop an acquisition or merger because they did not take out enough time for networking or socialization. The article states that many leaders find networking as a useless or unethical activity. They believe it to be an activity of using acquaintances for your own advantage or “taking favors from strangers”. Hence, such leaders do not find it worthwhile or feasible to engage in networking activities. Discussion The article describes the three forms of networking which include personal networking, operational networking, and strategic networking. ...
articular emphasis upon the skills required to properly network, but also gives a few tips through illustrative stories of real- life executives and how they overcame their lack of social skills (Ibarra & Hunter, 2007). Hence, it provides a solution to the problem instead of just stating the problem. Moreover, it shows us how bookish knowledge and technical expertise are not the only sources of information for a business executive and how important who-you-know is compared to what-you-know (Balkundi & Kindoff, pg 400, 2006). While the article gives sound information upon the acquisition of social skills and the importance of acquiring them, it does not mention how to use these skills and when it is not appropriate to use them. Networking should be used up to a certain extent; however, it does carry some ethical implications with it (Novak, pp. 29-33, 2008). These ethical considerations must be taken into analysis when using personal networks to your advantage in a business organization. Moreover, the article is well-organized but does not have a proper sequence to enhance the understanding of the reader. The information in it is repetitive to some extent and lays too much emphasis upon the value of networking opposed to knowledge and intelligence (Bartol & Zhang, pg 389, 2007). However, it does provide insight into an unexplored realm of leadership which may not have been considered just as important previously. It lays emphasis upon the acquisition of skills which were considered irrelevant or time-consuming without much benefit. The article uses simple language and is quite informative in its respect to what a leader should have. Opposing, the article lays too much emphasis upon the formation and use of networks and criticizes those leaders who have chosen not to ...Download file to see next pagesRead More
Share:
Tags
Cite this document
(“Networking in Business Organizations Essay Example | Topics and Well Written Essays - 1000 words”, n.d.)
Networking in Business Organizations Essay Example | Topics and Well Written Essays - 1000 words. Retrieved from https://studentshare.org/business/1434672-critical-skill

CHECK THESE SAMPLES OF Networking in Business Organizations

...Introduction Globalization, one of the most hotly debated issues means global capitalism to some while others consider it to be the continuation of modernism with the forces of wealth, progress, democracy and happiness at play (Kellner, 2002). Globalization is considered to be beneficial which promotes economic prosperity, cultural diversity and technological advancement. According to the critical social theory, technology and capital work together to create a new globalized and interconnected world. While each force of globalization is important, technological revolution has impacted the business models, value creation and differentiation (Spelman, 2010). The cloud computing technologies that have made the popular social networking...
7 Pages(1750 words)Coursework
sponsored ads
Save Your Time for More Important Things
Let us write or edit the essay on your topic "Networking in Business Organizations" with a personal 20% discount.
GRAB THE BEST PAPER

Let us find you another Essay on topic Networking in Business Organizations for FREE!