Comments (0)
Add to wishlistDelete from wishlist
Cite this document
Summary
The study "Tesco’s Interest in Indonesia - Unusual Way of Doing Things" argues that the business rules and laws in Indonesia could affect Tesco’s ways of business, this giant in the business industry must be detached from its nature of buying off small shops and having a dominant position. …
Download full paperFile format: .doc, available for editing
HIDE THIS PAPERGRAB THE BEST PAPER92.2% of users find it useful 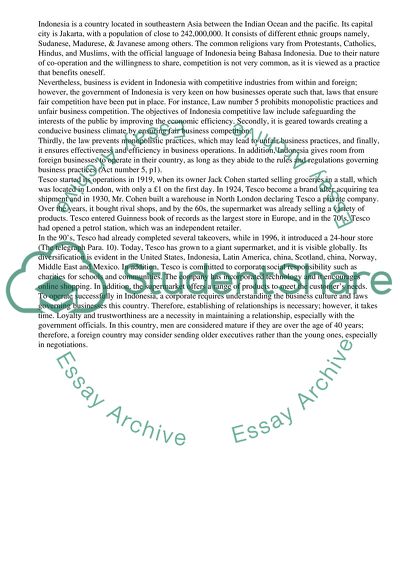 Download file to see previous pages Indonesia is a country located in southeastern Asia between the Indian Ocean and the pacific. Its capital city is Jakarta, with a population of close to 242,000,000. It consists of different ethnic groups namely, Sudanese, Madurese, & Javanese among others. The common religions vary from Protestants, Catholics, Hindus, and Muslims, with the official language of Indonesia being Bahasa Indonesia. Due to their nature of co-operation and the willingness to share, competition is not very common, as it is viewed as a practice that benefits oneself.
Nevertheless, business is evident in Indonesia with competitive industries from within and foreign; however, the government of Indonesia is very keen on how businesses operate such that, laws that ensure fair competition have been put in place. For instance, Law number 5 prohibits monopolistic practices and unfair business competition. The objectives of Indonesia competitive law include safeguarding the interests of the public by improving the economic efficiency. Secondly, it is geared towards creating a conducive business climate by ensuring fair business competition.
Thirdly, the law prevents monopolistic practices, which may lead to unfair business practices, and finally, it ensures effectiveness and efficiency in business operations. In addition, Indonesia gives room from foreign businesses to operate in their country, as long as they abide to the rules and regulations governing business practices (Act number 5, p1).
Tesco started its operations in 1919, when its owner Jack Cohen started selling groceries in a stall, which was located in London, with only a £1 on the first day. In 1924, Tesco become a brand after acquiring tea shipment and in 1930, Mr. Cohen built a warehouse in North London declaring Tesco a private company. Over the years, it bought rival shops, and by the 60s, the supermarket was already selling a variety of products. Tesco entered Guinness book of records as the largest store in Europe, and in the 70’s, Tesco had opened a petrol station, which was an independent retailer.
In the 90’s, Tesco had already completed several takeovers, while in 1996, it introduced a 24-hour store (The telegraph Para. 10). Today, Tesco has grown to a giant supermarket, and it is visible globally. Its diversification is evident in the United States, Indonesia, Latin America, china, Scotland, china, Norway, Middle East and Mexico. In addition, Tesco is committed to corporate social responsibility such as charities for schools and communities. The company has incorporated technology and it encourages online shopping. In addition, the supermarket offers a range of products to meet the customer’s needs.
To operate successfully in Indonesia, a corporate requires understanding the business culture and laws governing businesses this country. Therefore, establishing of relationships is necessary; however, it takes time. Loyalty and trustworthiness are a necessity in maintaining a relationship, especially with the government officials. In this country, men are considered mature if they are over the age of 40 years; therefore, a foreign country may consider sending older executives rather than the young ones, especially in negotiations. ...Download file to see next pagesRead More
Share:
Tags
Cite this document
(“Tesco in Indonesia Essay Example | Topics and Well Written Essays - 1500 words”, n.d.)
Tesco in Indonesia Essay Example | Topics and Well Written Essays - 1500 words. Retrieved from https://studentshare.org/business/1434027-tesco-in-indonesia

However, in the case of Re 139 High Street, Deptford2, it was established that there had been a mistake in the conveyancing transaction and that one annexe on the property actually did not belong to the registered owner, who was the legal owner of the land. The owner of the annexe then asked for the register to be amended and this was done accordingly, in recognition of his interest beca...
6 Pages(1500 words)Case Study

Indicatively, Ahiakport (2003, 42) noticed that “interest is compensation for the use of capital; not necessarily money”. Moreover, the above researcher mentioned that in general “quantity of money determines the supply of liquid resources, and hence the rate of interest, and in conjunction with other factors (particularly that of confidence) the inducement to invest” (Ahiakport, 2003, 55). In other words, interest rates are related to the capital both directly and indirectly. The direct relation refers to the increase of capital under the influence of specific interest rates, while the indirect relation can be assumed by the ‘attraction’ of foreign funds in a particular country due to high-inte...
14 Pages(3500 words)Term Paper

Shared knowledge is a highly systematic and structured knowledge produced by more than one individual7. Much of the shared knowledge is classifiable into diverse areas of knowledge like mathematics, natural sciences, history, philosophy, and others8. Even though shared knowledge relies on the contributions of individuals, it does not rely on the contributions of a particular person9. There are chances for other people to amend, check, and add individual contributions to the existing body of knowledge10. For example, the knowledge necessary for building a computer is a piece of shared knowledge. It is improbable that there is a person who possesses the knowledge for building a computer from scratch rather than assembling a computer...
8 Pages(2000 words)Assignment
sponsored ads
Save Your Time for More Important Things
Let us write or edit the case study on your topic "Tesco's Interest in Indonesia - Unusual Way of Doing Things" with a personal 20% discount.
GRAB THE BEST PAPER

Let us find you another Case Study on topic Tesco's Interest in Indonesia - Unusual Way of Doing Things for FREE!