Comments (0)
Add to wishlist Delete from wishlist
Cite this document
Summary
With the economic market decreasing, people have less and less spending money. This means that individuals are not purchasing items that are viewed as “extra,” and clothes, unless bought for a growing child, generally fit into this market…
Download full paper File format: .doc, available for editing
HIDE THIS PAPERGRAB THE BEST PAPER92.9% of users find it useful 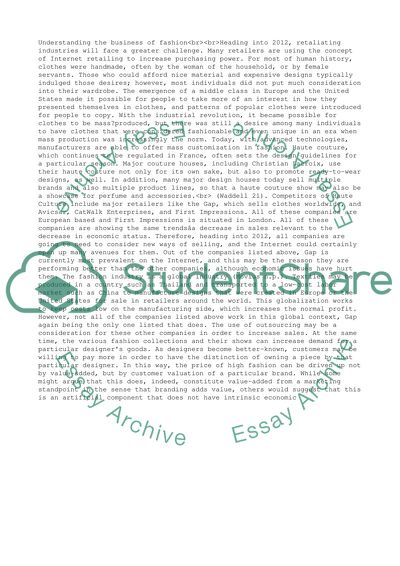 Extract of sample "Understanding the business of fashion"

Heading into 2012, retaliating industries will face a greater challenge. Many retailers are using the concept of Internet retailing to increase purchasing power. For most of human history, clothes were handmade, often by the woman of the household, or by female servants. Those who could afford nice material and expensive designs typically indulged those desires; however, most individuals did not put much consideration into their wardrobe. The emergence of a middle class in Europe and the United States made it possible for people to take more of an interest in how they presented themselves in clothes, and patterns of popular clothes were introduced for people to copy. With the industrial revolution, it became possible for clothes to be mass?produced, but there was still a desire among many individuals to have clothes that were considered fashionable and even unique in an era when mass production was increasingly the norm. Today, with advanced technologies, manufacturers are able to offer mass customization in fashion. Haute couture, which continues to be regulated in France, often sets the design guidelines for a particular season. Major couture houses, including Christian Lacroix, use their haute couture not only for its own sake, but also to promote ready-to-wear designs, as well. In addition, many major design houses today sell multiple brands and also multiple product lines, so that a haute couture show may also be a showcase for perfume and accessories.
(Waddell 21). Competitors of Haute Culture include major retailers like the Gap, which sells clothes worldwide, and Avicsar, CatWalk Enterprises, and First Impressions. All of these companies are European based and First Impressions is situated in London. All of these companies are showing the same trends—a decrease in sales relevant to the decrease in economic status. Therefore, heading into 2012, all companies are going to need to consider new ways of selling, and the Internet could certainly open up many avenues for them. Out of the companies listed above, Gap is currently most prevalent on the Internet, and this may be the reason they are performing better than the other companies, although economic issues have hurt them. The fashion industry is a global industry (Movius n.p.). Textiles may be produced in a country such as Thailand and transported to a low-cost labor market such as China to manufacture designs that were created in Europe or the United States for sale in retailers around the world. This globalization works to keep costs low on the manufacturing side, which increases the normal profit. However, not all of the companies listed above work in this global context, Gap again being the only one listed that does. The use of outsourcing may be a consideration for these other companies in order to increase sales. At the same time, the various fashion collections and their shows can increase demand for a particular designer's goods. As designers become better-known, customers may be willing to pay more in order to have the distinction of owning a piece by that particular designer. In this way, the price of high fashion can be driven up not by value-added, but by customer valuation of a particular brand. While some might argue that this does, indeed, constitute value-added from a marketing standpoint in the sense that branding adds value, others would suggest that this is an artificial component that does not have intrinsic economic ...Download file to see next pages Read More
Share:
Tags
Cite this document
(“Understanding the business of fashion Essay Example | Topics and Well Written Essays - 1250 words”, n.d.)
Retrieved from https://studentshare.org/business/1422015-understanding-the-business-of-fashion

CHECK THESE SAMPLES OF Understanding the business of fashion

...Introduction Globalization, one of the most hotly debated issues means global capitalism to some while others consider it to be the continuation of modernism with the forces of wealth, progress, democracy and happiness at play (Kellner, 2002). Globalization is considered to be beneficial which promotes economic prosperity, cultural diversity and technological advancement. According to the critical social theory, technology and capital work together to create a new globalized and interconnected world. While each force of globalization is important, technological revolution has impacted the business models, value creation and differentiation (Spelman, 2010). The cloud computing technologies that have made the popular social networking...
7 Pages (1750 words) Coursework
sponsored ads
Save Your Time for More Important Things
Let us write or edit the essay on your topic "Understanding the business of fashion" with a personal 20% discount.
GRAB THE BEST PAPER

Let us find you another Essay on topic Understanding the business of fashion for FREE!