Comments (0)
Add to wishlistDelete from wishlist
Cite this document
Summary
Berg and Holtbrugge, through a network analysis of global teams in the automotive and airlines industry, found that interaction of team members from different cultures does not impact the productivity and creativity of teams…
Download full paperFile format: .doc, available for editing
HIDE THIS PAPERGRAB THE BEST PAPER95.3% of users find it useful 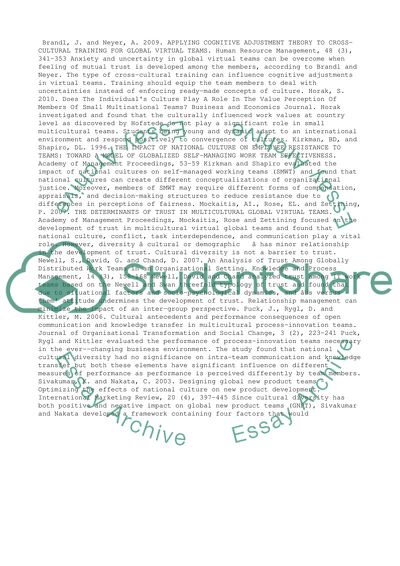 Download file to see previous pages Brandl, J. and Neyer, A. 2009. APPLYING COGNITIVE ADJUSTMENT THEORY TO CROSS-CULTURAL TRAINING FOR GLOBAL VIRTUAL TEAMS. Human Resource Management, 48 (3), 341-353 Anxiety and uncertainty in global virtual teams can be overcome when feeling of mutual trust is developed among the members, according to Brandl and Neyer. The type of cross-cultural training can influence cognitive adjustments in virtual teams. Training should equip the team members to deal with uncertainties instead of enforcing ready-made concepts of culture. Horak, S. 2010. Does The Individual’s Culture Play A Role In The Value Perception Of Members Of Small Multinational Teams? Business and Economics Journal. Horak investigated and found that the culturally influenced work values at country level as discovered by Hofstede do not play a significant role in small multicultural teams. Students being young and dynamic adapt to an international environment and respond positively to convergence of cultures. Kirkman, BD, and Shapiro, DL. 1996. THE IMPACT OF NATIONAL CULTURE ON EMPLOYEE RESISTANCE TO TEAMS: TOWARD A MODEL OF GLOBALIZED SELF-MANAGING WORK TEAM EFFECTIVENESS. Academy of Management Proceedings, 53-59 Kirkman and Shapiro evaluated the impact of national cultures on self-managed working teams (SMWT) and found that national cultures can create different conceptualizations of organizational justice. Moreover, members of SMWT may require different forms of compensation, appraisals, and decision-making structures to reduce resistance due to differences in perceptions of fairness. Mockaitis, AI., Rose, EL. and Zettining, P. 2007. THE DETERMINANTS OF TRUST IN MULTICULTURAL GLOBAL VIRTUAL TEAMS. Academy of Management Proceedings, Mockaitis, Rose and Zettining focused on the development of trust in multicultural virtual global teams and found that national culture, conflict, task interdependence, and communication play a vital role. However, diversity – cultural or demographic – has minor relationship in the development of trust. Cultural diversity is not a barrier to trust. Newell, S., David, G. and Chand, D. 2007. An Analysis of Trust Among Globally Distributed Work Teams in an Organizational Setting. Knowledge and Process Management, 14 (3), 158-168 Newell, David and Chand analyzed trust among IT work teams based on the Newell and Swan threefold typology of trust and found that due to situational factors and socio-psychological dynamics, and ‘Us versus them’ attitude undermines the development of trust. Relationship management can minimize the impact of an inter-group perspective. Puck, J., Rygl, D. and Kittler, M. 2006. Cultural antecedents and performance consequences of open communication and knowledge transfer in multicultural process-innovation teams. Journal of Organisational Transformation and Social Change, 3 (2), 223-241 Puck, Rygl and Kittler evaluated the performance of process-innovation teams necessary in the ever--changing business environment. The study found that national cultural diversity had no significance on intra-team communication and knowledge transfer but both these elements have significant influence on different measures of performance as performance is perceived differently by team members. Sivakumar, K. and Nakata, C. 2003. Designing global new product teams - Optimizing the effects of national culture on new product development. International Marketing Review, 20 (4), 397-445 Since cultural diversity has both positive and negative impact on global new product teams (GNPT), Sivakumar and Nakata developed a framework containing four factors that would ...Download file to see next pagesRead More
Share:
Tags
Cite this document
(“Cross Cultural Communication Essay Example | Topics and Well Written Essays - 2000 words”, n.d.)
Retrieved from https://studentshare.org/business/1402642-cross-cultural-communication
(Cross Cultural Communication Essay Example | Topics and Well Written Essays - 2000 Words)
https://studentshare.org/business/1402642-cross-cultural-communication.
“Cross Cultural Communication Essay Example | Topics and Well Written Essays - 2000 Words”, n.d. https://studentshare.org/business/1402642-cross-cultural-communication.
Comments (0)
Click to create a comment or rate a document

Communication is part of everyday life. It is not limited to adults or learned individuals. Babies communicate with their mothers as they cry when they are hungry, the mute use sign language to express what they want to say, while the mentally disabled laugh when they are happy or excited. The forms of communication people use may vary but common elements are usually present. These include the message and the communicators or the participants who play the role of either the sender or receiver of the message. In the communication situation, I had with my friend, these common features were present along with others namely, feedback, noise, context, and mutual agreement/negotiation. These elements affected the outcome of the conversa...
12 Pages(3000 words)Case Study
sponsored ads
Save Your Time for More Important Things
Let us write or edit the essay on your topic "Cross Cultural Communication" with a personal 20% discount.
GRAB THE BEST PAPER

Let us find you another Essay on topic Cross Cultural Communication for FREE!