Comments (0)
Add to wishlistDelete from wishlist
Cite this document
Summary
This paper will seek to address why international business is becoming more important and which world regions have been opening for international business as well as its impacts. This paper will analyze all these details using Haier group of companies as illustration mechanism…
Download full paperFile format: .doc, available for editing
HIDE THIS PAPERGRAB THE BEST PAPER98.8% of users find it useful 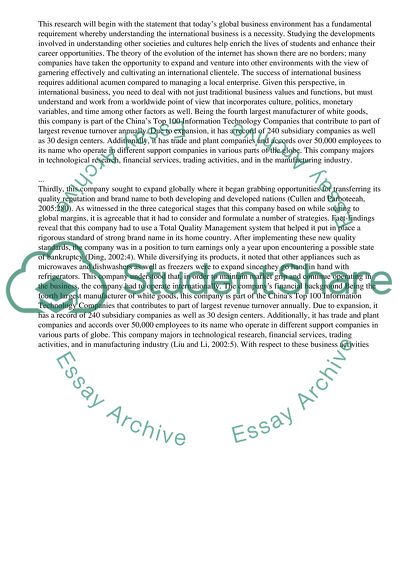 CHECK THESE SAMPLES OF International Dimension of Business

As a matter of fact, Hoffman’s statement that “international affairs is the nemesis of liberalism” has a grain of truth in it and this is especially so after the 9/11 incident.
There are two schools of thought or perspectives that are used to view international affairs: liberalism and realism. The study of these two perspectives is significant to the idea posed by Stanley Hoffman because they determine the reasons why international affairs, according to him, does not only see eye-to-eye with liberalism but seems to stand on the opposing side of it.
Liberalism can be defined as having four elements: citizens; the legislature; property rights, and; a market-driven economy (Dunne 186). Realism, on the othe...
6 Pages(1500 words)Assignment
sponsored ads
Save Your Time for More Important Things
Let us write or edit the essay on your topic "International Dimension of Business" with a personal 20% discount.
GRAB THE BEST PAPER

Let us find you another Essay on topic International Dimension of Business for FREE!