Comments (0)
Add to wishlist Delete from wishlist
Cite this document
Summary
The main purpose of this following paper is to investigate and present the changing demography of the developing world, and critically analyse its impact on global and regional economies as well as business trading opportunities in the future. …
Download full paper File format: .doc, available for editing
HIDE THIS PAPERGRAB THE BEST PAPER95.9% of users find it useful 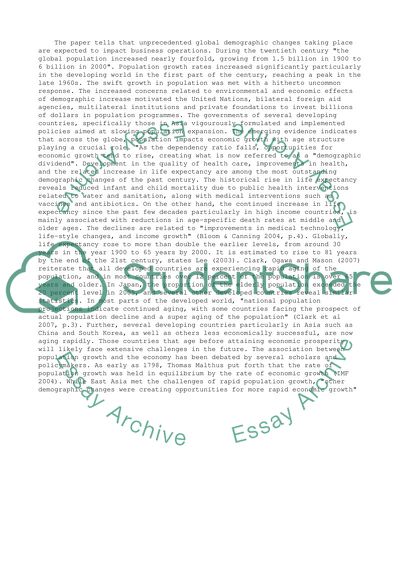 Download file to see previous pages The paper tells that unprecedented global demographic changes taking place are expected to impact business operations. During the twentieth century “the global population increased nearly fourfold, growing from 1.5 billion in 1900 to 6 billion in 2000”. Population growth rates increased significantly particularly in the developing world in the first part of the century, reaching a peak in the late 1960s. The swift growth in population was met with a hitherto uncommon response. The increased concerns related to environmental and economic effects of demographic increase motivated the United Nations, bilateral foreign aid agencies, multilateral institutions and private foundations to invest billions of dollars in population programmes. The governments of several developing countries, specifically those in Asia vigourously formulated and implemented policies aimed at slowing population expansion. The emerging evidence indicates that across the globe, population impacts economic growth with age structure playing a crucial role. “As the dependency ratio falls, opportunities for economic growth tend to rise, creating what is now referred to as a “demographic dividend”. Development in the quality of health care, improvements in health, and the related increase in life expectancy are among the most outstanding demographic changes of the past century. The historical rise in life expectancy reveals reduced infant and child mortality due to public health interventions related to water and sanitation, along with medical interventions such as vaccines and antibiotics. On the other hand, the continued increase in life expectancy since the past few decades particularly in high income countries, is mainly associated with reductions in age-specific death rates at middle and older ages. The declines are related to “improvements in medical technology, life-style changes, and income growth” (Bloom & Canning 2004, p.4). Globally, life expectancy rose to more than double the earlier levels, from around 30 years in the year 1900 to 65 years by 2000. It is estimated to rise to 81 years by the end of the 21st century, states Lee (2003). Clark, Ogawa and Mason (2007) reiterate that all developed countries are experiencing rapid aging of the population, and in most countries over 12 percent of the population is over 65 years and older. In Japan, the proportion of the elderly population exceeded the 20 percent level in 2005, and several other developed countries reveal similar statistics. In most parts of the developed world, “national population projections indicate continued aging, with some countries facing the prospect of actual population decline and a super aging of the population” (Clark et al 2007, p.3). Further, several developing countries particularly in Asia such as China and South Korea, as well as others less economically successful, are now aging rapidly. Those countries that age before attaining economic prosperity will likely face extensive challenges in the future. The association between population growth and the economy has been debated by several scholars and policymakers. As early as 1798, Thomas Malthus put forth that the rate of population growth was held in equilibrium by the rate of economic growth (IMF 2004). While East Asia met the challenges of rapid population growth, “other demographic changes were creating opportunities for more rapid economic growth” ...Download file to see next pages Read More
Share:
Tags
Cite this document
(“The Impact Of World Demographic Change On The Future Of Business Essay”, n.d.)
Retrieved from https://studentshare.org/business/1395823-essay-contemporary-management-issues

(The Impact Of World Demographic Change On The Future Of Business Essay)
https://studentshare.org/business/1395823-essay-contemporary-management-issues.

“The Impact Of World Demographic Change On The Future Of Business Essay”, n.d. https://studentshare.org/business/1395823-essay-contemporary-management-issues.
Comments (0)
Click to create a comment or rate a document

On the other hand, these globalization standards are opposed by some critics and argue that globalization does not have to be a requirement for putting up a business in other countries, thus it is just a choice for entering a foreign market. Accordingly, standardization is applicable specifically to high-end markets and with accord to the market segmentation such as the trends that the young people patronize (Mullman, 2006) Regardless of the idea that globalization is mostly based on how the company standardizes the products, the home country still holds the profitability of the business as the economy affects how the foreign investors and other national sources back up the business (Stiglitz, 2006).
Making the world flat mak...
9 Pages (2250 words) Assignment
sponsored ads
Save Your Time for More Important Things
Let us write or edit the essay on your topic "The Impact Of World Demographic Change On The Future Of Business Operations And Trading Opportunities" with a personal 20% discount.
GRAB THE BEST PAPER

Let us find you another Essay on topic The Impact Of World Demographic Change On The Future Of Business Operations And Trading Opportunities for FREE!