Comments (0)
Add to wishlist Delete from wishlist
Cite this document
Summary
This paper analyzes the effects the Euro's monetary power/exchange rate on the Airbus company and the effects of the Dollar's monetary power/the exchange rate on the Boeing company. The paper compares the efficiency and the performances of the two firms, particularly in the European market…
Download full paper File format: .doc, available for editing
HIDE THIS PAPERGRAB THE BEST PAPER98.3% of users find it useful 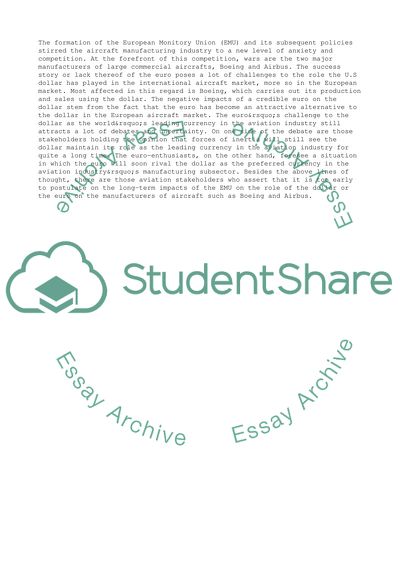 Extract of sample "Managing Business in Europe - Airbus versus Boeing"

Download file to see previous pages The formation of the European Monitory Union (EMU) and its subsequent policies stirred the aircraft manufacturing industry to a new level of anxiety and competition. At the forefront of this competition, wars are the two major manufacturers of large commercial aircrafts, Boeing and Airbus. The success story or lack thereof of the euro poses a lot of challenges to the role the U.S dollar has played in the international aircraft market, more so in the European market. Most affected in this regard is Boeing, which carries out its production and sales using the dollar. The negative impacts of a credible euro on the dollar stem from the fact that the euro has become an attractive alternative to the dollar in the European aircraft market. The euro’s challenge to the dollar as the world’s leading currency in the aviation industry still attracts a lot of debates and uncertainty. On one side of the debate are those stakeholders holding the opinion that forces of inertia will still see the dollar maintain its role as the leading currency in the aviation industry for quite a long time. The euro-enthusiasts, on the other hand, foresee a situation in which the euro will soon rival the dollar as the preferred currency in the aviation industry’s manufacturing subsector. Besides the above lines of thought, there are those aviation stakeholders who assert that it is too early to postulate on the long-term impacts of the EMU on the role of the dollar or the euro on the manufacturers of aircraft such as Boeing and Airbus. ...Download file to see next pages Read More
Share:
Tags
Cite this document
(“Managing Business in Europe - Airbus versus Boeing Research Paper”, n.d.)
Retrieved de https://studentshare.org/business/1392689-managing-business-in-europe-airbus-vs-boeing

CHECK THESE SAMPLES OF Managing Business in Europe - Airbus versus Boeing

On the other hand, these globalization standards are opposed by some critics and argue that globalization does not have to be a requirement for putting up a business in other countries, thus it is just a choice for entering a foreign market. Accordingly, standardization is applicable specifically to high-end markets and with accord to the market segmentation such as the trends that the young people patronize (Mullman, 2006) Regardless of the idea that globalization is mostly based on how the company standardizes the products, the home country still holds the profitability of the business as the economy affects how the foreign investors and other national sources back up the business (Stiglitz, 2006).
Making the world flat mak...
9 Pages (2250 words) Assignment
sponsored ads
Save Your Time for More Important Things
Let us write or edit the research paper on your topic "Managing Business in Europe - Airbus versus Boeing" with a personal 20% discount.
GRAB THE BEST PAPER

Let us find you another Research Paper on topic Managing Business in Europe - Airbus versus Boeing for FREE!