Comments (0)
Add to wishlistDelete from wishlist
Cite this document
Summary
Before Jackie goes into business, she must already consider the form of business that she must form to prevent complications later on as well as establish continuity. Thus, she must take into consideration the various forms of business organizations and pick one that will allow her to operate her business successfully…
Download full paperFile format: .doc, available for editing
HIDE THIS PAPERGRAB THE BEST PAPER91% of users find it useful 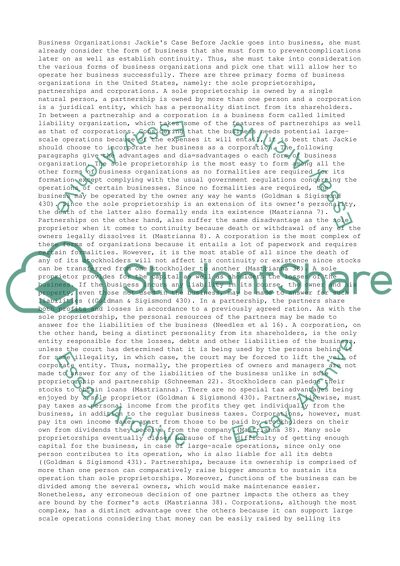 Business Organizations: Jackie’s Case Before Jackie goes into business, she must already consider the form of business that she must form to preventcomplications later on as well as establish continuity. Thus, she must take into consideration the various forms of business organizations and pick one that will allow her to operate her business successfully. There are three primary forms of business organizations in the United States, namely: the sole proprietorships, partnerships and corporations. A sole proprietorship is owned by a single natural person, a partnership is owned by more than one person and a corporation is a juridical entity, which has a personality distinct from its shareholders. In between a partnership and a corporation is a business form called limited liability organization, which takes some of the features of partnerships as well as that of corporations. Considering that the business needs potential large-scale operations because of the expenses it will entail, it is best that Jackie should choose to incorporate her business as a corporation. The following paragraphs give the advantages and dia=sadvantages o each form of business organization. The sole proprietorship is the most easy to form among all the other forms of business organizations as no formalities are required for its formation except complying with the usual government regulations concerning the operations of certain businesses. Since no formalities are required, the business may be operated by the owner any way he wants (Goldman & Sigismond 430). Since the sole proprietorship is an extension of its owner’s personality, the death of the latter also formally ends its existence (Mastrianna 7). Partnerships on the other hand, also suffer the same disadvantage as the sole proprietor when it comes to continuity because death or withdrawal of any of the owners legally dissolves it (Mastrianna 8). A corporation is the most complex of these forms of organizations because it entails a lot of paperwork and requires certain formalities. However, it is the most stable of all since the death of any of its stockholders will not affect its continuity or existence since stocks can be transferred from one stockholder to another (Mastrianna 38). A sole proprietor provides for the capital as well as shoulders the losses of the business. If the business incurs any liability in its course, the owner and his property, even those not used in the business, may be made to answer for such liabilities ((Goldman & Sigismond 430). In a partnership, the partners share both profits and losses in accordance to a previously agreed ration. As with the sole proprietorship, the personal resources of the partners may be made to answer for the liabilities of the business (Needles et al 16). A corporation, on the other hand, being a distinct personality from its shareholders, is the only entity responsible for the losses, debts and other liabilities of the business, unless the court has determined that it is being used by the persons behind it for some illegality, in which case, the court may be forced to lift the veil of corporate entity. Thus, normally, the properties of owners and managers are not made to answer for any of the liabilities of the business unlike in sole proprietorship and partnership (Schneeman 22). Stockholders can pledge their stocks to obtain loans (Mastrianna). There are no special tax advantages being enjoyed by a sole proprietor (Goldman & Sigismond 430). Partners, likewise, must pay taxes as personal income from the profits they get individually from the business, in addition to the regular business taxes. Corporations, however, must pay its own income taxes apart from those to be paid by stockholders on their own from dividends they receive from the company.(Mastrianna 38). Many sole proprietorships eventually closes because of the difficulty of getting enough capital for the business, in case of large-scale operations, since only one person contributes to its operation, who is also liable for all its debts ((Goldman & Sigismond 431). Partnerships, because its ownership is comprised of more than one person can comparatively raise bigger amounts to sustain its operation than sole proprietorships. Moreover, functions of the business can be divided among the several owners, which would make maintenance easier. Nonetheless, any erroneous decision of one partner impacts the others as they are bound by the former’s acts (Mastrianna 38). Corporations, although the most complex, has a distinct advantage over the others because it can support large scale operations considering that money can be easily raised by selling its stocks (Mastrianna 28). Works Cited Goldman, Arnold and William Sigismond. Business Law: Principles and Practices (8th Ed.). Cengage Learning, 2010. Needles, Belverd and Marian Powers, Susan Crosson. Principles of Accounting (11th Ed.). Cengage Learning, 2010. Mastrianna, Frank. Basic Economics (15th Ed.). Cengage Learning, 2009. Read More
Share:
Tags
Cite this document
(“Business Organizations: Jackie`s Case Essay Example | Topics and Well Written Essays - 750 words”, n.d.)
Retrieved de https://studentshare.org/business/1390943-essay
(Business Organizations: Jackie`s Case Essay Example | Topics and Well Written Essays - 750 Words)
https://studentshare.org/business/1390943-essay.
“Business Organizations: Jackie`s Case Essay Example | Topics and Well Written Essays - 750 Words”, n.d. https://studentshare.org/business/1390943-essay.
Comments (0)
Click to create a comment or rate a document

On the other hand, these globalization standards are opposed by some critics and argue that globalization does not have to be a requirement for putting up a business in other countries, thus it is just a choice for entering a foreign market. Accordingly, standardization is applicable specifically to high-end markets and with accord to the market segmentation such as the trends that the young people patronize (Mullman, 2006) Regardless of the idea that globalization is mostly based on how the company standardizes the products, the home country still holds the profitability of the business as the economy affects how the foreign investors and other national sources back up the business (Stiglitz, 2006).
Making the world flat mak...
9 Pages(2250 words)Assignment
sponsored ads
Save Your Time for More Important Things
Let us write or edit the essay on your topic "Business Organizations: Jackie`s Case" with a personal 20% discount.
GRAB THE BEST PAPER

Let us find you another Essay on topic Business Organizations: Jackie`s Case for FREE!