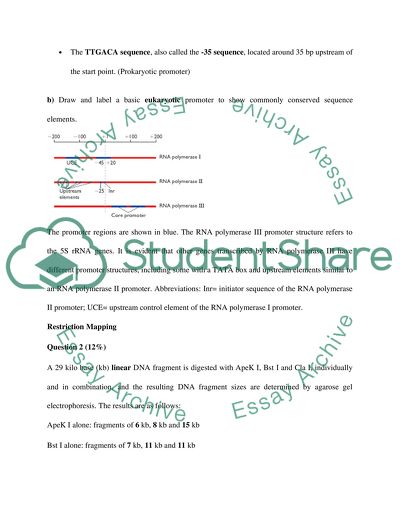 Download file to see previous pages Dpn I and Fse I together: fragments of 0.5 kb, 1.1 kb, 1.6 kb and 2.3 kb
Dpn I, Eag I and Fse I together: fragments of 0.3 kb, 0.5 kb, 0.6 kb, 1.0 kb, 1.1 kb and 2.0
kb
a) How many restriction sites are there for each enzyme What, if any, are the unique restriction sites on this plasmid
Ans. Dpn I = 3, Eag I = 2, Fse I = No RS. There are unique restriction sites for Fse I, this restriction enzyme works in conjunction with the Dpn I and Eag I.
b) Construct a restriction map of the plasmid and draw it below.
Cloning Strategies
Question 4 (28%)
Describe outline cloning strategies, including vector types (individual vectors need not be specified) and methods used at each stage, for the following scenarios:
Worked example
You wish to isolate the coding sequence of a human liver enzyme. You have purified the corresponding bovine enzyme and have raised a polyclonal antibody against it.
- Make a cDNA library from human liver tissue - this will be enriched for the
genes for liver enzymes.
- Create the library in an expression vector with a strong promoter so the genes
are expressed in the host.
- Screen the induced expression library for the presence of the desired liver
enzyme using the bovine polyclonal antibody. The antibody will bind to the
colonies which produce the protein they recognise. Although the match may
not be exact there should be enough conserved homology to ensure
recognition.
- Positive colonies will be identified by visualising the label on the bound
antibody/secondary antibody in the colony hybridisation.
a) You have a cDNA clone containing the 900 bp coding sequence of a cell surface
protein from pygmy goat monocytes. How can you use this to find the
homologous cDNA from the merino sheep
b) Having...
The results are as follows:
step. f1 IG SEQUENCE: to make single stranded DNA for sequencing UNIVERSAL PRIMER SEQUENCE: for primer to anneal to, to initiate sequencing SELECTABLE MARKER (eg lacZ'): to allow selection of clones containing the insert MCS POLYLINKER: insert fragment of DNA here 3.0 kb
You must describe the function of the essential features of each plasmid and give some indication of the plasmid size. For expression vectors you must bear in mind the host cells in which the coding sequence will be expressed.
a) Nonsense: The nonsense-mediated mRNA decay pathway degrades mRNAs transcribed from genes in which an amino-acid codon has changed to a nonsense codon; this prevents the translation of such mRNAs into truncated, and potentially harmful, proteins.
c) Splicing: A stage in the processing of mRNA, occurring only in eukaryotic cells, in which intervening sequences (introns) are removed from the primary RNA transcript (hnRNA) and the codig exons are joined together to form the mature mRNA molecule. url:www.geneontology.org .
d) Promoter: A nucleotide sequence of DNA to which RNA polymerase binds and initiates transcription. It usually lies upstream of (5' to) a coding sequence. A promoter sequence aligns the RNA polymerase so that transcription will initiate at a specific site.
e) Reading Frame: A series of triple ...Download file to see next pagesRead More
Share:
Tags
Cite this document
(“Molecular Biology Lab Report Example | Topics and Well Written Essays - 1750 words”, n.d.)
Retrieved from https://studentshare.org/biology/1531386-molecular-biology

CHECK THESE SAMPLES OF Molecular Biology

...Introduction Everyone is familiar with eukaryotes primarily because most of the living and visible organisms like plants, animals and human beings are eukaryotes. While a huge diversity in the living forms of eukaryotes can be seen by the naked eyes, there are millions of eukaryotes species that exist on earth but are not visible to the ordinary eyes. Eukaryotes can be defined as organisms whose cells are structurally and functionally complex, bound within a membrane and contain a nucleus. The various parts of eukaryote cells carry out specialized reactions and functions. Eukaryotes vary from single cell amoeba to multi-cellular creature like human-being and dinosaur, which is now extinct. Body The eukaryote cells... Everyone is familiar...
3 Pages(750 words)Essay

...Biology 09 October Integration of Fossil and Molecular Data Integrating fossil and molecular data is just like opening a door to endless amazing discoveries on how the body of living creatures was formed. It has been established that molecular data along with morphological data played important roles in giving vivid details on the history of evolution. While it is true that molecular data or DNA data results to documented sequence of various events in the evolutionary development of specific specie, it cannot achieve any success in deciphering the evolution of species that lived hundreds or millions of years ago through fossils. It is in this regard that...
2 Pages(500 words)Essay

...﻿Molecular Biology and Molecular Diagnostics Introduction The popularity of Health tips magazines is on the rise. The magazines are increasingly being appreciated because of their role of providing useful health information on various topics (Allison, 2009, p. 45). What is more, the magazines offer information on the most recent advances in molecular biology research, the most effective health practices, and beauty tips for (aging) women. Health tips magazines also address emotional, mental, fitness-related, dietary, and physical environment issues. The main topics discussed in health magazines include disease management, fitness, beauty, diet, well...
2 Pages(500 words)Essay

...LYMPHOMA DIAGNOSTICS TECHNIQUES al Affiliation) Problem of Interest Lymphoma diagnostics. Many people die of the disease called non-Hodgkin’s lymphomas. The most common type of non-Hodgkin’s lymphomas (NHL), out of the many subtypes, is the diffuse large B-cell lymphoma (DLBCL). This death rate can be reduced by employing various methods stated below. Why the Problem Exists It is very difficult to categorize prognostic ally on morphological or clinical grounds the condition of NHL subtype DLBCL. With the complexity of the classification system of the NHL, it is known that the NHL categories have multiple disease subtypes each with separate molecular defects and clinical outcomes. An example is where, 35-40% of patients...
2 Pages(500 words)Essay

...APPLIED MOLECULAR BIOLOGY: OUTLINE MODULE PROJECT PROJECT USING TILING ARRAYS TO DIAGNOSE DRUG RESISTANCE IN CLINICAL ISOLATES OF GONORRHEA SUMMARY OF PROJECT One of the major global burdens of sexually transmitted diseases is gonorrhea, second only to Chlamydia.106 million gonococcal infections have been reported annually, making it a disease that demands immediate attention and treatment. However, during the recent years frequent incidences of treatment failures have been reported for this disease, causing rising concern to health care providers and researchers (Blomquist, et al., 2014). The causal organism Neisseria gonorrhoeae has been reported to exhibit resistance to first line therapeutic drugs and has even shown ability... et al.,...
12 Pages(3000 words)Essay
sponsored ads
Save Your Time for More Important Things
Let us write or edit the lab report on your topic "Molecular Biology" with a personal 20% discount.
GRAB THE BEST PAPER

Let us find you another Lab Report on topic Molecular Biology for FREE!