Comments (0)
Add to wishlistDelete from wishlist
Cite this document
Summary
Demonstrate the adaptability of the cardiovascular system to autoregulate to two different, stressful conditions (1. Max test 2. Steady state exercise at 65% maximum oxygen level).The cardiovascular system has the capabilities to adapt to a number of external factors. …
Download full paperFile format: .doc, available for editing
HIDE THIS PAPERGRAB THE BEST PAPER96.9% of users find it useful 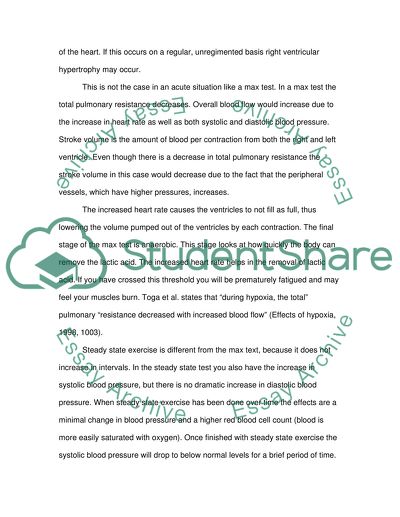 Download file to see previous pages Demonstrate the adaptability of the cardiovascular system to autoregulate to two different, stressful conditions (1. Max test 2. Steady state exercise at 65% maximum oxygen level). Explain in detail how the different cardiovascular components such as heart rate, systolic blood pressure, diastolic blood pressure, total pulmonary resistance, stroke volume and blood flow, respond to these stressful conditions. Explain in detail the physiological mechanisms responsible for the changes observed.The cardiovascular system has the capabilities to adapt to a number of external factors. An example of the cardiovascular system’s ability to adapt is seen in response to a max test. This test measures the volume of oxygen in the blood that the body uses in one minute of maximal exercise. A stationary exercise machine is used when administering the test. The first-minute interval is done at a very easy level. As each minute passes the levels become increasingly more difficult until you reach a levels when you can no longer
continue. The max test requires you to wear a mask and to breathe through your mouth. The mask is connected to an analyzer that looks at the levels of carbon
dioxide and oxygen in the exhaled gas. You are also hooked up to a heart monitor. Using the information gathered you could figure out your cardiovascular
fitness and define your maximum aerobic power.The max test causes an increase in heart rate, because there is an increased need by your muscles for oxygenated blood

...
stroke volume in this case would decrease due to the fact that the peripheral
vessels, which have higher pressures, increases.
The increased heart rate causes the ventricles to not fill as full, thus
lowering the volume pumped out of the ventricles by each contraction. The final
stage of the max test is anaerobic. This stage looks at how quickly the body can
remove the lactic acid. The increased heart rate helps in the removal of lactic
acid. If you have crossed this threshold you will be prematurely fatigued and may
feel your muscles burn. Toga et al. states that "during hypoxia, the total"
pulmonary "resistance decreased with increased blood flow" (Effects of hypoxia,
1998, 1003).
Steady state exercise is different from the max text, because it does not
increase in intervals. In the steady state test you also have the increase in
systolic blood pressure, but there is no dramatic increase in diastolic blood
pressure. When steady state exercise has been done over time the effects are a
minimal change in blood pressure and a higher red blood cell count (blood is
more easily saturated with oxygen). Once finished with steady state exercise the
systolic blood pressure will drop to below normal levels for a brief period of time.
Steady state exercise, when done on a regular basis, will decrease heart
rate. A decrease in heart rate will allow the ventricles more time to fill. . Stroke
volume is the volume of blood in the ventricles during diastole minus the volume
of blood in the ventricles during systole of the same heartbeat. If the heart rate is
slower it allows for more filling of the ventricles hence a larger stroke volume.
There are other factors that also contribute to these different
cardiovascular components. Khaksari et al. ...Download file to see next pagesRead More
Share:
Tags
Cite this document
(“Cardiovascular system Essay Example | Topics and Well Written Essays - 2500 words”, n.d.)
Retrieved from https://studentshare.org/biology/1527440-cardiovascular-system

CHECK THESE SAMPLES OF Cardiovascular system

...﻿Altered Hematology and Cardiovascular System Case Study Ms. A. is an apparently healthy 26-year-old white woman. Since the beginning of the current golf season, Ms. A has noted increased shortness of breath and low levels of energy and enthusiasm. These symptoms seem worse during her menses. Today, while playing in a golf tournament at a high, mountainous course, she became light-headed and was taken by her golfing partner to the emergency clinic. The attending physician’s notes indicated a temp of 98 degrees F, an elevated heart rate and respiratory rate, and low blood pressure. Ms. A states, “Menorrhagia and dysmenorrheal have been a problem for 10-12 years, and I take 1,000 mg of aspirin every 3 to 4 hours for 6 days during... , weakness,...
6 Pages(1500 words)Case Study

Cardiovascular system in our body

... Cardiovascular system in our body Introduction Writings on the circulatory system can be traced back to the 16th century BCE, to records such as a primeval Egyptian medical papyrus, which recorded medication and prescriptions, which were spiritual and physical. The primordial Egyptians believed that air entered the body through the mouth before proceeding to the lungs and the heart. Cardiovascular system, as the name shows, is a combination of two words. The word cardio came from the heart and vascular from the vessels. Therefore, the system formed by the heart and vessels in our body is called the cardiovascular system. The system is also referred to as the circulatory system. For several years, people have been enthralled... by the...
4 Pages(1000 words)Essay

Autonomic Regulation of the Cardiovascular System

Discussion - Pathology of the Cardiovascular System

...Pathology of the Cardiovascular System Arteriosclerosis obliterans, or simply peripheral artery disease (PAD), is a cardiovascular system disorder that affects the blood vessels and circulation in the legs and feet of an individual causing tissue and nerve damage (Jain 397). The arteries narrow and blood flow become extremely difficult as plague (fatty materials) builds up, thus the blood supply to the lower extremities is limited. Consequently, PAD causes the muscles in the legs and feet region to work twice the normal rate regardless of whether the person is resting or at motion. The disorder has a high susceptibility to individuals with high cholesterol, stroke, and...
1 Pages(250 words)Essay

Potasium regulation of the Heart and cardiovascular system

...Potassium regulation of the heart and cardiovascular system. The cardiovascular system of the human body consists of the heart, blood vessels e.g. arteries, veins, arterioles, capillaries, and blood which flows in these vessels. The human heart is located in the middle of the thoracic cavity and is oriented in a diagonal plane such that its apex leans slightly towards the left side. It is covered in a fibrous sac known as the pericardium, except in areas where the great vessels attach to it. Within the pericardium is a small quantity of fluid which lubricates the heart surface and decreases friction between the pericardium and heart during contraction and relaxation. The...
5 Pages(1250 words)Term Paper

...Case Studies: Altered Hematology & Cardiovascular System Altered Hematology and Cardiovascular System Case Study Ms. A. is an apparently healthy 26-year-old white woman. Since the beginning of the current golf season, Ms. A has noted increased shortness of breath and low levels of energy and enthusiasm. These symptoms seem worse during her menses. Today, while playing in a golf tournament at a high, mountainous course, she became light-headed and was taken by her golfing partner to the emergency clinic. The attending physician’s notes indicated a temp of 98 degrees F, an elevated heart rate and respiratory rate, and low blood pressure. Ms. A states, “Menorrhagia and...
4 Pages(1000 words)Case Study

The Cardiovascular System: Blood Vessels and Circulation/ and cause of tingling or numb of a body part after a nap ect

...Cardiovascular System Introduction The cardiovascular system describes the circulatory components of the body of animals. It iscomposed of blood, blood vessels and the lymphatic system. This paper primarily focuses on describing the cardiovascular system and identifying the causes numbness after taking a nap. 2. Components of Circulatory System The circulatory system is made up of blood that constitutes the white blood cells or leucocytes, the red blood cells or erythrocytes, plasma and platelets. All of these components have a specific function in the role that blood plays. Blood acts...
1 Pages(250 words)Essay

...Assessing the Cardiovascular System Most individuals know about the strong connection between disease prevention and a healthy diet (Lee and Nieman, 259). However, did you realize that what you consume -- or do not consume – might lower or avert high blood pressure? Weight loss, if you are obese or overweight, is a safe, as well as effective way of lowering blood pressure, as well. By accepting a few simple dietary behaviors, including watching portion sizes and counting calories to boost weight loss, a person might be capable of lowering their blood pressure, which is a confirmed risk for heart disease (Ross 98). Losing weight might also aid in reducing medications required to regulate high blood...
1 Pages(250 words)Assignment

...Physiology and metabolism, cardiovascular system, MacMan computer simuklation Physiology and Metabolism Macman – Computer Simulation Report Institution Introduction Physiological homeostasis in the cardiovascular system is maintained depending on baroreceptor and chemoreceptor reflexes. Baroreceptor reflexes respond to changes in blood pressure and chemoreceptor reflexes respond to changes in pH, which are usually caused by an increase or decrease in blood CO2 (Scanlon & Sanders, 2011). (will insert diagrams here) In this computer simulation, changes of the internal and external environments such as arterial resistance, venous resistance, cardiac pump resistance, and...
19 Pages(4750 words)Essay

...The Cardiovascular System The Cardiovascular System The human heart is a cone-shaped organ with the size of a clenched fistand is located in the chest area. The heart is found between the two human lungs with its apex facing downwards. The heart is sensitive and is a muscular organ with four chambers. The human heart is alienated into left and right sections by an interventricular septum. Both left and rights parts of the heart are further subdivided into lower and upper compartments called ventricles and atria, respectively. The heart is divided into two halves to enhance the two circulatory systems where the left side of the heart pumps blood to other...
6 Pages(1500 words)Assignment
sponsored ads
Save Your Time for More Important Things
Let us write or edit the essay on your topic "Cardiovascular system" with a personal 20% discount.
GRAB THE BEST PAPER

Let us find you another Essay on topic Cardiovascular system for FREE!