Comments (0)
Add to wishlistDelete from wishlist
Cite this document
Summary
According to Davis (2007), Buddhism traces its origin almost 2500 years ago from Siddhartha Gautama popularly known as Buddha, which means the awakened one in Sanskrit. For Buddhists, the teachings of Buddha are Dharma. According to Davis (2007), Dharma “is the spiritual path,…
Download full paperFile format: .doc, available for editing
HIDE THIS PAPERGRAB THE BEST PAPER94.2% of users find it useful 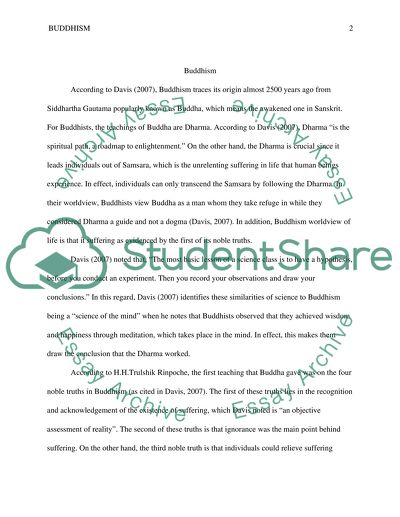 Buddhism Buddhism According to Davis (2007), Buddhism traces its origin almost 2500 years ago from Siddhartha Gautama popularly known as Buddha, which means the awakened one in Sanskrit. For Buddhists, the teachings of Buddha are Dharma. According to Davis (2007), Dharma “is the spiritual path, a roadmap to enlightenment.” On the other hand, the Dharma is crucial since it leads individuals out of Samsara, which is the unrelenting suffering in life that human beings experience. In effect, individuals can only transcend the Samsara by following the Dharma. In their worldview, Buddhists view Buddha as a man whom they take refuge in while they considered Dharma a guide and not a dogma (Davis, 2007). In addition, Buddhism worldview of life is that it suffering as evidenced by the first of its noble truths.
Davis (2007) noted that, “The most basic lesson of a science class is to have a hypothesis, before you conduct an experiment. Then you record your observations and draw your conclusions.” In this regard, Davis (2007) identifies these similarities of science to Buddhism being a “science of the mind” when he notes that Buddhists observed that they achieved wisdom and happiness through meditation, which takes place in the mind. In effect, this makes them draw the conclusion that the Dharma worked.
According to H.H.Trulshik Rinpoche, the first teaching that Buddha gave was on the four noble truths in Buddhism (as cited in Davis, 2007). The first of these truths lies in the recognition and acknowledgement of the existence of suffering, which Davis noted is “an objective assessment of reality”. The second of these truths is that ignorance was the main point behind suffering. On the other hand, the third noble truth is that individuals could relieve suffering through spiritual practice. Finally, the fourth truth gives the path towards transcending the path of suffering (Davis, 2007)
According to Matthieu Ricard, Buddhists explained happiness as “the state of being, that comes from freedom” (as cited in Davis, 2007). In this regard, happiness does not mean pleasure in the Buddhism context. In addition, achieving happiness is best through following the Dharma (Davis, 2007).
Buddhism and Christianity Worldview
This section briefly outlines the distinct elements in Buddhism and Christianity worldview. In particular, the section considers the worldview, in the two religions, in relationship to the concept about God and some religious concepts, the soul, and suffering.
According to the Christian worldview of God, man’s creation was in God’s image, He is Ubiquitous, Supreme, and Omniscience. According to Christianity, the main goal of everything in life is to establish a close relationship with God. In effect, the oneness with god in Christianity is achievable through following the teachings of Jesus Christ, considered as the Son of God. These teachings of Jesus Christ are in the Bible. On the other, Davis (2007) noted that, Buddhists took refuge in Buddha who is “not a god but a guy.” In addition, Buddhists followed the teachings of Buddha contained in the Dharma, which is not a dogma as opposed to the Bible for Christians.
In Christian worldview of self, there is the strong belief that the relationship between the external God and the individual soul, which is eternal, will determine whether an individual will go to heaven or hell. In this regard, there is independence of an individual’s relationship with God, which is the reference to the relationship of their soul to God. On the other hand, Buddhists identify with an interconnection of all things in life. In effect, this means that there is an existence of cause and effect in all things according to Buddhism.
Finally, Buddhists and Christianity have different worldview on suffering. In this regard, Christianity relates the foundation of suffering to rejection of God. In effect, Christians further believe that continuous rejection of God brings suffering to humankind on earth. In addition, such people who reject God on earth await more suffering in hell. Furthermore, Christians believe that God sent Jesus Christ on earth to redeem humanity of its suffering. On the other hand, Buddhism view on suffering is that it results from ignorance. In addition, the intricate nature of suffering, as viewed by Buddhism, is relievable (Davis, 2007). In this regard, following the Dharma and most specifically following the four noble truths is crucial towards eliminating suffering of humanity according to Buddhism worldview of suffering.
Work Cited
Davis, W. (2007, February 2). Light At The Edge Of The World: Himalayas Science Of The Mind. Google Video. [Video File]. Retrieved from http://video.google.com/videoplay?docid=- 8093699829364187229 Read More
Share:
Tags
Cite this document
(“Short Writing Assignment Essay Example | Topics and Well Written Essays - 500 words”, n.d.)
Short Writing Assignment Essay Example | Topics and Well Written Essays - 500 words. Retrieved from https://studentshare.org/anthropology/1590770-short-writing-assignment

...?Please respond to these 3 people comments about they wrote please make it short and as a discussion format Person There are many advantages and disadvantages for each of these strategies, but market research and understanding is a must before deciding in either one. Mergers and acquisitions can be costly due to possible high legal expenses and the cost of acquiring a new company that might not be profitable in the short run; this is why research is very important.  The advantages of this strategy are that the cost of operation and/or production may be lower, you can increase market share and it allows you to expand your business with an already client base.  One of the disadvantages of entering a new...
1 Pages(250 words)Assignment

...Anthropology The specific article under examination is ‘English Is an Optimistic Language, Study Suggests’ (Parry). There are a number of reasons I found this article interesting. One of the most prominent reasons is that I have an interest in language and linguistics. While many individuals believe that language simply communicates reality, upon further examination it’s clear that different languages communicate culture differently. In choosing this article I was interested in discovering more about how different languages communicative these different aspects of culture and perspective. Another reason I found this article interesting was that as a student I recognize that writing is an important element of communication, as well...
2 Pages(500 words)Assignment

...Client’s 2 February The symbol of filing cabinet is developed in “The Street that got mislaid” by logical and concise examples. Marc, the protagonist made a fantastic decision by going and seeing the obscure street just to see how the inhabitants resided there and he found that a lot of people found solace there and decided not to disturb their happy world, he could have easily given the envelope to his superiors and that would have meant the end of the world for people who resided in that obscure street. The theme of filing cabinet is further developed into several other themes as the story progresses; dilemma is one theme which the story explores. Marc was in a dilemma whether to let the world know about the obscure street... 2 February...
2 Pages(500 words)Assignment

...Lesson Plan Affirmation The lesson plan will of be great importance because through it, one will not only have prior knowledge of what he or she is to teach but also enable him or her assess stability as well as that of the learners. Content Summary A mini saga is normally a short form of writing, normally fifty words, formulated by Brian Aldiss a professional writer specialized in science fiction. The fifty words in a mini saga must comprise of three sections, which are beginning, middle and end with the exclusion of a title. Mini sagas play a major role in short writing lessons because apart from being easy to read and comprehend, focuses on accuracy hence making it...
4 Pages(1000 words)Assignment

...Short Report Table of Contents Part I 3 (a) 3 (b) 4 (c) 5 Part II 7 References 8 Part I (a) It is believed that recruitment and selection is one of the most important processes in the operations of the business that significantly impacts other activities of any particular company. This impact can be in the domain of employee productivity, dedication and the quality of work they deliver among others. In accordance with the analysis of the given case, it can be said that the recruitment and selection approach also has a major impact on the aspect of employee turnover. Employee turnover refers to the number of employees which a company fails to retain. Reduction in employee turnover will ultimately result in decrease in...
5 Pages(1250 words)Assignment

...Topic: Assignment, Education: Short answer for each question: 9, 10, 11 of the University Topic: Assignment, Education: Short answer for each question: 9, 10, 11 9. PBS (positive behavior support) is a behavior management system employed to comprehend what retains an individual’s stimulating behavior and the program includes a primary, secondary and tertiary level interventions. Reinforcement can work, if the lacuna in a particular student is identified properly. Interventions are explicitly established for all these with the objective of decreasing the possibility of educational or societal letdown. Such intercessions can be...
1 Pages(250 words)Assignment

Writing a screenplay for a short

...out the names I would like to urge all those who will be released to be careful while out there in civilian. I urge you to be hardworking and good role models to your fellow countrymen. Everyone starts clapping. All the inmates are smiling. Silence prevails as the superintendent starts reading out the names. The inmates feel anxious; sigh of relief and happiness can be heard when an inmate hears his name. When all the names are read, the inmates whose names have not been read match back to the cells feeling disappointed. The priest then realizes that the inmates he was preaching to have both been left. He moves slowly towards them, and they hug happily. PRIEST (Happily) I am happy for you my brothers; God has heard your prayers. SECOND...
5 Pages(1250 words)Assignment

...Immigration Laws Immigration Laws The current laws regulating foreign workers were established over 25 years ago. However, due to the global changes in migration patterns and the increasing demand for qualified workers, there is a need to reform these regulations to match the modern time. According to various prominent personnel, there is a lack of STEM workers in the country (Hira & Stephan, 2014). Nonetheless, evidence proves that STEM graduates of the American origin are taking up other careers due to the unattractive wages in their designed field. The solution for the STEM career is to reform our laws and policies and not importing new taskforce that offers similar work at a cheaper price. The current immigration laws... Laws Immigration...
1 Pages(250 words)Assignment
sponsored ads
Save Your Time for More Important Things
Let us write or edit the essay on your topic "Short Writing Assignment" with a personal 20% discount.
GRAB THE BEST PAPER

Let us find you another Essay on topic Short Writing Assignment for FREE!