Comments (0)
Add to wishlistDelete from wishlist
Cite this document
Summary
This essay discusses the movie -Accidental Talent or a Curse. An 18-year-old boy learns about a secret book hidden in his father's bookshelf. The movie focuses on the life of the young boy as he tries to break away from the curse for the sake of his passion for music…
Download full paperFile format: .doc, available for editing
HIDE THIS PAPERGRAB THE BEST PAPER97.9% of users find it useful 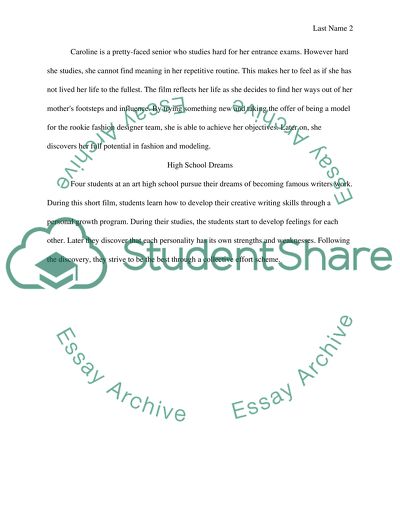 Short Film Synopsis Accidental Talent or a Curse An 18-year-old boy learns about a secret book hidden in his fathers bookshelf. His father warned himabout it, but the boy did not listen. He opens the book without considering the warning. No sooner did he open the book than the book released the power of music to his soul. The book not only gave him the talent to play music, but also imprisoned his heart in the talents place. In this charmingly serious fantasy, questions of whether the young boy realizes his passion in music at the height of his father’s curses stand out. The movie focuses on the life of the young boy as he tries to break away from the curse for the sake of his passion in music. However, his heart is forever imprisoned in the passion.
A Dare to Spare
Shana was about 19 years old when she left school to join the stunt double team. She found work and friends easily. However, she learned that some things are not as easy as she wished that they could. She found it difficult to choose between fame and friends. Her mission in life persisted, requiring her to make informed choices.
Over the Edge with Singing
Eva is an overweight waiter who served as a ghost singer for Jane, a famous singer for her lip syncs abilities. Although Eva had an amazing voice, her talent is overshadowed by Jane’s records and concerts. Hidden behind Janes shadows she strives to achieve recognition. The film focuses her decisions to change herself in order to be acceptable by the public and her singing career.
Gold Paradise
Caroline is a pretty-faced senior who studies hard for her entrance exams. However hard she studies, she cannot find meaning in her repetitive routine. This makes her to feel as if she has not lived her life to the fullest. The film reflects her life as she decides to find her ways out of her mothers footsteps and influence. By trying something new and taking the offer of being a model for the rookie fashion designer team, she is able to achieve her objectives. Later on, she discovers her full potential in fashion and modeling.
High School Dreams
Four students at an art high school pursue their dreams of becoming famous writers work. During this short film, students learn how to develop their creative writing skills through a personal growth program. During their studies, the students start to develop feelings for each other. Later they discover that each personality has its own strengths and weaknesses. Following the discovery, they strive to be the best through a collective effort scheme. Read More
Share:
Tags
Cite this document
(“Short Film Synopsis: Accidental Talent or a Curse Movie Review”, n.d.)
Retrieved from https://studentshare.org/visual-arts-film-studies/1603545-short-film-synopsis

CHECK THESE SAMPLES OF Short Film Synopsis: Accidental Talent or a Curse

... Ordinary Men “Ordinary Men” by Christopher Browning is a profoundly depressing book. Please, let the reader understand, it is not the endless litany of how many Jews were killed on this day or how many were transported on that day. No; Browning has wrought a work which showcases the “ordinary men” following orders, doing their job because those are the orders they were given. The first incident at Jozefow seared the consciences of the men involved and after that, what was left? Who could protest anything after participating in a bloody massacre, herding men, women and children into a woods and shooting them in cold blood? As Browning demonstrated, well over eighty percent of the battalion’s men neither protested nor objected... Ordinary Men...
2 Pages(500 words)Assignment

...?Accidental Heroes Whether heroes are born or made is a hotly debated issue. My position is that heroes are made by the decisions they have had to make under tough circumstances. In some cases, heroes even come out of breaking the established norms and rules in their respective worlds. They decided to break the rules for a noble purpose and emerged as heroes. This paper shall look into several movies where heroes are made by their deliberate decisions to violate the rules established by the society they live in, their government or their superiors. These movies are The Island, The Matrix, Percy Jackson and the Olympians: The Lightning Thief, and Ironman 2. The theme about violating established rules and emerging as a hero...
8 Pages(2000 words)Essay

Brief Synopsis of the Film Avatar

...I. Brief Synopsis of the film Avatar The setting of the film was largely located on planet Pandora which is a lush Earth-like moon orbiting the planet Polyphemus, a blue planet similar to Jupiter. Humans frequently go to Pandora because of its mineral unobtanium. The atmosphere in Pandora, however, is poisonous to humans while its inhabitants, the Na’vi, do not only survive but live in commune with nature under the rule of their goddess Eywa. For humans to explore planet Pandora, they have to link with their own avatars (courtesy of the Avatar Program) which is a “genetically-bred human-Na'vi hybrid”, and “function as if they were a Na'vi native” (IMDB). Colonel Miles Quaritch who heads...
4 Pages(1000 words)Essay

Review and synopsis of film The Terminator

...Review and synopsis of film 'The Terminator' Film: The Terminator Released on: January 1984 Director: James Cameron Producer: Gale Anne Hurd s: James Cameron, Gale Anne Hurd and Harlan Ellison Music: Brad Fiedel Main Actors: Michael Biehn as Kyle Reese, Linda Hamilton as Sarah Connor and Arnold Schwarzenegger as the Terminator. Synopsis 'The Terminator' is set in the year 2029, when a war takes place between man and machine. Machines want to finish the human race and take charge of the world. There is only one man named John Connor who has the courage to lead humans and fight against the machines. He is a threat to the machines. The machines program and send a...
2 Pages(500 words)Essay

...Claudia Koonz, a at Duke focused her research and writings on Nazi Germany to the role women played in the rise and reign of Hitler and his supporters. In that regard her book “Mothers in Fatherland” is a valuable source on this, still not enough probed, interesting topic. Koonz clearly recognizes the fact that Nazis were extremely misogynistic in viewing women’s roles in society. Hitler and Nazis did not openly hate women, but they did show mistrust toward them. That is why Hitler promised over and over again to create a new/old “privileged” position for women in Germany. Under the new role women were to be confined into homes as guardians of family and hearth. All major decisions were to be done by men only, women should take... Koonz, a...
4 Pages(1000 words)Assignment

Online Courses Are Considered for High School in fairfax County

...Case Synopsis Scotts fitness center has to focus on various constructs while devising a plan to increase its profitability and to compete in the market. They fitness center needs to ensure that the staff that is required to deliver the services is available at the facility at the right time. Due to this the programs should be scheduled when the staff is available. Furthermore, the organization can change its fee structure or charge a higher fee depending on the size of the facility and the hours in which the services are provided. Furthermore, the fee charged by the fitness center is even influenced by the availability as well as the access and the experience of the staff that is required to provide the services. If the...
2 Pages(500 words)Essay
sponsored ads
Save Your Time for More Important Things
Let us write or edit the movie review on your topic "Short Film Synopsis: Accidental Talent or a Curse" with a personal 20% discount.
GRAB THE BEST PAPER

Let us find you another Movie Review on topic Short Film Synopsis: Accidental Talent or a Curse for FREE!