Comments (0)
Add to wishlistDelete from wishlist
Cite this document
Summary
In the paper “Indian and Southeast Asian art” the author analyzes art and architecture in influencing South East Asian culture and architecture.  Indian art has continuously evolved through time and is still evolving. It begun with rock painting, moving onto rock cut caves and temple architecture…
Download full paperFile format: .doc, available for editing
HIDE THIS PAPERGRAB THE BEST PAPER94.6% of users find it useful 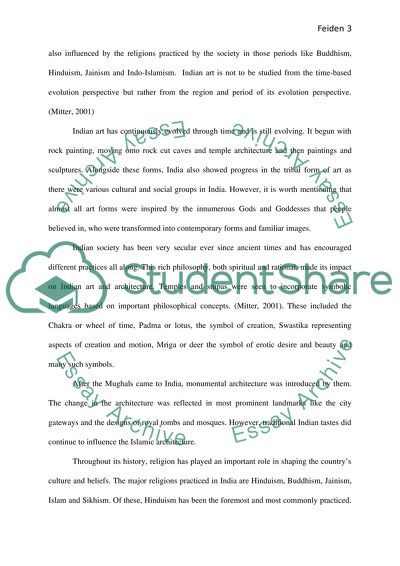 Download file to see previous pages Indian art is not to be studied from the time-based evolution perspective but rather from the region and period of its evolution perspective. (Mitter, 2001) Indian art has continuously evolved through time and is still evolving. It begun with rock painting, moving onto rock cut caves and temple architecture and then paintings and sculptures. Alongside these forms, India also showed progress in the tribal form of art as there were various cultural and social groups in India. However, it is worth mentioning that almost all art forms were inspired by the innumerous Gods and Goddesses that people believed in, who were transformed into contemporary forms and familiar images. Indian society has been very secular ever since ancient times and has encouraged different practices all along. This rich philosophy, both spiritual and rational, made its impact on Indian art and architecture. Temples and stupas were seen to incorporate symbolic languages based on important philosophical concepts. (Mitter, 2001). These included the Chakra or wheel of time, Padma or lotus, the symbol of creation, Swastika representing aspects of creation and motion, Mriga or deer the symbol of erotic desire and beauty and many such symbols. After the Mughals came to India, monumental architecture was introduced by them. The change in the architecture was reflected in most prominent landmarks like the city gateways and the designs of royal tombs and mosques. However, traditional Indian tastes did continue to influence the Islamic architecture. Throughout its history, religion has played an important role in shaping the country’s culture and beliefs. The major religions practiced in India are Hinduism, Buddhism, Jainism, Islam and Sikhism. Of these, Hinduism has been the foremost and most commonly...
Dance forms, puppetry and shadow plays were introduced to these countries by Indians in the early 7th century.  Later though Chinese influence was observed along with Islamic influence. Indonesia, a very strong Islamic country, still retained forms of Hindu art and culture like Shadow Puppet and literature like the Ramayana. That is common for most Mainland SEA except Vietnam where Hindu gods and arts were infused into Thai, Khmer, Burmese and Lao cultures.
Many SEA languages like Maley and Javanese contain words of Sanskrit of Dravidian origin and some languages like Thai are still written in some form of Indian derived scripts. Their concepts of kingship and social hierarchy were all adapted from ancient Hindu political theories. The Thai monarchy though follows Buddhism, requires the presence of Gour Brahmans for performing certain ceremonies. The images of Vishnu, lingas, Buddha and other Hindu cults are evidence of influence of Indian culture. Almost everywhere in SEA is a Buddha image showing influence of Guptas or Amravati’s.
The cult of Devaraja or God King, a derivate from Indian terminology, of cosmological and political ideas which was evident in the temple of Angkor Thom. The concept of worshipping a god and making a place of worship was implemented first ever in this temple. With time, the interaction between India and regional evolution started producing many distinctive styles of Indianised SEA art and architecture.
The other common factor between India and SEA was the worship of Lord Shiva. ...Download file to see next pagesRead More
Share:
Tags
Cite this document
(“Indian and Southeast Asian art Research Paper Example | Topics and Well Written Essays - 2250 words”, n.d.)
Retrieved from https://studentshare.org/visual-arts-film-studies/1408920-indian-and-southeast-asian-art
(Indian and Southeast Asian Art Research Paper Example | Topics and Well Written Essays - 2250 Words)
https://studentshare.org/visual-arts-film-studies/1408920-indian-and-southeast-asian-art.
“Indian and Southeast Asian Art Research Paper Example | Topics and Well Written Essays - 2250 Words”, n.d. https://studentshare.org/visual-arts-film-studies/1408920-indian-and-southeast-asian-art.
Comments (0)
Click to create a comment or rate a document

CHECK THESE SAMPLES OF Indian and Southeast Asian art

An Asian Miracle - Myth or Reality

To this was added the ‘entered’ Philippines (Billington, 1997). Japan experienced year after year of economic growth for 30 years while the other countries could sustain it only up to the mid-1990s.
Each of these countries had adopted strategic macroeconomic management disciplines. Rather than allow their country to be ‘colonized’, by foreign capital, they preferred to take their own initiative. The state played a key role in each case by way of mobilizing resources, supporting technology transfer, and inviting Foreign Direct Investment from developed countries. South Korea, Taiwan, Thailand, Indonesia, and Malaysia also received support from International economic agencies like the IMF, World Bank, AD...
6 Pages(1500 words)Assignment

..., eight-spoke wheels and the enlightenment elevation. The enlightenment elevation in the art emerges from the top of the head which is a symbol of creative power enlightenment. The other symbol used by the religion that is vital is the Hand Madras which is symbolic hand gestures. These symbols are found on sculptures erected on different Buddhist sites. Mandalas are sacred paintings created in Tibet and other Asian countries and are symbolic depiction of Buddha and other sacred incarnation of Buddha. The mandala’s figure or symbols enclosed within a circle which if enclosed in the square. The paintings are made from colored sand. The use of color sands is borrowed from part of the initiation roles done by the monks (Kleiner 23...
7 Pages(1750 words)Term Paper

...ART MANAGEMENT - CAREER PLAN FOR A YOUNG ARTIST and Art Management - Career Plan for a Young ArtistIntroduction Art can be defined as the imaginative human activities and the products that emanate from such activities. Art has been categorized in a number of activities ranging from the visual to the audio works. Examples of the audio include the plays, the music, films and dances among all other performing arts. This essay is going to focus on the visual part of the arts that involves the creation of the images and of the objects. The works in this category include the painting, printmaking, the sculptures and photograph. The essay will however focus on the painting works. This paper takes two parts. The first part will involve exploring...
9 Pages(2250 words)Term Paper
sponsored ads
Save Your Time for More Important Things
Let us write or edit the research paper on your topic "Indian and Southeast Asian art" with a personal 20% discount.
GRAB THE BEST PAPER

Let us find you another Research Paper on topic Indian and Southeast Asian art for FREE!