Comments (0)
Add to wishlistDelete from wishlist
Cite this document
Summary
It has often been said time and again that the strength of any nation is made from the country’s rich past, which explains how the particular nation came into existence.teh past is important as the future, meaning that without it, it is not easy to decide on a better path that…
Download full paperFile format: .doc, available for editing
HIDE THIS PAPERGRAB THE BEST PAPER91.4% of users find it useful 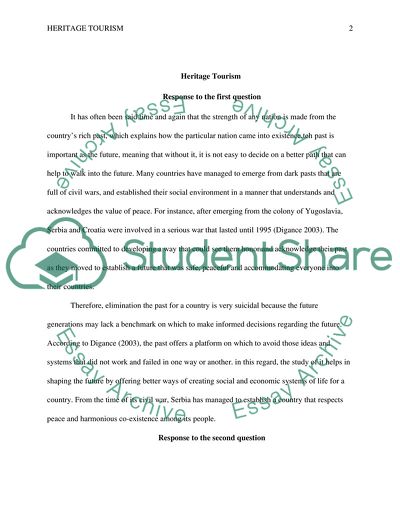 Heritage Tourism Heritage Tourism Response to the first question
It has often been said time and again that the strength of any nation is made from the country’s rich past, which explains how the particular nation came into existence.teh past is important as the future, meaning that without it, it is not easy to decide on a better path that can help to walk into the future. Many countries have managed to emerge from dark pasts that are full of civil wars, and established their social environment in a manner that understands and acknowledges the value of peace. For instance, after emerging from the colony of Yugoslavia, Serbia and Croatia were involved in a serious war that lasted until 1995 (Digance 2003). The countries committed to developing a way that could see them honor and acknowledge their past as they moved to establish a future that was safe, peaceful and accommodating everyone into their countries.
Therefore, elimination the past for a country is very suicidal because the future generations may lack a benchmark on which to make informed decisions regarding the future. According to Digance (2003), the past offers a platform on which to avoid those ideas and systems that did not work and failed in one way or another. in this regard, the study of it helps in shaping the future by offering better ways of creating social and economic systems of life for a country. From the time of its civil war, Serbia has managed to establish a country that respects peace and harmonious co-existence among its people.
Response to the second question
Every country has a way of ensuring that its history is well protected so that its future generations can learn from it and tread into their esteemed future. Almost every country has well established and stocked museums that contained various cultural aspects. These cultural centres provide good memories to the people who often are motivated with the spirit of adventure, wanting to know how their countries came into existence. According to Goulding & Dominic (2008), Croatia is one of the countries that contain a rich past, detailing how the country made its way from Yugoslavian colonial rule, creating an economy that is fostered on developing a peaceful country that values and appreciates peace.
One of the reasons why mapping a country’s history is important is informed by the need to preserve its cultural heritage. In this regard, this heritage serves as a good reminder of the country’s past, explaining the way of life in the olden days. By having this understanding, people can easily understand why and how life is changing. Secondly, mapping a country’s history helps in deciding on the kind of future that it endeavors to have. According to Goulding & Dominic (2008), Croatia’s dark past has been a good ingredient in enabling the country to create proper and effective social structures that people have come to accept and respect. Thirdly, mapping a country’s history is essential for comparison of different systems of life. For instance, it helps realise the mistakes that were committed before from failed systems, thus assisting in making effective structures and systems of proper political and social life.
References
Digance J (2003). Pilgrimage at Contested Sites. Annals of Tourism Research, 30(1): 143–159
Goulding C & Dominic D (2008). Heritage, Identity and Ideological Manipulation: The Case of Croatia. Annals of Tourism Research, 36(1): 85–102,
Bottom of Form
Bottom of Form
Bottom of Form Read More
Share:
Tags
Cite this document
(“Heritage Tourism, two subtopic questions Coursework”, n.d.)
Heritage Tourism, two subtopic questions Coursework. Retrieved from https://studentshare.org/tourism/1699381-heritage-tourism-two-subtopic-questions

...? Urban Tourism, Heritage and Culture: The Case of Amiens Cathedral, France Presented Urban Tourism, Heritage and Culture Cultural and heritage centers are remarkable for contributing towards tourism industry, and generating income to towns and communities. In addition, cultures and heritages may be remarkable for construction of historical narratives regarding a culture, or concerning particular communities. In most cases, promotion of heritage centers and cultural heritages are not meant for tourism, but to preserve identity of communities for long periods. This heritage may be a form of symbolism, representing spectacular events, which may have shaped the lives and history of the people concerned. The main aspect in conservation...
8 Pages(2000 words)Essay

... and historical aspects, entertainment and ethnicity. Facilities is the another dimension that acts in favour of travelling, which includes lodging, foods, support services, infrastructure etc. Then transportation, hospitality are the remaining two. At present cultural heritage sites are becoming the attractive tourist spots as the mode of intention for travelling changes. So now among the tourism industry cultural and heritage tourism industry is in the booming stage (Introduction- what is tourism, n.d.). This paper is aimed at providing an analytical perspective of various heritage and cultural tourism places across the globe. The paper thus discusses about the growth and development aspects of these places. Task 1: Understand the growth...
15 Pages(3750 words)Essay

...?Introduction Turnbridge and Ashworth (1996, p53) define heritage as “an inheritance or legacy that is transmitted from one generation to the next”. Since time immemorial, heritage has been used to mean a legal inheritance that an individual is entitled to from the will of a deceased. However, Bowen and Clarke (2007) noted that heritage tourism includes any kind of intergeneration relationship that is transferred from one generation to the next. This could include traumatic events occurring in a particular historical era and transferred to succeeding generations. However, every heritage contains real, underlying or symbolic importance that plays a critical role in terming its perception in society. This paper examines dark tourism...
8 Pages(2000 words)Essay

The Greco-Roman culture was restored and the period saw transformations in many areas such as the growth of city-states, mastery of arts, secularism and emphasis on the individual. There was also use of slaves, strengthening of papacy, and intellectual growth based on study of classical literary works of Greece and Rome (Spielvogel, 347- 352). Q2: How events or developments in Renaissance mark a break or departure from the key characteristics of middle Ages. The middle Ages were characterized by lack of classical culture and were the period 1000yrs between the end of Roman Empire and the new era of renaissance. The developments in renaissance marked a breakaway from the characteristics of the middle ages in that it emphasized on...
4 Pages(1000 words)Essay

...﻿Special Interest Tourism - Heritage Tourism UK In some countries, tourism is one of the major economic activities. Special interest tourism is the provision of customized leisure and recreational experiences following certain expressed interests of either individual or group. People falling under this category of tourists those with Specific interests. For example, those interested in birds or even sea creatures. Mostly small tourism enterprises handle this kind of tourists. Heritage tourism is one of the various forms of special interest tourism. Heritage tourism can be said to be, the practice of attracting tourists to a place based on the unique characteristics of that locale’s history, landscape, and culture. Heritage tourism...
8 Pages(2000 words)Essay

The increasing heritage tourism of the city of Bath is directly providing huge revenues to the UK tourism industry. However, the attention was given to the city of Bath after its recognition as a World Heritage Site. In the last few years, a major portion of budget has been allocated to the promotion of Bath City tourism industry, which has positively contributed to its tourism industry. This is also supported by the previous studies. The year 2009 is going to be an important year in the history of tourism industry of the UK because Government has brought various changes in its tourism policy. Although because of financial global crisis, the tourism industry of the UK has faced a decline however, it is expected that with new touri...
13 Pages(3250 words)Essay

... in the contract to sale must have the required contractual capacity hence competence to enter the agreement. The purpose of the contract must be legal in nature hence ability to pass the test of the law incase of any disagreement and the apparent consent of both the parties must be genuine and not a pretence. Finally, the agreement must be in whatever form as required by law. If the above contract to sale satisfies all the stated requisites then it will be said to be valid and enforceable by law hence should be undertaken since it is a binding agreement (Jentz, Clarkson, Miller and Cross 54-68). The contract to sale in the second case between the two companies that now indicates that the furniture is part of the sale makes the furniture...
2 Pages(500 words)Essay

... Two Questions Q Leading by example and by not command is one of the mot inspiring ways of leadership, this is based on the fact that the juniors are likely to listen to their seniors as they act as their role models.in this case, employee are probable to follow their leader in his presence and as well as in his absence (Lee & Terrence 274). At nation media group where I did my internship, the personnel applied a specialized language in the running of the media house, the results were a culture that was improved and shaped in a positivemanner. This was because the team members communicated easy and thus were able to understand each other effectively thus providing a comfortable working culture. In the three-week stay at the media house, I...
1 Pages(250 words)Admission/Application Essay

It always includes the enjoyment of cultural resources, historical origins, and the natural resources of a particular region. Heritage tourism normally helps in promoting and preserving the cultural values of a specific region or society. Therefore, it is beneficial to the tourists, as well as to the local people who are visited by the tourists.
Novelli (2009) denotes that the major motivation of special interest tourism is to enjoy a specific facility, culture or activity of a particular region. Therefore, the major motivation of special interest tourism is to experience these new products, cultures and facilities. Heritage tourism, as a special interest tourism is able to make tourists experience some cultural values of a pa...
7 Pages(1750 words)Essay
sponsored ads
Save Your Time for More Important Things
Let us write or edit the coursework on your topic "Heritage Tourism, two subtopic questions" with a personal 20% discount.
GRAB THE BEST PAPER

Let us find you another Coursework on topic Heritage Tourism, two subtopic questions for FREE!