Creat a one page course participation and self-assessment - Essay Example

Comments (0)
Add to wishlistDelete from wishlist
Cite this document
Summary
To ponder how they used to live and what they used to eat is really quite fascinating. This course presented much information to fuel my thinking and my imagination. It was interesting to learn, for…
Download full paperFile format: .doc, available for editing
HIDE THIS PAPERGRAB THE BEST PAPER91.5% of users find it useful 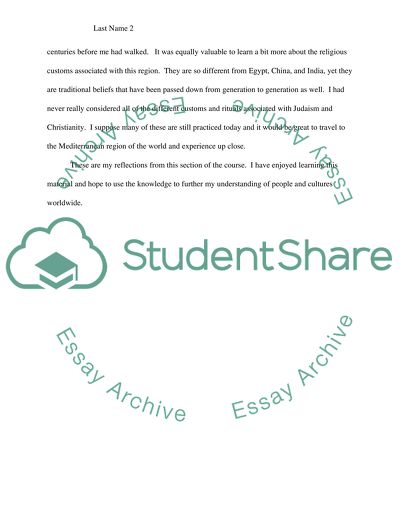 Day Month Year Self-Assessment I have always found the study of prehistoric beings to be fascinating. To ponder how they used to live and what they used to eat is really quite fascinating. This course presented much information to fuel my thinking and my imagination. It was interesting to learn, for example, the importance of salt in the ancient times. As people began to progress in what they ate, they quickly realized that salt was missing from their diet. It became a commodity, or ‘white gold’. It is the small things that we take for granted today, such as salt, that people in prehistoric times had to really struggle to obtain.
It was also interesting to consider the various countries of Egypt, China, and India and the important geographical features of each. I also stopped to consider the religions unique to each of these lands. Religion seems to divide us today, but it is certainly meant to unify. I wonder if religion was such a divisive issue back during these ancient times.
As we moved in Chapter 2 and looked at the ancient Mediterranean, I found myself wanting to travel there. This is a region so steep in history. Not only this, but this history seems alive today. The food in Greece, for example, is so unique and has been around for centuries. It would be great to travel there, see the ancient buildings, and walk on the very streets that people centuries before me had walked. It was equally valuable to learn a bit more about the religious customs associated with this region. They are so different from Egypt, China, and India, yet they are traditional beliefs that have been passed down from generation to generation as well. I had never really considered all of the different customs and rituals associated with Judaism and Christianity. I suppose many of these are still practiced today and it would be great to travel to the Mediterranean region of the world and experience up close.
These are my reflections from this section of the course. I have enjoyed learning this material and hope to use the knowledge to further my understanding of people and cultures worldwide. Read More
Share:
Tags
Cite this document
(“Creat a one page course participation and self-assessment Essay”, n.d.)
Retrieved from https://studentshare.org/tourism/1609987-creat-a-one-page-course-participation-and-self-assessment

(Creat a One Page Course Participation and Self-Assessment Essay)
https://studentshare.org/tourism/1609987-creat-a-one-page-course-participation-and-self-assessment.

“Creat a One Page Course Participation and Self-Assessment Essay”, n.d. https://studentshare.org/tourism/1609987-creat-a-one-page-course-participation-and-self-assessment.
Comments (0)
Click to create a comment or rate a document

The term itself derives from an ancient Greek word that translates to “love of wisdom” (Wikipedia, 2005) and it is through several early Greek thinkers that we have arrived at the perceptions we now foster. One of the greatest of these thinkers was Plato, who built off of the ideas of Socrates and others before him and wrote his ideas down in book form for future generations to benefit. His writings have contributed significantly to three main areas of philosophy including metaphysics, epistemology, and ethics. In any of these fields, new work is generally founded upon, or based on, ideas that were first brought forward by Plato more than 2000 years ago. For this reason, it is justified to say that Plato is one of the...
12 Pages(3000 words)Case Study

Despite the necessity of a highly integrated and converged international reporting system, it s...
15 Pages(3750 words)Research Proposal
sponsored ads
Save Your Time for More Important Things
Let us write or edit the essay on your topic "Creat a one page course participation and self-assessment" with a personal 20% discount.
GRAB THE BEST PAPER

Let us find you another Essay on topic Creat a one page course participation and self-assessment for FREE!