Comments (0)
Add to wishlist Delete from wishlist
Cite this document
Summary
Tourism forms the basis of income of many countries in various ways, one of which is creating employment. A high number of individuals benefit directly or indirectly from tourism. Therefore,…
Download full paper File format: .doc, available for editing
HIDE THIS PAPERGRAB THE BEST PAPER95% of users find it useful 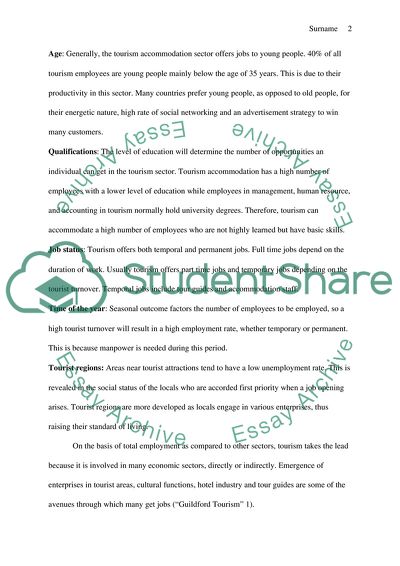 Extract of sample "Tourism and employment"

Download file to see previous pages The competition involved shows growth in the tourism sector. There is a need to meet the requirements of the ever growing tourism sector through innovations and upgrade of tourism products. There is also an increase in the number of hotels. This calls for more employment to cater for manpower, so many people are employed as caterers. Tourism has provided 10% of global employment as stated by the International Labour Organisation. Tourism as a service industry will require high workforce (Gheorghilaş and Dincă 90).
Gender: Tourism has created many opportunities for women usually in the hotel and accommodation sector. In this sector, 60% are women employees (Gheorghilaş and Dincă 92). Many women are employed on a full time basis while a few are part timers in many countries.
Age: Generally, the tourism accommodation sector offers jobs to young people. 40% of all tourism employees are young people mainly below the age of 35 years. This is due to their productivity in this sector. Many countries prefer young people, as opposed to old people, for their energetic nature, high rate of social networking and an advertisement strategy to win many customers.
Qualifications: The level of education will determine the number of opportunities an individual can get in the tourism sector. Tourism accommodation has a high number of employees with a lower level of education while employees in management, human resource, and accounting in tourism normally hold university degrees. Therefore, tourism can accommodate a high number of employees who are not highly learned but have basic skills.
Job status: Tourism offers both temporal and permanent jobs. Full time jobs depend on the duration of work. Usually tourism offers part time jobs and temporary jobs depending on the tourist turnover. Temporal jobs include tour guides and accommodation staff.
Time of the year: Seasonal outcome factors the number of employees to be employed, so a high tourist turnover will result in a ...Download file to see next pages Read More
Share:
Tags
Cite this document
(“Tourism and employment Essay Example | Topics and Well Written Essays - 1000 words”, n.d.)
Tourism and employment Essay Example | Topics and Well Written Essays - 1000 words. Retrieved from https://studentshare.org/tourism/1605615-tourism-and-employment

CHECK THESE SAMPLES OF Tourism and employment

In this context, it should be mentioned that Schuler et al. (1998, 159) there are a few issues that need to be taken into consideration when formulating the human resource strategy of a particular organizational environment: ‘a) the business structure, b) the legislative and employment relationship context, c) the patterns of HRM competence and decision-making and d) the national culture’. The above views are supported by Gooderham et al. (1999, 507) who stated that ‘despite their very different assumptions, both rational and institutional explanations of organizational structure and management practices predict similarity among firms that operate in the same industry within the context of a simple country’...
9 Pages (2250 words) Assignment

By virtue of the Health and Safety At Work Act 1974 the employer is under a statutory duty to maintain the water and sewage plant if it is reasonable and practical to do so. The duty is contained in Section 2 which mandates that the employer ensure the safety and welfare of all empl...
15 Pages (3750 words) Case Study

On the other hand, the change in the forms of employment has led to a decrease in employees’ performance in the high percentage of organizations internationally. Towards this direction, McGovern et al. (2004, 225) stated that ‘the rapid growth in nonstandard forms of employment toward the end of the 20th century has fuelled claims about the spread of "bad jobs" within Anglo-American capitalism; research from the United States indicates that such jobs have more bad characteristics than do permanent jobs after controlling for workers’. In other words, the bad conditions in the workplace – lack of communication and cooperation among the employees - but also between the employees and the firm’s owners - l...
13 Pages (3250 words) Term Paper

Through the course of history, it can be observed that the role of the female members of the population is continuously being leveled to that of the male, thus, in terms of the number of employees and organizational positions that are being held by women, the change is evident.  It can be considered that upon the achievement of the women to have equal opportunity to work and excel in the career of choice, the number of labor participation had increased. To be able to determine and present the objectives of the study, it is important to consider different issues that are related to the topic at hand. The main basis of the said notion is on the basis of different reasons such as in terms of the economic, family and social aspec...
12 Pages (3000 words) Literature review

Researches show that Senegal was inhabited in ancient times. Islam occupied the land as early as the 11th century thus making many Senegalese to be Muslims. The French So...
7 Pages (1750 words) Assignment

Chapter 5: Conclusions: This chapter will detail the conclusions of the research and will also include the recommendations by the researcher. The limitations of this research will also be included and further research recommendations for the same will also be included.
Human resource managers have a major impact on organizations and they hold a very responsible position. The duties of the HR managers are to ensure that the organization employs the right set of employees and there is also a good mix of skills within the organization. It is also to ensure that all the activities and processes relating to the employees are handled and completed in sync with the culture, values, and mission of the company.
The main reason to...
8 Pages (2000 words) Assignment
sponsored ads
Save Your Time for More Important Things
Let us write or edit the essay on your topic "Tourism and employment" with a personal 20% discount.
GRAB THE BEST PAPER

Let us find you another Essay on topic Tourism and employment for FREE!