Comments (0)
Add to wishlist Delete from wishlist
Cite this document
Summary
This piece presents a review on the author's experience in the city of New York. To be precise, the essence of this article is a remembrance of good times experienced during the summer vacation, in the big city of New York as a child. …
Download full paper File format: .doc, available for editing
HIDE THIS PAPERGRAB THE BEST PAPER98.2% of users find it useful 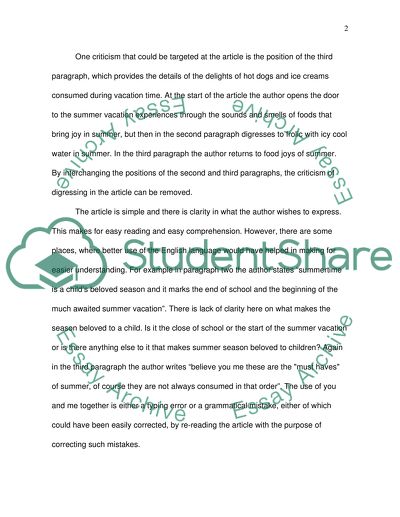 Review The essence of this article is a remembrance of good times experienced during the summer vacation, in the big of New York as a child. This remembrance by the author rekindles the fond memories of summer vacations that linger on in any reader. The article is interesting, as it jogs the memory that as a child it was simple things like eating ice creams, playing in water, or playing with newly found playmates that enlivened the summer vacations, and heightened the joy experienced.
The author develops the joyful experiences of summer vacations in New York in a systematic and coherent manner. Starting with the sounds and smells that are a hallmark of summer vacations, the author moves on to the activities and experiences that can be expected to be a part of the summer vacation experiences in a big city. The friendliness and the bonhomie during vacation time are brought out well by the author.
It is in its simplicity and the totality of the picture it presents that lie its strengths. These are very plausible experiences that children go through during summer vacations and it is these simple things that linger in the minds, even with the passage of time. It is easy for the reader to become a part of the article, as it contains experiences that are similar to what a reader would have had during the summer vacations as a child.
One criticism that could be targeted at the article is the position of the third paragraph, which provides the details of the delights of hot dogs and ice creams consumed during vacation time. At the start of the article the author opens the door to the summer vacation experiences through the sounds and smells of foods that bring joy in summer, but then in the second paragraph digresses to frolic with icy cool water in summer. In the third paragraph the author returns to food joys of summer. By interchanging the positions of the second and third paragraphs, the criticism of digressing in the article can be removed.
The article is simple and there is clarity in what the author wishes to express. This makes for easy reading and easy comprehension. However, there are some places, where better use of the English language would have helped in making for easier understanding. For example in paragraph two the author states “summertime is a child’s beloved season and it marks the end of school and the beginning of the much awaited summer vacation”. There is lack of clarity here on what makes the season beloved to a child. Is it the close of school or the start of the summer vacation or is there anything else to it that makes summer season beloved to children? Again in the third paragraph the author writes “believe you me these are the "must haves" of summer, of course they are not always consumed in that order”. The use of you and me together is either a typing error or a grammatical mistake, either of which could have been easily corrected, by re-reading the article with the purpose of correcting such mistakes.
Recommendations for revising the article are limited to the interchanging of paragraphs two and three and rereading the article to remove typing errors and grammatical errors, and strengthening of the use of English language, where there is an apparent weakness in it. Read More
Share:
Tags
Cite this document
(“New York Experience Essay Example | Topics and Well Written Essays - 500 words”, n.d.)
New York Experience Essay Example | Topics and Well Written Essays - 500 words. Retrieved from https://studentshare.org/tourism/1549451-new-york-experience

Dining experience in a New York

The examination of Ninja New York is one which goes a step further with the services provided, not only for the taste and expectations in quality. This is furthered with creating a story behind the operations and management while displaying alternatives within the industry for those that are interested in the food and beverages. Examining how this particular operation has worked and the results which have occurred provide opportunities with those who are providing services in restaurants while examining challenges that this also creates. Analysis of Ninja New York The basis of Ninja New York immediately moves outside of the competition by creating a myth behind the food and beverages provided. The basis of this is to show a myth...
12 Pages (3000 words) Essay

... the others closed. This inspiration had led me right from my childhood to try hard with all the possible options and not to give up till the goal is achieved. In this context the determining factor between success and failure is the choice of option and approach. I had the first experience of this sort when my passion for dancing was challenged as my physique out-grew other girls in the team and I became the odd one out. Though I had to quit, my determination inspired me to discover other possible doors which could lead me across the challenge. I could successfully find another way with in few months as I identified a new trend in folk dance featuring a leader who was taller than others. My sincerity, confidence, and commitment convinced...
6 Pages (1500 words) Essay

It has as a central idea that whatever else Man does will ultimately end up as nothing. This is the cen...
8 Pages (2000 words) Term Paper

Also, I would like to know which of these activities are age-appropriate for the children, and whether the activities are going to improve their concentration and how long each activity is going to keep their interest. Additionally, I would like to improve the activity to make it better the next time it is repeated.
Furthermore, I would be keen to learn what language would be most effective to use to help children understand so that they are able to comprehend, follow instructions and ask questions. I would also assess them to see how previous knowledge can help them in new activities.
I would liaise with the class teachers in planning and delivering lessons through the interactive whiteboard (IWB). This will be helpful...
7 Pages (1750 words) Personal Statement
sponsored ads
Save Your Time for More Important Things
Let us write or edit the essay on your topic "New York Experience" with a personal 20% discount.
GRAB THE BEST PAPER

Let us find you another Essay on topic New York Experience for FREE!