Comments (0)
Add to wishlist Delete from wishlist
Cite this document
Summary
Focusing on wine tourism as a growing area of business, the researcher laid the background on the premise that, the key to the continued growth and success of wineries in the world's wine producing region is in meeting customer's expectations and wine products attributes.
…
Download full paper File format: .doc, available for editing
HIDE THIS PAPERGRAB THE BEST PAPER94.2% of users find it useful 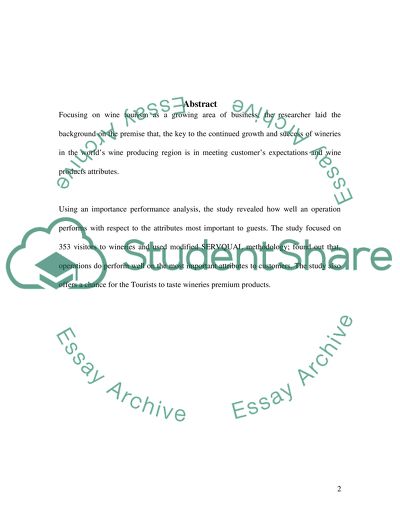 Download file to see previous pages Focusing on wine tourism as a growing area of business, the researcher laid the background on the premise that, the key to the continued growth and success of wineries in the world's wine producing region is in meeting customer's expectations and wine products attributes.Using an importance performance analysis, the study revealed how well an operation performs with respect to the attributes most important to guests. The study focused on 353 visitors to wineries and used modified SERVQUAL methodology; The study also offers a chance for the Tourists to taste wineries premium products.In recent years, the growth in tourism in the world's wine producing regions has grown rapidly. This has not only attracted the attention of researchers with increasing attention on various aspects of wine tourism, but has attracted the flow of international capital towards this direction. Wine tourism today is widely acknowledged as a growing area of special interest as agued by the researcher.The main problem statement of the research is defined within three folds. Firstly the study focused on visitors' perceptions of the service received at the cellar door-that is, at the winery-and the effect of that service on consumer satisfaction, brand loyalty, and long-term behavioral intention. The study addressed further, the issue of customer service in the emerging wine-tourism sector. Thus an important objective of the study is the definition of the concept of wine tourism as it analysed the linkages between wine quality and brand values, as well as the role of a visit to the cellar door in reinforcing these linkages. Another objective of this paper is the identification of the attributes of service quality as they apply to visits to wineries.
1.2 Research Methods and Design
In the study, the researcher adopted a largely quantitative approach to identify significant trends among current visitors to wineries. The researcher however, criticized the method as not well suited to exploring the underlying symbolism or meaning of a visit to a winery34 or to gaining a deep understanding of the needs and motivations that lead individuals to visit a winery. Such an approach would form a future avenue of inquiry, and our quantitative survey may indicate questions that could usefully be explored with deeper qualitative research.

1.3 Findings of Research
The researcher ran a series of T-tests and evaluated where mean performance scores differed significantly from the mean importance scores. The findings revealed a high degree of colinearity within the results for both the perception and the importance measures. According to the researcher, the result presented true accurate reflections of
Visitor's perception when recorded. Results of the study also showed operators in the wineries are marginally underperforming as visitors proofed to be unhappy with the quality of wine offered for tasting, as most premium wines were out of stock and the wine tasting fees were high.
The study came out with many exciting findings. The study first of all found out that Operators do seem to be experiencing some difficulty, though, with respect to the relational aspects of the cellar-door experience. This interesting finding reinforced the importance of ...Download file to see next pages Read More
Share:
Cite this document
(“Wine production and tourism Essay Example | Topics and Well Written Essays - 750 words”, n.d.)
Retrieved from https://studentshare.org/tourism/1533578-wine-production-and-tourism

CHECK THESE SAMPLES OF Wine production and tourism

Heritage is anything that is transmitted from the past and could include original cultural and natural material, the built environment, the archaeological resource, the intangible heritage and the natural heritage (Nurick, 2000). There is some significance attached to these which make it worth preserving for the self as well as for the future generations. The UK’s heritage is a major contributor to the tourism industry. Virtually all tourism in the UK is partial...

It acts as regeneration support in both urban and rural areas. England Tourism is healthy, liberate industry that contributes to the wealth and employment of the nation. It also acts as a support for many other services and the manufacturing sector. There is also increasing competition from the overseas market. “Growth in international tourism in the second half of the twentieth century is a reflection of a range of changes taking place in the global economic, social and political environments. Foremost among these changes is the widespread and rapid economic growth that has made travel more feasible for an increasing number of the world's population and the improvements in transport and communication technology which have m...
6 Pages (1500 words) Assignment

The company then added the Real Estate segment which comprised 6 percent of the...
9 Pages (2250 words) Case Study

Medieval sources refer to pottery or ceramics as Khazar, fakhkhar, and chadar, and the generic term sini is used particularly for fine glazed ceramics. The term sini is derived from the Arabic word for China – al-Sin – since both potters and consumers of the med...
10 Pages (2500 words) Case Study

Researches show that Senegal was inhabited in ancient times. Islam occupied the land as early as the 11th century thus making many Senegalese to be Muslims. The French So...
7 Pages (1750 words) Assignment
sponsored ads
Save Your Time for More Important Things
Let us write or edit the essay on your topic "Wine production and tourism" with a personal 20% discount.
GRAB THE BEST PAPER

Let us find you another Essay on topic Wine production and tourism for FREE!