Comments (0)
Add to wishlist Delete from wishlist
Cite this document
Summary
The main purpose of this writing is to represent an understanding of different approaches and techniques designed to produce, prioritize monitor and evaluate tourism/aviation policy, which has moved beyond the realms of simple descriptive statistics…
Download full paper File format: .doc, available for editing
HIDE THIS PAPERGRAB THE BEST PAPER95% of users find it useful 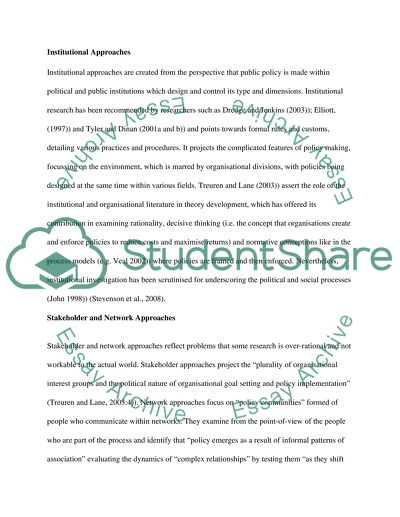 Extract of sample "Approaches and Techniques for Tourism/Aviation Policy"

Download file to see previous pages Institutional approaches are created from the perspective that public policy is made within political and public institutions which design and control its type and dimensions. Institutional research has been recommended by researchers such as Dredge and Jenkins (2003)); Elliott, (1997)) and Tyler and Dinan (2001a and b)) and points towards formal rules and customs, detailing various practices and procedures. It projects the complicated features of policy making, focussing on the environment, which is marred by organisational divisions, with policies being designed at the same time within various fields. Treuren and Lane (2003)) assert the role of the institutional and organisational literature in theory development, which has offered its contribution in examining rationality, decisive thinking (i.e. the concept that organisations create and enforce policies to reduce costs and maximise returns) and normative conceptions like in the process models (e.g. Veal 2002)) where policies are framed and then enforced. Nevertheless, institutional investigation has been scrutinised for underscoring the political and social processes
Stakeholder and network approaches reflect problems that some research is over-rational and not workable to the actual world. Stakeholder approaches project the “plurality of organisational interest groups and the political nature of organisational goal setting and policy implementation”. Network approaches focus on “policy communities” formed of people who communicate within networks.
They examine from the point-of-view of the people who are part of the process and identify that “policy emerges as a result of informal patterns of association” evaluating the dynamics of “complex relationships” by testing them “as they shift and change” (John, 1998, p.91)). Network theory assists to “explain the complexity of the policy arena and the multi dimensional nature of it” (Tyler and Dinan, 2001b, p. 243)). Nonetheless, it is criticized by John (1998)) who argues that networks need to be connected to other elements like stakes, concepts and institutions which decide how networks work. Bramwell (2006)); ...Download file to see next pages Read More
Share:
Tags
Cite this document
(“Approaches and Techniques for Tourism/Aviation Policy Essay”, n.d.)
Approaches and Techniques for Tourism/Aviation Policy Essay. Retrieved from https://studentshare.org/tourism/1472899-research-approaches-and-techniques-designed-to

CHECK THESE SAMPLES OF Approaches and Techniques for Tourism/Aviation Policy

The great Ray Harryhausen created some of the most advanced special effects of the time within this film. The scenes are exciting and thrilling, although by today’s standards it is easy to spot the differences between what is created and what is filmed from life. Still, the special effects in Jason and the Argonauts are some of the best examples of Ray Harryhausen’s stop-motion animation available. The movie is a mythological creature that is the eighth collaboration between producer Charles Schneer and Harryhausen. Ray Harryhausen’s contributions included those of co-producer,...
13 Pages (3250 words) Term Paper

Health promotion must emphasise both the mental and physical aspects of health because many physical manifestations of the disease have their roots in mental and psychological distress. This brief essay presents an examination of health promotion efforts designed to contain eating disorders, which are physical manifestations arising out of mental and psychological burdens imposed mostly by peers in schools. A discussion about eating disorders, which represent disorders with psychological roots, should assist in encouraging communities to inculcate respect for the individual, tolerance and harmony together with education to empower the individual.
It is important to have positive attitudes about health. Healthy nations are lik...
6 Pages (1500 words) Coursework

Let us find you another Essay on topic Approaches and Techniques for Tourism/Aviation Policy for FREE!