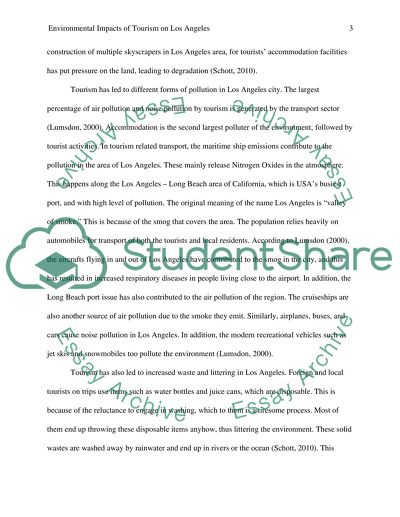 Extract of sample "Environmental impacts of tourism on Los angles"

Download file to see previous pages In addition, apart from the adverse effects of tourism development on the environment, it can also result in positive effects on the environment. This will mainly include the protection and conservation of the environment. Los Angeles located in the Southern California, is a populous city, whose coastal nature makes it a hub for various aesthetic human activities, including tourism. However, the highly urbanized coastal city faces many threats due to the increased human activities in the area, including plans to develop on all the remaining open space. This case continues to fuel heated debates between the government, environmentalists, and developers. Available coastal resources for tourism in the city include beaches, coastal marshes, boardwalks, and ecological attractions such as kelp forests, tide pools, and coastal marshes (“Travel Weekly”). In Los Angeles, the impact of tourism presents the area with a variety of effects. The high population of Los Angeles city puts pressure on the available natural resources, which are limited. Natural resources include soil, forests, fossil fuels, wildlife, and wetland. Both the residents of Los Angeles and tourists all struggle to experience the resources. On the other hand, humans put a direct pressure on the land’s renewable and non-renewable energy. The construction of multiple skyscrapers in Los Angeles area, for tourists’ accommodation facilities has put pressure on the land, leading to degradation (Schott, 2010). Tourism has led to different forms of pollution in Los Angeles city. The largest percentage of air pollution and noise pollution by tourism is generated by the transport sector (Lumsdon, 2000). Accommodation is the second largest polluter of the environment, followed by tourist activities. In tourism related transport, the maritime ship emissions contribute to the pollution in the area of Los Angeles. These mainly release Nitrogen Oxides in the atmosphere. This happens along the Los Angeles – Long Beach area of California, which is USA’s busiest port, and with high level of pollution. The original meaning of the name Los Angeles is “valley of smoke.” This is because of the smog that covers the area. The population relies heavily on automobiles for transport of both the tourists and local residents. According to Lumsdon (2000), the aircrafts flying in and out of Los Angeles have contributed to the smog in the city, and this has resulted in increased respiratory diseases in people living close to the airport. In addition, the Long Beach port issue has also contributed to the air pollution of the region. The cruiseships are also another source of air pollution due to the smoke they emit. Similarly, airplanes, buses, and cars cause noise pollution in Los Angeles. In addition, the modern recreational vehicles such as jet skis and snowmobiles too pollute the environment (Lumsdon, 2000). Tourism has also led to increased waste and littering in Los Angeles. Foreign and local tourists on trips use items such as water bottles and juice cans, which are disposable. This is because of the reluctance to engage in washing, which to them is a tiresome process. Most of them end up throwing these disposable items anyhow, thus littering the environment. These solid wastes are washed away by rainwater and end up in rivers or the ocean (Schott, 2010). This contributes to ...Download file to see next pages Read More
Share:
Tags
Cite this document
(“Environmental impacts of tourism on Los angles Research Paper”, n.d.)
Environmental impacts of tourism on Los angles Research Paper. Retrieved from https://studentshare.org/tourism/1465050-environmental-impacts-of-tourism-on-los-angles

CHECK THESE SAMPLES OF Environmental impacts of tourism on Los angles

The storms may be dust or the sand, hail and the thunder but they cause destruction and result in a total shutdown of business due to damage to the buildings.
Torrential rainfall can also add to an economic crisis and huge losses for rain also affects the buildings especially the acid rain (Wallace, Alfred Russel, 1889). This type of rain is corrosive in nature which results in deteriorating structures and a lot of costs are required for the maintenance (J. S. 0guntoyinbo and F. 0. Akintola, 1983). The acid rainfall causes the structure to degrade which results in increased requirements not only of cost but also increased manpower. Nowadays, we see such problems occur in places where the countries are very industrialize...
7 Pages (1750 words) Case Study
sponsored ads
Save Your Time for More Important Things
Let us write or edit the research paper on your topic "Environmental impacts of tourism on Los angles" with a personal 20% discount.
GRAB THE BEST PAPER

Let us find you another Research Paper on topic Environmental impacts of tourism on Los angles for FREE!