Comments (0)
Add to wishlistDelete from wishlist
Cite this document
Summary
Events are important for the tourism industry, since they increase the reputation of the destination, confers economic benefits, attracts more visitors and creates a positive image for the destination. Tourism events mostly entail meetings, sports, entertainment and leisure activities. …
Download full paperFile format: .doc, available for editing
HIDE THIS PAPERGRAB THE BEST PAPER98.1% of users find it useful 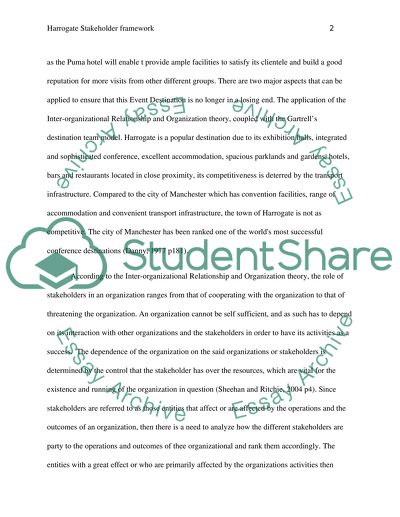 Extract of sample "Critical appraisal of a Harrogate Stakeholder framework"

Download file to see previous pages The skills required for organizations of such events include a competitive bidding process, incentives and reward schemes and exposure to risks. Knowledge of appropriate marketing tools such as virtual events that allows people to participate in destination events by obtaining materials from the web is vital.
As a leading British conference and exhibition town, Harrogate’s poor infrastructure is detrimental to its status as an International event destination. Poor transport links and lack of hotel rooms caused one of the major visitor organizations to change its destination to Manchester. In working with other stakeholders groups, the destination will benefit a lot. This is so because, the government will act as a catalyst in speeding up the destinations promotion, through policy and legislative formulations as well as funding. Since there lacks good service link of the town with other major towns such as London, while traffic congestion is huge during major events, the collaboration of the destination with the government and other relevant authorities will see it benefit in terms of improved transport facilities. Other organizations such as the Puma hotel will enable t provide ample facilities to satisfy its clientele and build a good reputation for more visits from other different groups. There are two major aspects that can be applied to ensure that this Event Destination is no longer in a losing end. The application of the Inter-organizational Relationship and Organization theory, coupled with the Gartrell’s destination team model. Harrogate is a popular destination due to its exhibition halls, integrated and sophisticated conference, excellent accommodation, spacious parklands and gardens, hotels, bars and restaurants located in close proximity, its competitiveness is deterred by the transport infrastructure. Compared to the city of Manchester which has convention facilities, range of accommodation and convenient transport infrastructure, the town of Harrogate is not as competitive. The city of Manchester has been ranked one of the world's most successful conference destinations (Danny, 1977 p181). According to the Inter-organizational Relationship and Organization theory, the role of stakeholders in an organization ranges from that of cooperating with the organization to that of threatening the organization. An organization cannot be self sufficient, and as such has to depend on its interaction with other organizations and the stakeholders in order to have its activities as a success. The dependence of the organization on the said organizations or stakeholders is determined by the control that the stakeholder has over the resources, which are vital for the existence and running of the organization in question (Sheehan and Ritchie, 2004 p4). Since stakeholders are referred to as those entities that affect or are affected by the operations and the outcomes of an organization, then there is a need to analyze how the different stakeholders are party to the operations and outcomes of thee organizational and rank them accordingly. The entities with a great effect or who are primarily affected by the organizations activities then becomes the forefront concern. While the primary stakeholders are directly involved and ...Download file to see next pagesRead More
Share:
Tags
Cite this document
(“Critical appraisal of a Harrogate Stakeholder framework Essay”, n.d.)
Retrieved from https://studentshare.org/tourism/1443191-critical-appraisal-of-a-harrogate-stakeholder-framework

CHECK THESE SAMPLES OF Critical appraisal of a Harrogate Stakeholder framework

Considering the goals and objectives of the organization, the various factors that have influenced the aspect of voting in favor of the emerging markets have been determined in this research paper. The critical evaluation of FIFA’s decision in awarding the emerging markets with the hosting rights of the Football Cup has been done by determination of the extent to which the goals and objectives of the governing body have been fulfilled with this decision (Baade and Matheson, 2004, p.353). The research problem also established the fairness of the World Cup Bidding Process and the basis of the FIFA Executive Committee’s decision in awarding the Football World Cup hosting to the developing countries. In order to analyze th...
29 Pages(7250 words)Dissertation

13 Pages(3250 words)Assignment
sponsored ads
Save Your Time for More Important Things
Let us write or edit the essay on your topic "Critical appraisal of a Harrogate Stakeholder framework" with a personal 20% discount.
GRAB THE BEST PAPER

Let us find you another Essay on topic Critical appraisal of a Harrogate Stakeholder framework for FREE!