Comments (1)
Add to wishlistDelete from wishlist
Cite this document
Summary
Stakeholders are individuals, groups or societies who depend on the organisation to fulfil their need and of which the organisation depends on to survive (Johnson & Scholes 2007). However, the notion of stakeholders was viewed differently by Pesqueux and Damak-Ayadi (2005).
…
Download full paperFile format: .doc, available for editing
HIDE THIS PAPERGRAB THE BEST PAPER91.1% of users find it useful 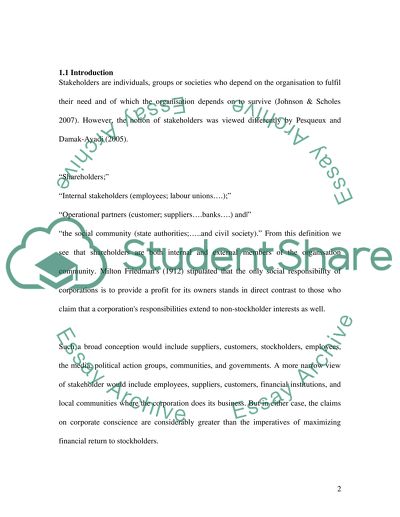 Download file to see previous pages
"the social community (state authorities;..and civil society)." From this definition we see that shareholders are both internal and external members of the organisation community. Milton Friedman's (1912) stipulated that the only social responsibility of corporations is to provide a profit for its owners stands in direct contrast to those who claim that a corporation's responsibilities extend to non-stockholder interests as well.

Such a broad conception would include suppliers, customers, stockholders, employees, the media, political action groups, communities, and governments. A more narrow view of stakeholder would include employees, suppliers, customers, financial institutions, and local communities where the corporation does its business. But in either case, the claims on corporate conscience are considerably greater than the imperatives of maximizing financial return to stockholders.
Today, a handful of researchers have gone as far as arguing that, the reasons for corporate restructuring or change are either competitive pressures, changing outside environments which in most cases is made up of mostly the stakeholders (Anderson et al. 2001). In the changing company environment, researchers have even gone as commending stakeholder approach as a key factor of organisational survival and success. Therefore, our caution to organisation management is that, they should skillfully consider how to treat particular groups of stakeholders and how to communicate with them responsively, being aware of the consequences of an omission or mistreatment.
Having said this, this paper seeks to identify and analyse the issue of power and interests of stakeholder groups for the University of Central Lancashire (UCLAN). In the section that follows, using the stakeholder theory and framework I will analyse the interest and power of the various stakeholders on the activities of the University of Central Lancashire.
Stakeholder Theory
Friedman (1963) as sited in Anderson et al. (2005) argues that a corporation is socially responsible only to its shareholders. In this regard, other corporate constituencies (stakeholders) can easily be overlooked. However, stakeholder theory strongly suggests that overlooking these other stakeholders is unwise and ethically unjustified. To this extent, stakeholder theory participates in a broader debate about business and ethics (Algas et al. 2006, Donaldson & Preston 1995)
Descriptively, some research on stakeholder theory assumes that managers who wish to maximize their firm's potential will take broader stakeholder interests into account. This gives rise to a number of studies on how managers, firms, and stakeholders do in fact interact (Friedman 1970, Steiner & Steiner 1997).Stakeholder theory has been articulated in a number of ways, but in each of these ways stakeholders represent a broader constituency for corporate responsibility than stockholders (Friedman 1970, Steiner & Steiner 1997).
In sharp contrast, according to stakeholder theory, managers should make decisions so as to take ...Download file to see next pagesRead More
Share:
Tags
Cite this document
(“Who Are Stakeholders Stakeholder Theory Essay Example | Topics and Well Written Essays - 3000 words”, n.d.)
Who Are Stakeholders Stakeholder Theory Essay Example | Topics and Well Written Essays - 3000 words. Retrieved from https://studentshare.org/miscellaneous/1500323-who-are-strakeholders

ot
othakuvalis added comment 1 year ago
Student rated this paper as
I never thought 3000 words essay could be written in such a free manner. I loved the idea of this essay. Will definitely use it for my own work!

...Shareholders vs. Stakeholders theory The talk of stakeholders is rampant these days with more and more firms drifting themselves towards corporate social responsibility. Managers in various firms have been forced to change their decision-making style and they've now begun to realize that their actions should not just revolve around the aims of the owners of the firms they work for, which usually is maximizing profits. Stakeholder theory is most closely associated with R. Edward Freeman, Olsson Professor of Applied Ethics at the University of Virginia's Darden School. The theory holds that managers ought to serve the interests of all those who have a "stake" in the firm. Stakeholders include shareholders, employees, suppliers, customers...
2 Pages(500 words)Essay

As pointed out in a study by Osgood and Halsall (2007) where they carried out research to examine the position of women in leadership or management positions, a “glass ceiling” exists for women in the academic setting, which could significantly impair motivation. Since many of the individuals employed in the early education sector are women, addressing this issue is even more important because these individuals are faced with the difficult task of shaping young minds while also dealing with the problems associated with the actual physical care of very young children. The quality of professionals in this sector is vital because it impacts the growth and development of the children that they care for. The degree of invol...
6 Pages(1500 words)Coursework
sponsored ads
Save Your Time for More Important Things
Let us write or edit the essay on your topic "Who Are Stakeholders Stakeholder Theory" with a personal 20% discount.
GRAB THE BEST PAPER

Let us find you another Essay on topic Who Are Stakeholders Stakeholder Theory for FREE!