The importance of authenticity in cultural tourism - Essay Example

Comments (0)
Add to wishlistDelete from wishlist
Cite this document
Summary
Cultural tourism is basically tourism of the past. It is a way for tourists to examine the land in which they are touring by exploring the customs and rituals of the native peoples, as these people hold the key to the heritage of the country. …
Download full paperFile format: .doc, available for editing
HIDE THIS PAPERGRAB THE BEST PAPER92.3% of users find it useful 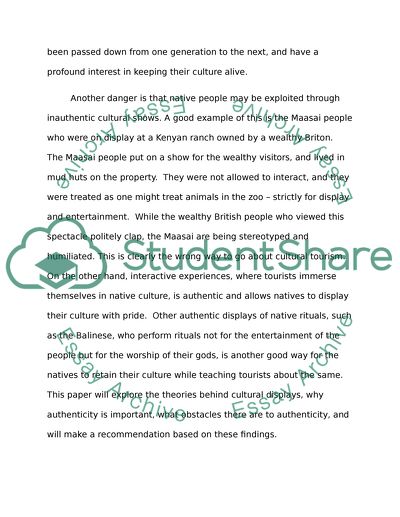 Extract of sample "The importance of authenticity in cultural tourism"

Download file to see previous pages The danger posed by cultural tourism is that culture may be lost. This is because the culture of the tourists and the culture of the natives may become intermingled, and there is no authenticity left. According to the view of those who coin the term “hyper-reality,” the result is that the distinction between inauthenticity and authenticity are collapsed. Therefore, authenticity is lost, and redefined according to a new paradigm that includes the mixing of tourist culture. This is obviously detrimental to the native populations, whose culture and rituals have been passed down from one generation to the next, and have a profound interest in keeping their culture alive.
Another danger is that native people may be exploited through inauthentic cultural shows. A good example of this is the Maasai people who were on display at a Kenyan ranch owned by a wealthy Briton. The Maasai people put on a show for the wealthy visitors, and lived in mud huts on the property. They were not allowed to interact, and they were treated as one might treat animals in the zoo – strictly for display and entertainment. While the wealthy British people who viewed this spectacle politely clap, the Maasai are being stereotyped and humiliated. This is clearly the wrong way to go about cultural tourism. On the other hand, interactive experiences, where tourists immerse themselves in native culture, is authentic and allows natives to display their culture with pride. Other authentic displays of native rituals, such as the Balinese, who perform rituals not for the entertainment of the people but for the worship of their gods, is another good way for the natives to retain their culture while teaching tourists about the same. This paper will explore the theories behind cultural displays, why authenticity is important, what obstacles there are to authenticity, and will make a recommendation based on these findings. A theoretical discussion of authenticity and culture in tourism Authenticity in culture tourism takes place on a variety of planes and is impacted by a variety of things. Wang et al. (1999) posits that authenticity in cultural tourism is complex. The reason for the complexity is because authenticity may be either defined as objective, constructive or existential. Objective authenticity comes from the ability to judge authenticity in an objective manner. Therefore, even if the tourists feel that something is authentic, it may nevertheless be inauthentic if it is objectively judged to be so. Constructive authenticity, on the other hand, means that objects are judged to be authentic by shifting standards, according to power structures, points of view, beliefs or perspectives. Therefore, constructive authenticity cannot be objectively measured, as it is a relative standard, contextually determined and ever-evolving (Wang et al., 1999, p. 351). Moreover, cultural heritage may be politicized, in that heritage may defined or re-defined to serve national needs. Such is the case in China, and this contributes to constructive authenticity as well (Sofield & Li, 1998, p. 364). The third way that authenticity is defined, according to Wang et al. (1999) is existentially. This means that the person feels self-actualized while viewing these cultural items, and, basically, the ...Download file to see next pagesRead More
Share:
Tags
Cite this document
(“The importance of authenticity in cultural tourism Essay”, n.d.)
Retrieved from https://studentshare.org/tourism/1433761-the-importance-of-authenticity-in-cultural-tourism

CHECK THESE SAMPLES OF The importance of authenticity in cultural tourism

Importance of ISO 9000 for Plym Yachts

...ISO 9000 Before probing into the issue of describing importance of international organization for standardization, ISO 9000, and then implementing itin the company, Plym Yachts, let’s first get a little introduction of ISO 9000. So starting with ISO 9000, it is that combination of systems that are made for such companies or businesses which have a motivation and enthusiasm for continuous growth and success in any specific competitive market. ISO 9000 is also said as that quality management system, which is combined with three other standards which are ISO 9000, ISO 9001, and ISO 9004. As we know that today’s business world is rapidly changing, it has become extremely important and crucial for any company or business to implement ISO 9000...
6 Pages(1500 words)Case Study
sponsored ads
Save Your Time for More Important Things
Let us write or edit the essay on your topic "The importance of authenticity in cultural tourism" with a personal 20% discount.
GRAB THE BEST PAPER

Let us find you another Essay on topic The importance of authenticity in cultural tourism for FREE!