Comments (0)
Add to wishlistDelete from wishlist
Cite this document
Summary
Name Tutor Task Date Introduction Dubai is known for its hospitality industry fashionable properties as tourism destinations and innumerable cuisines prepared by renowned chefs from across the globe. This paper intends to examine, analyze and evaluate the profile of hospitality in Dubai, assess opportunities of expanding operations and challenges that hinder international hospitality…
Download full paperFile format: .doc, available for editing
HIDE THIS PAPERGRAB THE BEST PAPER93.3% of users find it useful 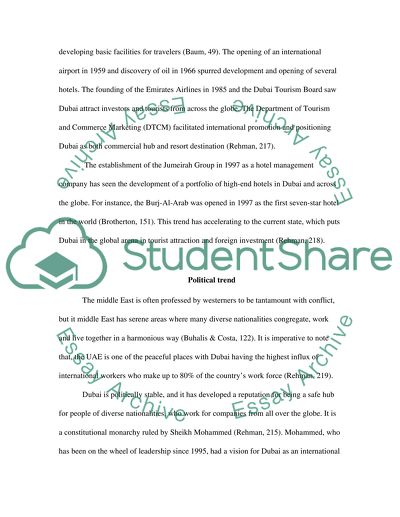 Download file to see previous pages Essentially Dubai is one of the countries that form the United Arab Emirates (UAE). Different ethnic groups reside in the Emirates, some of the include Pakistani, European, Bangladesh, Indian and Emirati. It is significant to note that, Middle East, is burgeoning in numerous ways, which include politically, economically and demographically (Baum, 47). It is evident that, much of the region’s wealth is attributable to having the world’s largest deposits of easily extractable oil and tourism activities. Background information The tourism industry in Dubai and in the whole Gulf region is comparatively young. Until the late 19550s, Dubai had no hotels. Visitors would spend with their hosts. It is noticeable that, the following two decades saw Dubai grow tremendously in developing basic facilities for travelers (Baum, 49). The opening of an international airport in 1959 and discovery of oil in 1966 spurred development and opening of several hotels. The founding of the Emirates Airlines in 1985 and the Dubai Tourism Board saw Dubai attract investors and tourists from across the globe. The Department of Tourism and Commerce Marketing (DTCM) facilitated international promotion and positioning Dubai as both commercial hub and resort destination (Rehman, 217). The establishment of the Jumeirah Group in 1997 as a hotel management company has seen the development of a portfolio of high-end hotels in Dubai and across the globe. For instance, the Burj-Al-Arab was opened in 1997 as the first seven-star hotel in the world (Brotherton, 151). This trend has accelerating to the current state, which puts Dubai in the global arena in tourist attraction and foreign investment (Rehman, 218). Political trend The middle East is often professed by westerners to be tantamount with conflict, but it middle East has serene areas where many diverse nationalities congregate, work and live together in a harmonious way (Buhalis & Costa, 122). It is imperative to note that, the UAE is one of the peaceful places with Dubai having the highest influx of international workers who make up to 80% of the country’s work force (Rehman, 219). Dubai is politically stable, and it has developed a reputation for being a safe hub for people of diverse nationalities, who work for companies from all over the globe. It is a constitutional monarchy ruled by Sheikh Mohammed (Rehman, 215). Mohammed, who has been on the wheel of leadership since 1995, had a vision for Dubai as an international hub for business and leisure. Mohammed realized his vision for Dubai quickly by the establishment of business centers, tourist attraction centers, which included skyscrapers such as the Burj Khalifa. It is the tallest building in the world. Such building makes Dubai distinct from the rest of the United Arab Emirates. They act as tourist attraction centers. It is imperative to note that, Dubai has managed to raise numerous sophisticated and pleasurable buildings even on water. The Burj Khalifa is illustrated below (Tizabi, 321). Additionally, is a member of numerous global organizations and associations, which include the Arab League, United Nations and World Trade Organization, this trend has sustained healthy relationships with the Western democratic countries. This membership has strengthened Dubai’s internal political stability (Tizabi, 317). Culture and religion background It is vital to note that, Dub ...Download file to see next pagesRead More
Share:
Tags
Cite this document
(“International Hospitality Operations Coursework”, n.d.)
International Hospitality Operations Coursework. Retrieved from https://studentshare.org/tourism/1401807-international-hospitality-operations
(International Hospitality Operations Coursework)
International Hospitality Operations Coursework. https://studentshare.org/tourism/1401807-international-hospitality-operations.
“International Hospitality Operations Coursework”, n.d. https://studentshare.org/tourism/1401807-international-hospitality-operations.
Comments (0)
Click to create a comment or rate a document

As a matter of fact, Hoffman’s statement that “international affairs is the nemesis of liberalism” has a grain of truth in it and this is especially so after the 9/11 incident.
There are two schools of thought or perspectives that are used to view international affairs: liberalism and realism. The study of these two perspectives is significant to the idea posed by Stanley Hoffman because they determine the reasons why international affairs, according to him, does not only see eye-to-eye with liberalism but seems to stand on the opposing side of it.
Liberalism can be defined as having four elements: citizens; the legislature; property rights, and; a market-driven economy (Dunne 186). Realism, on the othe...
6 Pages(1500 words)Assignment
sponsored ads
Save Your Time for More Important Things
Let us write or edit the coursework on your topic "International Hospitality Operations" with a personal 20% discount.
GRAB THE BEST PAPER

Let us find you another Coursework on topic International Hospitality Operations for FREE!