Comments (0)
Add to wishlistDelete from wishlist
Cite this document
Summary
The discussion of this report "Special Interest Tourism" majorly focuses on the new trend of tourism that has developed in this period of industrialization. The report helps in further portraying the findings that have been evaluated from various studies and survey reports.
…
Download full paperFile format: .doc, available for editing
HIDE THIS PAPERGRAB THE BEST PAPER98% of users find it useful 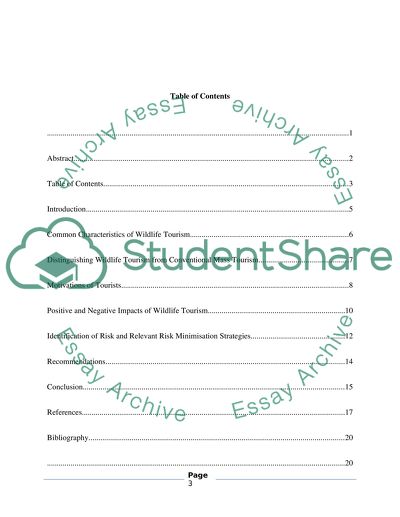 Download file to see previous pages Tourism is deemed to be one of the most popular recreational activities adopted by people across the world. In this rapidly altering environment, where technological advances have increased the degree of stress in the life of professionals, tourism can act as a remedy or relief in the lives of such individuals. However, in modern days tourism has been classified and named distinctly according to the nature or specific qualities, such as wildlife tourism, conventional mass tourism and tourism in terms of pilgrimage. Although, wildlife tourism is gaining popularity across the world due to the association of adventure and thrill, its impact on different species has attracted major concerns (Sinha, 2001).
Wildlife tourism has been observed to be playing an imperative role in the tourism industry and has considerably contributed to the growth of economy for several countries and communities. Activities such as watching wildlife animals in their natural setting, sports hunting, fishing and videotaping are associated with wildlife tourism which has been the major attractions for majority of the tourists. In addition to its negative impacts, this form of tourism has contributed significantly to the growth of awareness concerning wildlife by generating revenue for the purpose of conserving the forests. Furthermore, wildlife tourism has been able to generate jobs for the local communities, thereby reducing the unemployment rate of various developing countries and regions (Tapper, 2006).
(Tapper, 2006). The report will discuss the common characteristics of wildlife tourism. Furthermore, it will evaluate the distinct factors between wildlife tourism and Conventional Mass Tourism (CMT). The report will moreover discuss the motivational factors that attract tourists to participate in this form of tourism. It will also help to determine the impacts on the environment due to wildlife tourism. In addition, the report will identify the risks associated and recommend strategies for minimising those. Common Characteristics of Wildlife Tourism Wildlife tourism gained rapid recognition after the World War II by enabling tourists to get a view of different animals and species in national parks or forests owned by the government. Furthermore, this form of tour ...Download file to see next pagesRead More
Share:
Tags
Cite this document
(“Special Interest Tourism Essay Example | Topics and Well Written Essays - 3000 words”, n.d.)
Retrieved from https://studentshare.org/tourism/1401216-special-interest-tourism-report

However, in the case of Re 139 High Street, Deptford2, it was established that there had been a mistake in the conveyancing transaction and that one annexe on the property actually did not belong to the registered owner, who was the legal owner of the land. The owner of the annexe then asked for the register to be amended and this was done accordingly, in recognition of his interest beca...
6 Pages(1500 words)Case Study

In th...
8 Pages(2000 words)Case Study
sponsored ads
Save Your Time for More Important Things
Let us write or edit the essay on your topic "Special Interest Tourism" with a personal 20% discount.
GRAB THE BEST PAPER

Let us find you another Essay on topic Special Interest Tourism for FREE!