Comments (0)
Add to wishlistDelete from wishlist
Cite this document
Summary
The study aims to explore the motivations behind planning the tours and traveling behavior of the tourists in the contemporary era by furnishing special concentration upon the stimulations and inspirations of the visitors to the fabulous Kaiserstuhl region of Germany…
Download full paperFile format: .doc, available for editing
HIDE THIS PAPERGRAB THE BEST PAPER97.1% of users find it useful 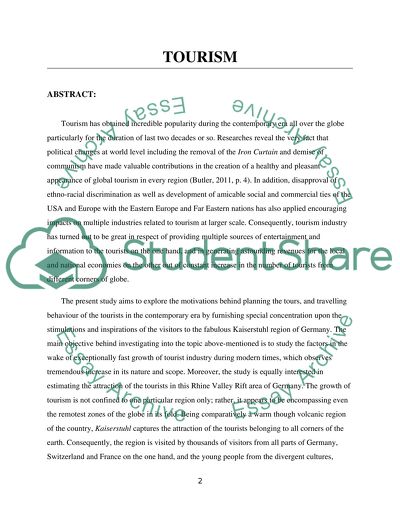 Extract of sample "Tourism in the German Kaiserstuhl Wine Region"

Download file to see previous pages It is evidently clear from the discussion that disapproval of ethnic-racial discrimination as well as the development of amicable social and commercial ties of the USA and Europe with the Eastern Europe and Far Eastern nations has also applied encouraging impacts on multiple industries related to tourism at the larger scale. Consequently, the tourism industry has turned out to be great in respect of providing multiple sources of entertainment and information to the tourists on the one hand, and in generating astounding revenues for the local and national economies on the other out of a constant increase in the number of tourists from different corners of the globe. The present study aims to explore the motivations behind planning the tours and traveling behavior of the tourists in the contemporary era by furnishing special concentration upon the stimulations and inspirations of the visitors to the fabulous Kaiserstuhl region of Germany. The main objective behind investigating the topic above-mentioned is to study the factors in the wake of exceptionally fast growth of the tourist industry during modern times, which observes the tremendous increase in its nature and scope. Moreover, the study is equally interested in estimating the attraction of the tourists in this Rhine Valley Rift area of Germany. Consequently, the region is visited by thousands of visitors from all parts of Germany, Switzerland and France on the one hand, and the young people from the divergent cultures, societies, socioeconomic positions and ethnic-racial backgrounds on the other, who arrive there throughout the year in order to enjoy and entertain themselves with the natural beauty as well as thrill environment this hilly wine and food zone offers to them. In addition, its splendid larger volcanic valleys and unique wine region also fascinate the attention of the young people. The researcher has elaborated on the topic under consideration within the historical perspective. In addition, the researcher looks for adopting the qualitative method of research while collecting the informational data for the present research. The data gathered from Emmendingen district as well as from the visitors to Kaiserstuhl have been analyzed, tabulated and computed in order to estimate the increase in the percentage of the tourists visiting the region under analysis. The results revealed the very fact that: there exists a noteworthy relationship between the wine and fruit producing warm land and its enthusiastic and thrill-seeking young visitors, which would not miss the opportunity of spending their vacations and quality time to visit such a wonderful and hygienic region, situated at the junction of Germany, France, and Switzerland i.e. Kaiserstuhl. ...Download file to see next pagesRead More
Share:
Tags
Cite this document
(“Tourism in the German Kaiserstuhl Wine Region Dissertation”, n.d.)
Tourism in the German Kaiserstuhl Wine Region Dissertation. Retrieved from https://studentshare.org/tourism/1399469-tourism
(Tourism in the German Kaiserstuhl Wine Region Dissertation)
Tourism in the German Kaiserstuhl Wine Region Dissertation. https://studentshare.org/tourism/1399469-tourism.
“Tourism in the German Kaiserstuhl Wine Region Dissertation”, n.d. https://studentshare.org/tourism/1399469-tourism.
Comments (0)
Click to create a comment or rate a document

CHECK THESE SAMPLES OF Tourism in the German Kaiserstuhl Wine Region

Theoretically, sources of CA can be...
7 Pages(1750 words)Term Paper

In th...
8 Pages(2000 words)Case Study
sponsored ads
Save Your Time for More Important Things
Let us write or edit the dissertation on your topic "Tourism in the German Kaiserstuhl Wine Region" with a personal 20% discount.
GRAB THE BEST PAPER

Let us find you another Dissertation on topic Tourism in the German Kaiserstuhl Wine Region for FREE!