Comments (0)
Add to wishlistDelete from wishlist
Cite this document
Summary
London is heavily populated with about 8 million people. This population dwarfs the tremendous flow of traffic in London by buses, underground and mainline railways, trams and cabs. However, considering the size of the passengers at 3 million daily, the transport system in London is second to none although its daily challenges of ferrying across its vast populace has somewhat frayed the system (Population of London, 2009).
…
Download full paperFile format: .doc, available for editing
HIDE THIS PAPERGRAB THE BEST PAPER99% of users find it useful 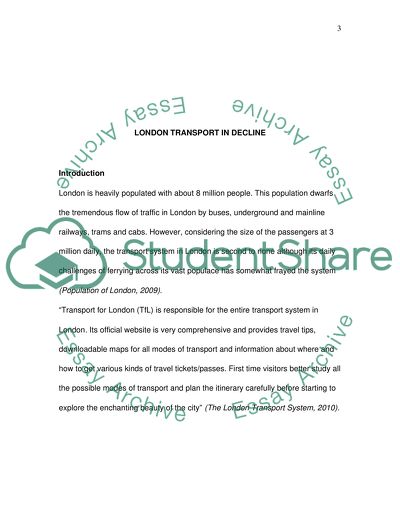 Download file to see previous pages First time visitors better study all the possible modes of transport and plan the itinerary carefully before starting to explore the enchanting beauty of the city" (The London Transport System, 2010).
During the peak hours, that is between 9.00 and 10.30 a.m. and 4.00 and 5.30 pm, the traffic could be daunting as these are the rush hours and people travel to and from during these hours. Other than these timings, traveling is relatively peaceful and enjoyable during rest of the day.
Traveling in London can get to the nerves when it slows down in certain places because of traffic congestion. But traffic congestion allows one to enjoy the sights even more. London has its share of stately buildings and parks. There is also the mighty river, Thames, flowing through the city. It is not for nothing that over 14 percent of the population in the United Kingdom lives in London.
However, the high population and business life in London has frayed the traveling system in London. Almost around the year, there is some repair or modification work at an Underground site that slows down travel by Underground rails. "Travel experts feel that the underground is showing its age, resulting in frequent delays, escalators going out of action and some stations being closed for repairs, especially during weekends. Though crime is not rampant, tourists are advised to avoid empty carriages, especially in the late hours. Smoking is prohibited both at the station and on the carriage. Tickets can be purchased at the station before entering the tube" (The London Transport System, 2010).
Figure 2 - London Transport Museum & Transport for London in early 20th century
"The London Underground is Europe's largest metro subway system and is the world's oldest underground system. It was inaugurated in 1863. It covers 253 miles of track and transports 976 million people yearly. The Underground is also connected to a variety of rail services to London's surrounding areas, including the Eurostar to Paris. Among these services is the Docklands Light Railway (DLR), a popular driverless light rail extension, which offers many scenic views of the Thames River and surrounding areas (Vacation Packages, 2009).
"London's buses go everywhere in the city. The map is a treasure in itself, because when you zoom in, you can see all the main roads, all the parks, all the attractions, the actual locations of all the tube stations and of course, where all the buses run. Similar maps are available on the TFL site for all the areas of outer London too. Have a look at the bus spider maps too, which show the routes in a diagrammatic form, which is easier to follow.
You can pay for individual journeys on the bus as you get on. Single journeys of any length in the central area cost 1.20 (0.40 for children). If you have a travelcard, you do not pay extra; just ...Download file to see next pagesRead More
Share:
Tags
Cite this document
(“Transport System of London Essay Example | Topics and Well Written Essays - 2000 words”, n.d.)
Transport System of London Essay Example | Topics and Well Written Essays - 2000 words. Retrieved from https://studentshare.org/technology/1507961-transport-system-of-london

CHECK THESE SAMPLES OF Transport System of London

A few decades ago there was no mention of any management of road vehicles. This was because there was not much traffic on roads to create problems from excess traffic. As the density of traffic increased with an increased human population a need was created to manage the movement of transport vehicles. As however the density and complexity of traffic have increased, complex and advance mathematics is increasingly being used to make this field more advanced and sophisticated.

The diversity of operations in companies has given the rise in a similar fashion to new areas of study such as transport study. This diversity is basically stemmed from a number of different factors. The primary factor which affects the formulation...
7 Pages(1750 words)Case Study

In order to compare the welfare system of the three proposed countries, it is important to first develop a comparative method that would guide in comparing the three states. For the purpose of this paper, a binary comparison would be conducted. The implicit comparison would deal with Britain while the explicit comparison would explore the USA and Canada. Thereby a small N’ study would be used, that is, of three countries.
The three countries selected to share a similarity in the form that these countries are a welfare state. This is when welfare is mainly funded by the state. While the USA and Canada focus on the liberal welfare state, the welfare state of the UK is not quite defined.
The comparison of the welfare...
8 Pages(2000 words)Term Paper
sponsored ads
Save Your Time for More Important Things
Let us write or edit the essay on your topic "Transport System of London" with a personal 20% discount.
GRAB THE BEST PAPER

Let us find you another Essay on topic Transport System of London for FREE!