Comments (1)
Add to wishlistDelete from wishlist
Cite this document
Summary
The technological revolution in this era has brought about globalization, especially through the introduction of radical new technologies in the field of Information Technology. …
Download full paperFile format: .doc, available for editing
HIDE THIS PAPERGRAB THE BEST PAPER93.3% of users find it useful 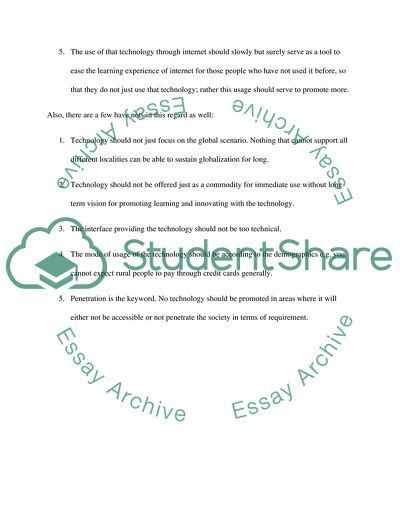 The technological revolution in this era has brought about globalization, especially through the introduction of radical new technologies in the field of Information Technology. Though the former statement is generally agreed upon, people mostly fail to see that this technology has not brought all the people of this world together as a global community; rather it has also served to create a digital divide. This divide is not because of national boundaries; instead this divide is due to a gap of technological outreach among different geographical areas, most importantly rural vs. urban areas (Curtis, 2002; NTIA, 1997). This outreach problem is because of several other reasons as well, such as difference in education level, difference in perceived needs of the societies, the person’s income and their age. According to some, these factors have more of a role in creating the digital divide than the geographical location. (Hindman, 2000; Compaine, 2001). Yet, it is a general consensus that a gap in the use of technology for different people exists.
To solve this problem, there are a few technological haves such as:
1. Technology should be cheaper and it should be easier to use than it is now.
2. The huge benefits of using technology, especially internet, should be clarified.
3. The education required for the use of the technology offered should be minimal.
4. The technologies available through the internet should be pertinent to the demographics, which will automatically develop an interest in its usage, thus decreasing the divide.
5. The use of that technology through internet should slowly but surely serve as a tool to ease the learning experience of internet for those people who have not used it before, so that they do not just use that technology; rather this usage should serve to promote more.
Also, there are a few have nots in this regard as well:
1. Technology should not just focus on the global scenario. Nothing that cannot support all different localities can be able to sustain globalization for long.
2. Technology should not be offered just as a commodity for immediate use without long term vision for promoting learning and innovating with the technology.
3. The interface providing the technology should not be too technical.
4. The mode of usage of the technology should be according to the demographics e.g. you cannot expect rural people to pay through credit cards generally.
5. Penetration is the keyword. No technology should be promoted in areas where it will either not be accessible or not penetrate the society in terms of requirement.
References:
Compaine, Benjamin M. (2001). The Digital Divide: Facing a Crisis or Creating a Myth? MIT Press Sourcebooks. Massachusetts.
Curtin, Jennifer. (2002). A Digital Divide in Rural and Regional Australia? Economics, Commerce and Industrial Relations Group.
Hindman, Douglas Blanks. 2000. The Rural-Urban Digital Divide. Journalism and Mass Communication Quarterly.
NTIA. (1999). Rural Areas Magnify the Digital Divide? Falling through the net: Defining the Digital Divide. National Telecommunications and Information Administration. Read More
Share:
Tags
Cite this document
(“Digital Divide Essay Example | Topics and Well Written Essays - 250 words - 1”, n.d.)
Retrieved from https://studentshare.org/technology/1417189-digital-divide

de
delpha00 added comment 11 months ago
Student rated this paper as
This document saved me today. I liked the structure. It was very useful for my technology course.

CHECK THESE SAMPLES OF Digital Divide

...?Digital Divide in UK Grade 6th December Introduction Digital divide is the inequalities between households, geographical areas, businesses and individuals in different social- economic echelons in access to ICTs (information and communication technology) and IC (internet connectivity) and in the skills and knowledge needed to use the gained information1. The use of ICT is an important element of efficient participation in society. Given the fundamental part that ICT plays in individual welfare, organizational growth, and national development, the government of the UK cannot afford to underestimate the significance of what was referred to as the 'Digital Divide' in 1990s. It is right for countries like UK to consider their efforts... to...
11 Pages(2750 words)Essay

...? Digital Divide and Education Digital divide is the unequal distribution and use of technology among different aspects of the society. This generally is the difference between who have the technology and who do not have it. Access to technology has been on the increase due to cheap availability and ease in use among different technology access methods. Smartphones, personal computers and other portable devices have eased and increased access to technology amongst members in the society. On the other hand, the gap between haves and have-nots has increased due to the impact of this technology to those who have access to it as compared to ones who cannot access nor use the...
5 Pages(1250 words)Essay

...? Bridging the Gap in the Global Digital Divide Daniel L Boehm of Missouri-St. Louis The Global Digital Divide The global digital divide refers to the global disparities between developing and developed countries relating to access to information and computing resources such as the internet and various opportunities that come with such access. This idea is different to the traditional understanding of the digital divide that was based on disparities on the lines of social classes. This paper aims at discussing the global digital divide from the perspective of developing...
11 Pages(2750 words)Research Paper

...Introduction The term 'digital divide' appears as a concern of eminent importance in the context of an information society. The widening gap betweenthe richest and poorest nations across the globe, now also encompasses the access or non-access to knowledge and information in different parts of the world. This paper provides an insightful study of the 'digital divide' that highlights the 'information poverty' existing in the third world countries. The study also identifies various social, economic, and political factors that establish or reinforce the discrepancies concerning availability and usage of information in different nations. It also highlights the major issues...
7 Pages(1750 words)Essay

...The Digital Divide Science and technology has made tremendous progress in the last few decades. The advent of internet has changed the way communication and business is carried out. Transactions are made using net banking, goods and commodities are sold and bought over the internet and with the emergence of 3G, people can even access internet through mobile phones. The world has boiled down to a device that weighs approx 100-200 grams and easily fits into a pocket or a handbag. This has become the age of information sharing: emotions can be shared, business can be shared and entertainment can be shared at the click of a button. Multimedia equipped mobile phones have made life so much easier, faster and...
4 Pages(1000 words)Term Paper

Digital Divide and its Consequences

...The Gender Digital Divide The "gender digital divide" de s a current disparity between the digital technological competency and usage amongst the sexes. "Girls have reservations about the computer culture," while boys seem at home in the digital realm. (AAUW pg. ix). 2) The "gender digital divide" can be compared to the "digital divide" between the races as discussed in Chapter 5: Interrogating the Digital Divide. While males tend to use digital technology more readily than females, there is evidence to suggest that...
2 Pages(500 words)Essay

...﻿Addressing the Digital Divide Abstract The digital divide has many definitions. However, all of them focus on issues related to lack of access to digital technology. The use of this technology got in to the public domain in the late 1990s. So far it has not reached majority of the world’s population. It has led to enlargement of the exclusion of some communities attributed to the capability of accessing digital technology by some while others can not. There are several perceived impacts of the digital divide on the different user groups. Stakeholders are trying to address the digital divide in order to reduce these impacts. However, they are normally faced with conflicts in their endeavors. They offer support alongside policy... ...
12 Pages(3000 words)Research Paper

20 Pages(5000 words)Dissertation
sponsored ads
Save Your Time for More Important Things
Let us write or edit the essay on your topic "Digital Divide" with a personal 20% discount.
GRAB THE BEST PAPER

Let us find you another Essay on topic Digital Divide for FREE!