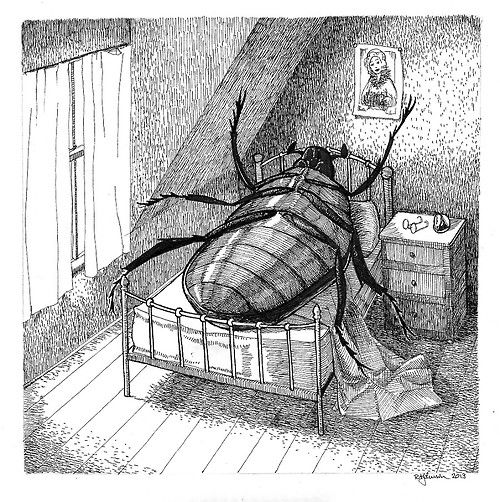 The Metamorphosis by Franz Kafka

The Metamorphosis (German: Die Verwandlung) is a novel by Franz Kafka written in 1912. It was planned to be published with two other novels in a storybook Punishments. Still, because of the fail of the negotiations with the publisher, the storybook did not come out before the author died.

The Metamorphosis was published separately, in 1915. This novel is one of the most famous among Kafka’s works. It has also been adapted to movies for a couple of times.

The main character of the story is Gregor Samsa. He works as a traveling salesman and he’s the one to sustain his family.

The story starts with the mystical transformation of a hero into a giant insect. Kafka has a specific manner of storytelling where he never discloses the reasons of strange and unbelievable happenings or evens. This story is no different. The reader never finds out the reason for the hero’s metamorphosis and is left with the sole fact that it happened.

Gregor stays conscious and realizes everything that happens. He wakes up on his back; he faces a big difficulty to stand up, thus unable to open the door, when the members of his family knock. His mother, father, and sister are worried because if Gregor misses work, he might lose his workplace. This, in turn, would cause a big problem, as the family won’t have any income. So, they knock on the door to wake him up.

Finally, Gregor manages to stand up and come to the door. By that time there comes one of his coworkers to find out the reason for his absence. Once they find out about the metamorphosis, they are terrified. Father forces Gregor to go back to his room and closes the door. In the next couple of weeks, his sister is the only one to visit him in his room. She brings him food and cleans up. But over time she gets tired of this responsibility, and Gregor‘s room becomes uninhabitable.

One day his sister comes up with the idea to remove some furniture from Gregor’s room to give him more space to move. She and her mother start removing the furniture, but once they want to take away the picture from the wall, they see Gregor crawling on the wall and covering it with his body, so they can’t take it away. His mother, when sees him on the wallpaper, shrieks, and faints.

His father comes back from work, sees his wife senseless and Gregor out of the room. He takes some apples from the table and bombards Gregor. One apple lodged in his back. Out of pain, he faints too.

After this Gregor refuses to eat and grows weaker. The apple in his back is causing inflammation as nobody took it out.

Gregor feels guilty, for he is the reason his family members had to look for workplaces. Also, they were forced to let three strangers rent a room in their house.

Gregor suffers from physical and psychological pain and finally decides that his death is the best solution for him and his family. He dies before the dawn.

The story ends with the episode of a happy family having a walk. They have forgotten Gregor completely.

The author does not express his attitude towards the story. He only describes the events. It is a kind of an empty sign that has no meaning. As readers, we can state that the story reveals the tragedy of a lonely, abandoned person, who’s feeling of guilt. The hero faces the absurd of life and senseless fate.

This is a drama of a person who is confronted with irreconcilable, incomprehensible and grandiose fate in its various manifestations. Kafka completes the fantastic picture with many small realistic details that turn it into a grotesque.

Another way to comprehend this piece is to see the uncovering of a relationship between the working class and the burgherdom. The example of Gregor, who works to sustain his family, directly corresponds to the situation in the society, when there is a working class, that sustains the middle class. And once the working proletariat cannot cope with the pressure and fails to sustain the middle class, the burgherdom becomes a working class, and their place is taken by other people. The new coming bourgeoisie in the novel is represented with three men who rent a room from the family. They are being rude to the landlords, they mock Gregor’s sister, and won’t believe she’s good in playing the violin. Once she plays, they talk and won’t listen, and then start checking her play with the sheet music to find any mistakes. Once they find out there were no mistakes, they keep silence.

This novel also shows us the perversion of the values. We see how society deforms us and creates the reality of life where we lead a fragile existence. We attain the jobs we don’t want and we do it for payment. But we hate those jobs so much that one day we wake up and find out that we have been changed into something we never wanted to be. We have a life we never wanted, and we are something we never wanted to be. Family and friends try to love us and accept the way we are, but eventually, they too leave us alone. This is the brilliant example that we have to keep away from anything that society expects from us if it doesn’t fit into our reality. Nobody would stand by your side when you break down and refuse to do what is expected from you. Especially if your whole life was built upon it.

In Kafka’s world, we see the reflection of our reality. Love becomes nothing, economics rules. Social laws, ethics, family, and friends, - none from above matters when there is an income question.