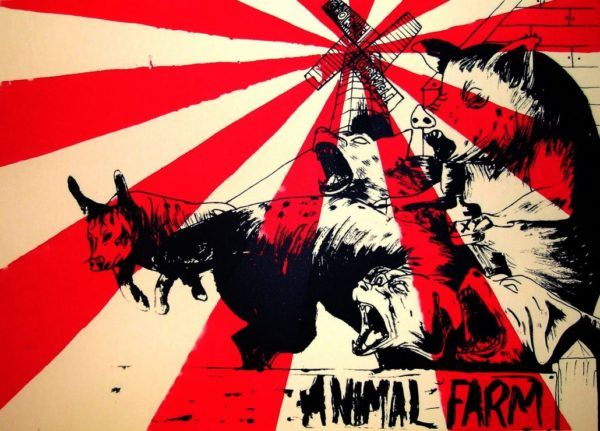 Animal Farm is a fairy story written by George Orwell in 1945. This novel is also sometimes called a dystopia and a satirical narrative. The story shows the evolution of animals, who drove the previous owner, the brutal Mr. Jones, from the corral. Thus they go through the steep path, from great freedom to the dictatorship of a pig called Napoleon.

In this narrative, Orwell tried to show the degeneration of revolutionary principles and programs, namely, the transition from the idea of universal equality and construction of a utopia to a dictatorship and totalitarian regime. Animal Farm is a parable, an allegory for the 1917 revolution and the following events in USSR.

On the Manor Farm, located next to the town of Willingdon in England, begins an uprising. At the very beginning of the novel, the farm is owned by the local alcoholic farmer Mr. Jones. The business of the farm is running poorly, all the animals starve from time to time, and the farmer allows himself to butch pigs and drown dogs, once they get too old to serve. One day an Old Major, a boar from the farm encourages all the animals to start an uprising against humans. After three days he suddenly dies, but the rebellion happens under the leadership of three young pigs, Snowball, Squealer, and Napoleon. They wait until Mr. Jones gets waisted one night and animals drive him and his company away from the farm. The farm gets renamed to the Animal Farm and from now on is ruled by three pigs. They set 7 main rules of the farm, called the Seven Commandments of Animalism. They are pretty short and reflect the testament of the Old Major, saying

Those rules are written on the large barn. Still, they appear to be too complicated for most animals to understand. Thus they get shortened to become clear. They became more like “Four legs are good, two legs are bad,” and so on. After some time pigs would stop following those commandments themselves but would advocate them in front of other animals. They secretly transform those rules, so now they reflect the lifestyle they want without ‘breaking the law.’ The main one sounds like “All animals are equal, but some are more equal than others.’ This phrase, by the way, became viral after the release of the novel.

At the renovated “Animal Farm” animals consider themselves to be free and happy, even though they have to work from dusk till dawn. Snowball makes a flag of the farm from the green tablecloth. They start leading the casual gatherings for planning the work. While one of those gatherings Napoleon captures the full authority over the farm, relying on the support of ten huge dogs, whom he hid and raised. The other revolution leader, Snowball, ran away and nobody saw him ever again.

Animals set themselves an ambitious goal, to build a windmill. They start working even harder than it was before. Just before they almost finish it, the mill is destroyed by a storm. Napoleon calls this crash sabotage organized by Snowball and convinces other animals it is true. Under Napoleon’s commandment, dogs kill several animals, who are accused of being Snowball’s agents. Also, Napoleon corrects, and then wholly canceled all the rules of Animal Farm, except for one. The essential rule “All animals are equal” transformed into “All animals are equal, but some are more equal than others.”

Life on a farm runs under the total control of Napoleon and his closest servants-pigs. They make all the decisions on the farm. Once, the owner or the other nearest farm, Mr. Frederick, tries to seize the Animal Farm but fails. In several years there are practically no animals left, who would remember the times before Revolution.  Pigs migrate to Jones' house, put on his clothes, drink his wine, play cards with people, the neighbors from other farms. The story ends with a quarrel and the reconciliation of people and pigs. The story ends up with the following sentence. “As the animals outside gaze at the scene and look from pig to man, and from man to pig, and from pig to man again, they can no longer distinguish between the two.”

Old Major, an old boar, ideological inspirer of the revolution. He dies shortly before the uprising. After the revolution, animals dig his skull out, put it on the stick and as an every morning ritual, sing the anthem to it. THere are two prototypes for this character, Karl Marx, the founder of Marxism, and Vladimir Lenin, Russian statesman and politician.

Napoleon, an aggressive wild boar, who grabs all the authority on the Animal Farm after the rebellion. He uses ten dogs and all kinds of repressions to strengthen his position and suppress dissent. He also expels his chief rival, Snowball, away from the farm. After this Napoleon develops the cult of personality and the authority he has over animals on the farm. The image of Napoleon refers to Stalin, Russian political leader.

Snowball, one of the rebellion leaders. He sincerely believes in the animals' equality and society build under the Seven Commandments of Animalist. He owns excellent rhetorical skills and basic military knowledge. Therefore he is of immense respect on the farm. At the weekly gatherings, he always argues with Napoleon on economic issues. Thus, Napoleon banishes Snowball from the farm for good. The initial plan of Snowball to build a windmill, ridiculed by Napoleon first, now is turned into action. Napoleon claims to own this idea. The image of Snowball refers to Leon Trotsky, the Russian revolutionary, and Marxist theorist.

Squealer, a pig responsible for the official speeches. Squealer was a skilled agitator. Through the novel, he continues to praise Napoleon and his “wisest” actions but often contradicts himself in his statements. One night he was caught by the animals while correcting the seven commandments written on the side of the bar.

Boxer, a hard-working horse. He appears to be the most industrious inhabitant of the Animal Farm, as he was working hard for both Mr. Jones and after the uprising, for Napoleon. The naivety of the Boxer prevents him from realizing the rest of the creatures is exploiting him. Thanks to the Boxer the animals manage to work on the mill construction to the almost final stage. However, the hard work completely undermines his strength. Napoleon promises Boxer to cure him in the hospital, but in fact, he sells the faithful follower to the slaughterhouse and buys whiskey for the money he gets. Boxer seems to be the metaphor for the Stakhanovite movement.

Clover, another horse on the farm, best friend of Boxer. She would be the one who would remember the initial goals of the rebellion best.

Mollie, an idle horse, loves ribbons, which are the symbol of luxury. Shortly after the uprising, Molly, unable to adapt to the new order, escapes the farm and comes to the service of the neighboring farm owner. From that moment she is not allowed to be mentioned on the Animal Farm. The character embodies Russian emigrants after the overthrow of the Tsar of Russia.

Moses, an old crow, the oldest resident of an Animal Farm. He preaches about the Candy Mountain, Heaven, where all animals go after death. Pigs protest against these beliefs, and after the rebellion, Moses leaves the farm but returns in a while. Personalizes religion.

Benjamin, the old donkey. He is skeptical about everything happening, the revolution in particular. Still, he was never inclined to express his opinion directly. Unlike other animals, he could read well, and he had to notice the rewriting of the seven commandments on the side of the barn. Apparently, among all the heroes of the book, he was the one to soberly assesses the situation. He is also the only one who realized that the Boxer was sent to slaughter. Personalizes intellectuals.

Sheep, a part of a population with weak mental abilities, unable to critically examine events on the farm. Easily manipulated by Napoleon and Squealer. They fulfill any order and support any proclaimed ideas.

Dogs, the guards of the revolution. While Snowball was drawing plans for building a mill, Napoleon brought up puppies - guardians of the revolution, obedient to him solely. Thanks to them, Napoleon seized and held power on the farm. Personalize the NKVD (People's Commissariat of Internal Affairs).

Mr. Jones, the owner of the farm. A symbol of the ‘old order.’ At the end of the novel, Mr. Jones dies from alcohol addiction. Prototypes, Nicholas II of Russia and Alexander Kerensky.

Mr. Frederick, a brutal and aggressive owner of the neighboring farm. Vainly tried to capture the Animal Farm. The character is based on the personality of Adolf Hitler.

Mr. Pilkington, an easy-going owner of the large and prospective farm. Still, his land is covered with weeds and seems to be quite unorganized. In the end, he is the one to visit pigs and plays cards with them. His character is similar to Winston Churchill.