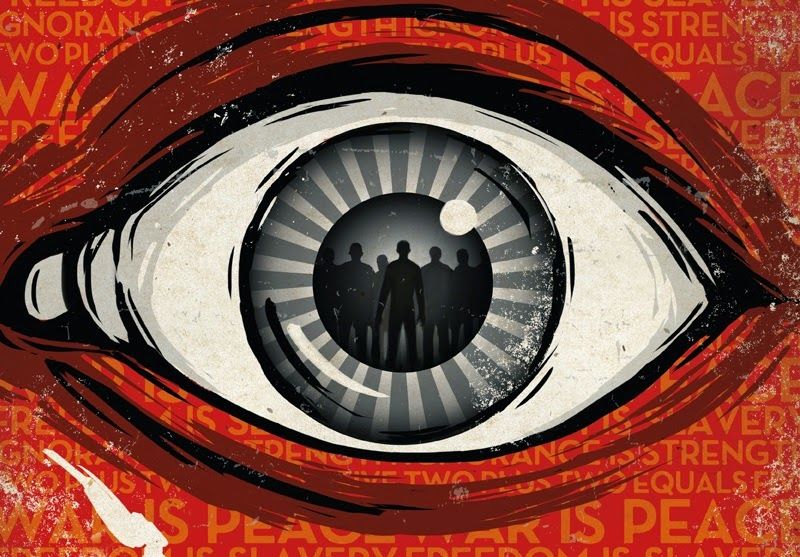 1984 or Nineteen Eighty-Four is a famous dystopia by an English writer George Orwell written in 1948, published in 1949. There is a version that the name of the novel came out from the year it was written, but numbers 4 and 8 were swapped.

A novel tells the life story of Winston Smith and his come-down under the pressure of the totalitarian state. It is one of the most famous and one of the most quoted dystopias of the world. Its popularity is usually compared to Fahrenheit 451 by Ray Bradbury and Brave New World by Aldous Huxley. The novel was translated into 62 languages. It has also had a massive impact on the English language, as the phrases from the book and the author himself turned into idioms in discussions, particularly in matters of privacy and national security. Thus, the famous saying ‘Big brother is watching you!’ means nothing else, but an act of watching that is perceived as violent.

In 2009 famous British newspaper The Times declared the novel ‘1984’ to be the most important written book over the past 60 years.

The novel holds the second place in Newsweek’s Top 100 books.

There were times when the novel was considered to be politically dangerous and too revolutionary; thus it was forbidden in some U.S. libraries. No need to mention that totalitarian states had it in the list of banned literature as well.

The main character, Winston Smith, lives in London, works for the Ministry of Truth and is a member of the Outer Party. Still, he doesn’t share the ideology and slogans of the Party and deep down in his heart strongly doubts the party, the reality he lives in and actually everything that can be doubted. He eventually gets himself a journal to write down all his hesitations, blow off steam and keep himself away from rush decisions. When in public, he tries to look like a real supporter of party ideas. Still, he is afraid that a girl Julia, his co-worker in the Ministry, follows him and wants to reveal his secret. At the same time, he believes that his superior, O'Brien, a member of Internal Party, also does not share the views of the party and is an agent for a secret underground resistance movement known as the Brotherhood, a group formed by Big Brother's reviled political rival Emmanuel Goldstein.

One day Winston runs into the ‘proles’ (or proletariat) neighbourhood, where a Party member is not allowed to be. There he finds Mr Charrington’s junk shop. The owner shows him a small room, where Winston dreams to spend at least one week. On his way back home he meets his coworker Julia. Smith realizes she’s been following him and plunges into a nightmare. He hesitates between the desire to kill her and a huge fear of doing so. The fear wins, and he won’t dare to run after her and kill her. Soon the situation becomes clear, as Julia passes him a note, where she makes a love confession to him. They start having a secret affair and date a couple of times a month. Still, Winston is obsessed with an idea they’re living dead, for law forbids free romantic relationships between man/woman members of a Party. So, they rent a room from Charrington to secretly meet each other from time to time. Winston and Julia also decide on a crazy thing. They go to the O'Brien and ask to initiate them into the underground Brotherhood. Still, they are not quite sure he is a member of it, they only suppose he might be. O'Brien welcomes them and gives them a book, called ‘The Theory and Practice of Oligarchical Collectivism,’ written by a state enemy, Emmanuel Goldstein.

Over time, they get arrested in Mr Charrington’s room, as this pleasant old man appears to be a Thought Police coworker. Winston gets tortured and interrogated in the Ministry of Love. Surprisingly, his chief executioner turns out to be O’Brien himself. At first, Winston desperately tries to fight and stay true to own ideas and principles. After longlasting tortures, both mental and physical, he gradually denies everything he believed, but he’s still hoping to resign them by a mind, not by the soul. He gives up on everything, but his love for Julia. Unfortunately, this love gets carelessly broken by O’Brien too. Eventually, Winston gives up on his love for Julia and cheats on her, but he still believes those were words only, which came out from fear and anxiety.

He is considered to be ‘healed’ from his revolutionary ideas and gets out from jail. Just after his release, Winston understands he betrayed his love at the very moment when he gave up on Julia at the Ministry of Love. He gave up on her completely. Radio broadcasts the Oceania victory over Eurasia, and right after Winston understands he is cured. Now he truly loves the Party; he loves the Big Brother.

Winston Smith, the main character, 39 years old, male. Born in London, in 1944 or 1945. He works in the Records Department at the Ministry of Truth for his whole life. His work is to improve the documents by removing anything that contradicts the Party’s ideas and propaganda. He pretends to be the Party’s ideas follower, but deep down in his heart, he hates them. Throughout the novel, he is dressed up in the uniform of the Outer party coworker. This protagonist got his name after Winston Churchill, a leader of the British Conservative Party, which was hostile to Orwell's political views.

Julia, a girl in love with the main character. She is 26 years old, has brown hair and eyes. She is a member of the fanatical Junior Anti-Sex League. Works at the Ministry of Truth in the Department of Literature. She pretends to be the Party’s follower but secretly breaks the law all the time.

O’Brien, an antagonist, a high-ranking member of the Inner Party. He is described as “a tall, dense man with a thick neck and a rough, mocking face.” O'Brien is not devoid of charm, he’s clever, and the appearance of the heavyweight boxer in conjunction with the good manners results in a strange contrast. He “initiated” Winston and Julia into the Brotherhood. He told them that Brotherhood is an underground anti-government structure in which, due to conspiracy and decentralization, each participant knows only three or four others, and the exact number is unknown to anyone. Later O’Brien promotes the arrest of Winston and Julia and “re-educates” Winston in the Ministry of Love.

Syme, a well-educated Winston’s coworker. One of the dearest people to the main character. He is a philologist and works on the 11th edition of the Newspeak language. Dreams of creating a language, that would exclude any possibility of Doublethink.

Parsons, Winston’s neighbour, and coworker. He was described as a fat, but active man, approximately 35 years old. Winston and Syme are not really into talking to him. He is a perfect Party’s member, energetic, good at work, not really into thinking and blindly following everything that is dictated by the Party.

Ampleforth, Winston’s coworker, works at the Ministry of Truth. His specialization is poetry, particularly in the so-called ‘canonical texts,’ which are translations from English into Newspeak. Later he’s put into jail because in one of the translations he used the word ‘pray.’

Martin, O'Brien's servant. He’s described as a short, frail man with a mongoloid's face, in a white servants costume.

Characters mentioned in the novel, but not participating in its events

Big Brother, the sole leader of the party. He is portrayed as a middle-aged black-eyed man. The approval of the Single Power of the Big Brother started in 1960, from that time began the extermination of party leaders directly involved in the revolution; This process was completed in the early 1970s. It might be that Joseph Stalin served as the prototype of the Big Brother.

Emmanuel Goldstein, state’s first and foremost enemy. He was among people leading the revolution, but later, according to the official version of the Party, he betrayed the state and fled abroad. In Oceania, he is believed to be a creator of the underground Brotherhood, with the secret goal to fight the Party. He is considered to be the author of the book The Theory and Practice of Oligarchical Collectivism.

Katharine, formally Winston’s wife, but in reality, they are divorced, and she appears only in Winston’s memories. She was deeply devoted to the Party ideas, experienced a great aversion to sex, but every week demanded Winston to “fulfil the Party duty” to conceive a child. After a series of vain attempts to get pregnant, she leaves Winston.

Jones, Aaronson and Rutherford, former high-ranking members of the Internal party. They were the first leaders of the revolution but later were charged with betraying the revolution and arrested.