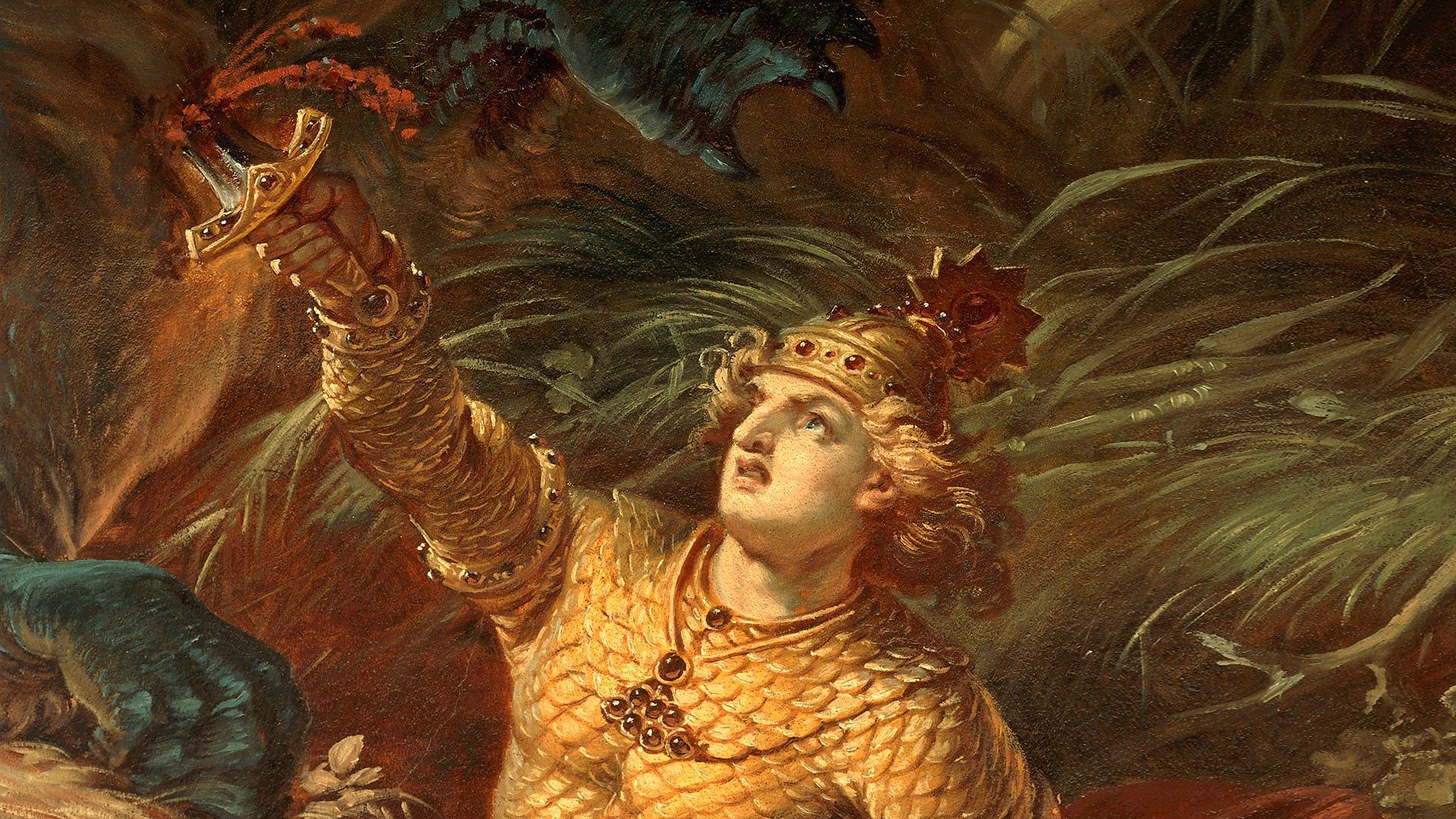 Beowulf is an Old English epic story. It consists of 3,182 lines, which makes it quick to read. It is considered to be the oldest surviving long story in Old English. Also, it is commonly cited, which makes it one of the essential works of English literature.

It is hard to determine the date of composition. Loads of scholars tend to state it was produced somewhere between 975 and 1025. The name of the author is also unknown, so usually, it is referred to as the "Beowulf author."

The story happens in Scandinavia. Beowulf is a hero of the Geats, people of South Sweden. His name is a metaphor to a bear, as the hero usually kills his enemies with bare hands.

The poem is divided into two parts. First one tells us of the young Beowulf, who defeats Grendel. Grendel appears to be the offspring of Cain. As the story says, Grendel was a monster living in Danes and terrifying the local people. So, Beowulf comes to the aid of Hrothgar, the king of Danes, and defeats the beast.

Once it is done, appears the mother of Grendel and attacks the hall. Beowulf is fighting with her and eventually conquers her too. After the battle is over, Beowulf returns home with triumph.

In the second part, Beowulf, already a king, but aged and old, is fighting a dragon, which is threatening his country. He wins a battle, but he is seriously wounded and dies after a short period. Still, the death is not considered as a sad happening. People celebrate him as a hero, cremate his body and build a tower on a headland in his memory.

The story is full of the fairy tales elements but claims to have a decent historical background. Some characters, like Beowulf himself and Hrothgar were mentioned in other manuscripts. Also, the lands, the names of peoples, etc. were taken from real historical names and places.

The events take place in Scandinavia (Denmark and the south of modern Sweden). Danish King, Hrothgar, has built a Heorot Hall for his soldiers, where they keep celebrating their victories. Once they stay there to sleep, and that night comes the monster, Grendel. It attacks the warriors and kills 30 men. Those attacks keep happening for 12 winters (time measure, which means 12 years). Loads of best men die in battles with the beast.

Beowulf goes to Denmark. He remembers the great kindness of the king Hrothgar in the past. There was a story when Beowulf’s father was a refugee, Hrothgar gave him a place to stay. So he decided to pay back with kindness too. He took his best warriors and sailed to Denmark.

Once Beowulf’s people fall asleep in Herot, the beast comes. One of Beowulf’s men, Hondshew, gets killed in the attack. Also, Grendel bewitches the weapons, so they become useless. Beowulf fights the beast alone and barehanded. Eventually, he tears off Grendel’s arm, which becomes a mortal wound for the creature. He dies soon.

Hrothgar is happy. He orders to clean the Herot Hall and prepare it for the celebration. He presents Beowulf a golden banner, a helmet, a coat of mail, an ancient sword, and eight horses. The trophy of a battle, an arm of Grendel, is placed on the wall of the Hall.

Once everybody falls asleep after the celebration, comes Grendel’s mother. She is vicious because of the death of her son, so she decides to take revenge. She kills one of Beowulf’s men, Esher, and leaves his head on the seaside. Beowulf fights with her and conquers her too. He hits her with a giant sword in the neck, and she dies. After the battle, Beowulf brings her head to Hrothgar. He gets rewarded for this heroic battle too.

After those two battles, Beowulf turns into a hero of the land and becomes a king of Geatland for the next fifty years. When he gets old, appears the third monster. The giant dragon is threatening the land because some shepherd stole a bit from its treasure. The dragon is furious of awakening and robbed, so it uses the fire and smoke to burn the lands and houses.

The battle is described in all the details. Beowulf wants to fight the dragon by himself, as he doesn’t want to risk the life of his men. But loads of them join him in the dragon's tower anyway. Still, eventually, Beowulf meets dragon face-to-face. He ordered to make an iron helmet for him, as the previous one was wooden and had nothing against fire. In the battle, he appears barehand again and is intended to take the life of the dragon. As the story goes, it is not really apparent, who is about to win, as the dragon is mighty and extremely dangerous. In the end, we see, that Beowulf wins, the dragon dies. But Beowulf himself was seriously burned with fire and wounded in the neck.

He dies soon. His people build a funeral pyre for him; soldiers march past his body and the body of the killed dragon. Afterward, they toss the dragon’s body into the sea and burn the body of Beowulf, as his testament said. They also put his helmet, battle shields and mail shirts on to the funeral fire. The ashes left are put into the tower on the seaside. People start composing and singing the songs of great victories and the life of a hero.

The death of hero here is not a sad story to tell. It is presented as a logical ending of a heroic life of a warrior, who dies on a battlefield.

Beowulf is interesting not only because of the fascinating story. There are loads of details to discover and research. We have gathered several outstanding examples of student’s works on Beowulf for you.

First of all, Beowulf is himself an excellent character to depict. He is one of many ancient heroes. He was, like loads of others, strong, valiant and was fighting loads of evil creatures. Why is he outstanding? What is special about him? You can find it out in the research below

The epic story of Beowulf is not only about the victories of good above evil. Should you investigate it a bit further, you’d discover a huge reservoir of symbols and a vast cultural background, which were perfectly depicted by an anonymous author. It is important to bear in mind that basically, it is a story of mythic proportions told through the use of literary tools, like the creation of legends, etc.

The depth of symbolism of Beowulf story might turn out to be the most fascinating research topic ever. It is an essential part to discover and understand, as symbolism differs this epic story from being a simple fairy tale or fantasy.

The adventures of Beofulf uncover an essential part of the society he lived in. Feudal relationships appear to be the dynamism that motivates hero to fight. This motivation also appears to be stronger, than the will to protect the weak or to pursue good. An amazing study of the topic is in the essay below. You are welcome to elaborate on the idea.

The epic poem Beowulf is called a greatest Anglo-Saxon poem due to its age and huge popularity. Practically, this poem is a translation of the legend stranged in Denmark and Southwestern Sweden of the 6th century. What are the place and the role of the poem in worlds literature? What is its impact on contemporary writings and literature studies? A great theme to uncover.