Comments (0)
Add to wishlistDelete from wishlist
Cite this document
Summary
Two sets of variables have been chosen and correlation statistic performed to find out if there is any relationships between them and the extent of that relationship (Asadoorian &…
Download full paperFile format: .doc, available for editing
HIDE THIS PAPERGRAB THE BEST PAPER97.3% of users find it useful 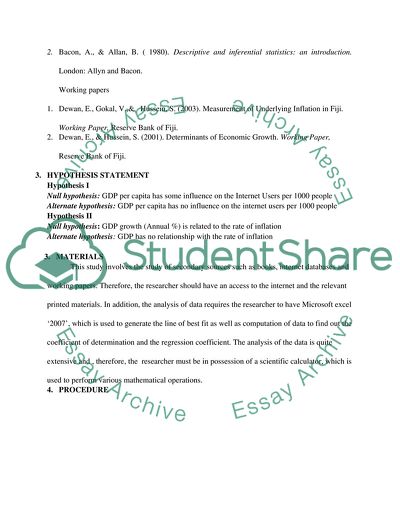 Download file to see previous pages My strong interest to find out how different macroeconomic indicators relate to each other has motivated me to choose this project. Furthermore, I found this project relevant to inferential statistics because the movement of a particular economic indicator can be used to infer movement in another indicator because they are entwined by different factors.
This research has involved reference to different sources including books, the internet and working papers. Mostly, the research has relied on the Time Magazine archive on the economy and the World Bank Database to obtain the respective data for different countries. The citation of these sources are as follows:
This study involves the study of secondary sources such as books, internet databases and working papers. Therefore, the researcher should have an access to the internet and the relevant printed materials. In addition, the analysis of data requires the researcher to have Microsoft excel ‘2007’, which is used to generate the line of best fit as well as computation of data to find out the coefficient of determination and the regression coefficient. The analysis of the data is quite extensive and , therefore, the researcher must be in possession of a scientific calculator, which is used to perform various mathematical operations.
GDP growth per year is the rate at which GDP increase increases annually. It is a measure of the rate at which a country’s wealth is increasing. This variable has been used in this study as an independent variable to find out whether it has any relationship with the rate of inflation in the respective countries.
Inflation, which is measured by the consumer price index, shows the extent to which cost changes annually in respect of acquisition of a basket of products by an average consumer. Ordinarily, this indicator is calculated by Laspeyres formula. In this study, this variable is used as a dependent variable. It will be tested whether it has some relationship ...Download file to see next pagesRead More
Share:
Cite this document
(Time Magazine Archive on Economy Essay Example | Topics and Well Written Essays - 2500 words, n.d.)
Time Magazine Archive on Economy Essay Example | Topics and Well Written Essays - 2500 words. Retrieved from https://studentshare.org/statistics/1787765-time-magazine-archive-on-economy

“Time Magazine Archive on Economy Essay Example | Topics and Well Written Essays - 2500 Words”. https://studentshare.org/statistics/1787765-time-magazine-archive-on-economy.
Comments (0)
Click to create a comment or rate a document
sponsored ads
Save Your Time for More Important Things
Let us write or edit the essay on your topic "Time Magazine Archive on Economy" with a personal 20% discount.
GRAB THE BEST PAPER

Let us find you another Essay on topic Time Magazine Archive on Economy for FREE!