Comments (0)
Add to wishlist Delete from wishlist
Cite this document
Summary
In the paper “Cognitive Development” the writer focuses on the process of the child’s thinking, recognizes self-initiated involvement in learning activities, and accepts individual differences of the students as implied in Piaget theory in the frame of education systems…
Download full paper File format: .doc, available for editing
HIDE THIS PAPERGRAB THE BEST PAPER97.1% of users find it useful 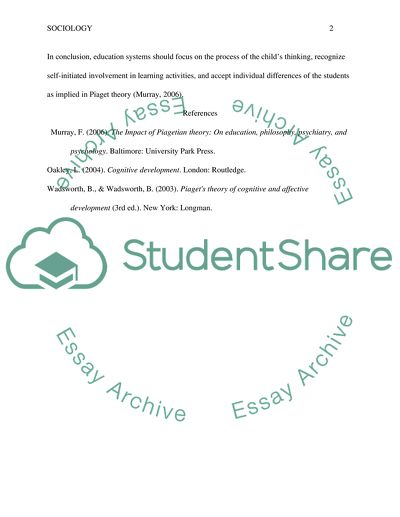 Cognitive Development al Affiliation) Cognitive development the psychological study of how a person thinks, solves problems, makes decisions, and understands his or her own world from childhood to adulthood (Oakley, 2004). Jean Piaget the first psychologist to develop this study explained it in four stages:
Sensorimotor Stage: the child gains knowledge through sensory experiences and manipulation of objects since the motor abilities and reflexes have developed and acquires object permanence. In older infants for instance, when a toy is covered, he will continue to look for it because he knows it continues to exist (Wadsworth & Wadsworth, 2003).
Preoperational Stage: the child is still not able to think logically and uses symbols as his imagination develops and language matures. Their thinking is egocentric as they view everything from their own point of view. For example, they will punish a piece of furniture when they run into it because it has hurt them.
Concrete Operational Stage: At this stage, kids begin to think more logically and the thinking becomes less egocentric. In addition, they become more aware of their surroundings and can mentally reverse their thoughts. He is able to do simple mathematics like to add and subtract.
Formal Operational Stage: this final stage is characterized by the ability to think abstractly, formulate hypothesis and ability to reason contrary to fact. If water is poured in a tall skinny glass and in a short, wide glass, the child understands the volume of water did not change.
In conclusion, education systems should focus on the process of the child’s thinking, recognize self-initiated involvement in learning activities, and accept individual differences of the students as implied in Piaget theory (Murray, 2006).
References
Murray, F. (2006). The Impact of Piagetian theory: On education, philosophy, psychiatry, and
psychology. Baltimore: University Park Press.
Oakley, L. (2004). Cognitive development. London: Routledge.
Wadsworth, B., & Wadsworth, B. (2003). Piagets theory of cognitive and affective
development (3rd ed.). New York: Longman. Read More
Share:
Tags
Cite this document
(“Cognitive Development Essay Example | Topics and Well Written Essays - 250 words - 1”, n.d.)
Cognitive Development Essay Example | Topics and Well Written Essays - 250 words - 1. Retrieved from https://studentshare.org/sociology/1683825-cognitive-development

CHECK THESE SAMPLES OF Cognitive Development

...that they are wrong rather their understanding is structured differently from that of an adult’s. Using Piaget’s theory of cognitive development, we can see where the children base their understanding and beliefs from. Children have their own schema, or cognitive representation of things. This is based on how they get something out of the action or behavior. We can see this in their insistence that two small brownies are more than a bigger brownie, regardless of the size or weight of it. They see it numerically, since two are more than one, then the classmate with two small brownies have more than the rest of the class who had just one big brownie. When Mrs. Arling cut all of the...
5 Pages (1250 words) Essay

... phenomena, which, in everyday life, abounds. Dialectical thinking involves a process of logical thought through which adults can take what, on the surface, may seem contradictory positions. Contextual approach shows how cultural, social, political and economic forces play a role in shaping adult thinking development (Dunkel & Sefcek, n.d). This approach argues that the contextual factors may constitute what affects cognitive development of an adult. I carried an interview on a respondent who showed various issues. I asked questions such as what is your name? How old are you? Have you a spouse? Do you have a house? Do you have problems paying fees? Do you drink? Do you have children? The respondent was 30 years and was married. He lived...
4 Pages (1000 words) Essay

...of development that a person progresses through as they learn and grow. These four stages are sensory motor, preoperational, concrete operational, and formal operational. Through research and testing, Piaget placed an age group on each of the stages. Three to five year olds fall within the preoperational stage of development. Placing emphasis on academic work rather than social skill and self-esteem will help children progress through each stage of cognitive development. There are a few aspects of the preoperational period conducive to academic work. These aspects are symbolic function, deferred imitation, and qualitative identity. "Symbolic function is the...
2 Pages (500 words) Essay

....) Cognitive development theory focuses on the following concerns: the specificity or generalizability of domains in cognitive ability changes; the occurrence and rate of change or the existence of qualitative different stages; the processes occurring in physical or psychological aspect of an individual; and the factors affecting development. Cognitive development theory makes sense of one's environment and physiological conditions at which an individual interacts and functions to provide a system by which the process of learning and teaching might understood and controlled for maximum and optimum cognitive development. On the nature and development of intelligence, cognitive theorists particularly Jean Piaget and Lev S. Vygotsky both...
3 Pages (750 words) Essay

...Jerome Bruner (born 1915) is thought of as one of the most outstanding psychologists of the twentieth century. Bruners involvement in the field of cognitive psychology made him interested in childrens cognitive development and in particular he attempted to investigate processes that underlie the learning by children of language. Bruner summarised his ideas on this topic in one of his well-known works "Child Talk: Learning to Use Language" published in 1983. Let us try to explain Jerome Bruner's account of how infants learn to speak, and discuss his account with reference to developmental psychological research into language development in infancy. For this latter purpose we can compare the views of Bruner with those of Ludwig Wittgenstein...
4 Pages (1000 words) Essay

... and so on. The very basis of forming friends is that their thought processes match and they can get along well. Many scientists today have proven the fact that cognitive development starts at the very beginning, that is, the womb. Fetuses are able to understand sounds. A newly born baby can recognize its parents and know when it is safe and when it is with a stranger. Their brain can recognize when the body is hungry or the baby needs a diaper change, leading the baby to communicate via crying. (online, 2004) Many theorists have developed theories that describe the stages of cognitive development and the way human’s link and process information. Such as Piaget, Vygotsky, Gesell and Spock. Piaget vs. Vygotsky Lev Vygotsky, a Soviet...
4 Pages (1000 words) Essay

...in stages, Vygotsky refers to cognitive development a process by which a child is driven to maturity by the help of adults. From the two theories, adults have a significant role. However, the zone of proximal development gives the adults many responsibilities as compared to Piaget’s theory. According to Vygotsky, adults need to strengthen the cognitive strength of children by exposing them to the real world in significant bits. In the theory, adults also have the responsibility of detecting whether or not a child’s psychology is growing through tests. Vygotsky argues that parents are the determinants of whether or not children will acquire complete...
2 Pages (500 words) Essay

... positive learning environments for their students if they are more cognizant of how people process, learn, and remember information (Blake & Pope, 2008). Piaget perceives learning process from a constructivism perspective, where people get to know through gradual stages by adapting to the environment, while Vygotsky believes that learning occurs through social interaction. As a teacher prepares to teach, there is need to balance the approaches of Piaget and Vygotsky given that learning is both a constructive process and a product of social interaction. Piaget holds the view that cognitive development happens through a series of schemes, which are basic building blocks of thinking. To Piaget, people make sense of the world and create...
5 Pages (1250 words) Research Paper

When it comes to the cognitive development of children, the name of Piaget is und...

...ferent lifestyles. Typical examples of role play given to children are the roles of the baby or the dog. However, the communicative behaviour of such children is often too timid or over-effusive. The variation in role play depends on the socio-cultural structure (Magnusson, 1996, p. 368), that is, common patterns of social pressures and social expectations apart from individual household environment. Explicit role assignments (for example, “Let’s be ship captains now”) are also significant in the cognitive development of children (Oates and Grayson, 2004, p. 244). Thus, Constructivism teaches learners to generate their own ‘rules’ and ‘mental models’ in order to make sense of their own experiences. References: 1. Arnold, C., 2003....
6 Pages (1500 words) Assignment
sponsored ads
Save Your Time for More Important Things
Let us write or edit the essay on your topic "Cognitive Development" with a personal 20% discount.
GRAB THE BEST PAPER

Let us find you another Essay on topic Cognitive Development for FREE!