Comments (0)
Add to wishlistDelete from wishlist
Cite this document
Summary
This paper "Sociology of Cultural Differences" focuses on the fact that Sharon Kim and Maria Estante, both women of Asian descent contemplate cosmetic surgery since they believe their appearances, particularly their eyes, have an effect on the way people perceive them. …
Download full paperFile format: .doc, available for editing
HIDE THIS PAPERGRAB THE BEST PAPER97.6% of users find it useful 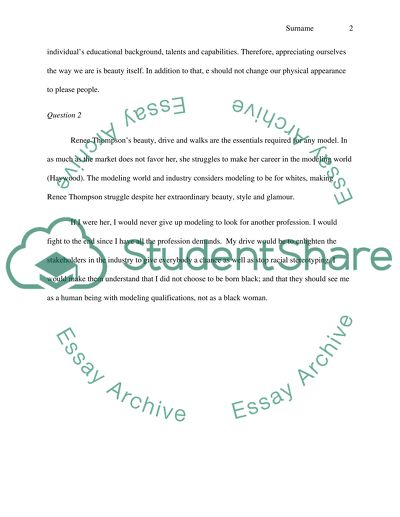 Sharon believes she is not a better person unless she recreates herself by balancing the East and West. The two women believe true beauty and success is only attained by being western (Wong). It shows they lack confidence in themselves; thus, convincing them that they are beautiful and attractive the way they are, is an uphill task.
Personally, I would not change anything about myself even if I had all the resources to do so. In as much as most people spend most of their time admiring their images in mirrors, beauty entails more than the outward appearance. I believe that success is not measured by the physical appearance of individuals. The yardstick for measuring success should be embedded on an individual’s educational background, talents, and capabilities. Therefore, appreciating ourselves the way we are is beauty itself. In addition to that, one should not change our physical appearance to please people.
Question 2
Renee Thompson’s beauty, drive and walks are the essentials required for any model. In as much as the market does not favour her, she struggles to make her career in the modelling world (Haywood). The modelling world and industry consider modelling to be for whites, making Renee Thompson struggle despite her extraordinary beauty, style and glamour.
If I were her, I would never give up modelling to look for another profession. I would fight to the end since I have all the profession demands. My drive would be to enlighten the stakeholders in the industry to give everybody a chance as well as stop racial stereotyping. I would make them understand that I did not choose to be born black; and that they should see me as a human being with modelling qualifications, not as a black woman.
Read More
Share:
Tags
Cite this document
(Sociology of Cultural Differences Assignment Example | Topics and Well Written Essays - 421 words, n.d.)
Sociology of Cultural Differences Assignment Example | Topics and Well Written Essays - 421 words. Retrieved from https://studentshare.org/sociology/1592843-sociology-of-cultural-differences

CHECK THESE SAMPLES OF Sociology of Cultural Differences

Cultural and social globalization denotes the extensive movement of goods, technologies, ideas, images and people around the entire world which has been...
6 Pages(1500 words)Coursework
sponsored ads
Save Your Time for More Important Things
Let us write or edit the assignment on your topic "Sociology of Cultural Differences" with a personal 20% discount.
GRAB THE BEST PAPER

Let us find you another Assignment on topic Sociology of Cultural Differences for FREE!