The Widening Gap between Rich and Poor within Nations - Essay Example

Comments (0)
Add to wishlistDelete from wishlist
Cite this document
Summary
This essay "The Widening Gap between Rich and Poor within Nations" dwells on the consequences of globalization. According to the text, the Franklin University political science students, ask to redress the issue of the widening gap between developed and developing countries because of Globalization…
Download full paperFile format: .doc, available for editing
HIDE THIS PAPERGRAB THE BEST PAPER92.7% of users find it useful 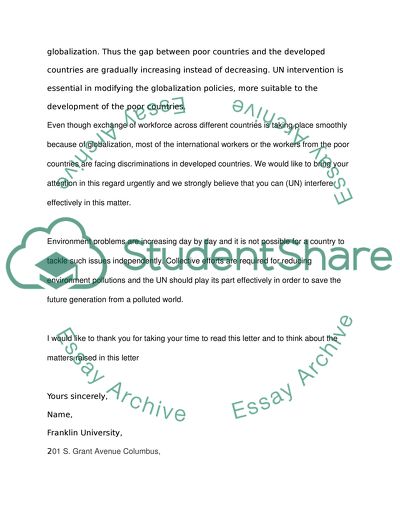 Actually, the developed countries have exploited the resources of the poor countries for self-interests, conveniently forgetting the objectives of globalization. Thus the gap between poor countries and the developed countries are gradually increasing instead of decreasing. UN intervention is essential in modifying the globalization policies, more suitable to the development of the poor countries.
Even though the exchange of workforce across different countries is taking place smoothly because of globalization, most of the international workers or the workers from the poor countries are facing discriminations in developed countries. We would like to bring your attention in this regard urgently and we strongly believe that you can (UN) interfere effectively in this matter.
Environment problems are increasing day by day and it is not possible for a country to tackle such issues independently. Collective efforts are required for reducing environment pollutions and the UN should play its part effectively in order to save the future generation from a polluted world.
I would like to thank you for taking the time to read this letter and to think about the matters raised in this letter
Yours sincerely,
Name,
Franklin University,
201 S. Grant Avenue Columbus,
Ohio 43215 Read More
Share:
Tags
Cite this document
(The Widening Gap between Rich and Poor within Nations Essay, n.d.)
The Widening Gap between Rich and Poor within Nations Essay. Retrieved from https://studentshare.org/sociology/1556669-11-2

“The Widening Gap Between Rich and Poor Within Nations Essay”, n.d. https://studentshare.org/sociology/1556669-11-2.
Comments (0)
Click to create a comment or rate a document

... population and set up a treatment program with aid from the Julius Rosenwald Fund. Though the study initially intended to improve the health of the African American population by providing doses of metals which was used to treat the disease during that period, the coming of the great depression drastically lowered the funds for the project. And it was then that the PHS decided to conduct a study based on the aforementioned hypothesis that racial variation plays a role in the effects of syphilis. The objective of the study was to compare the natural progression of syphilis in untreated poor African Americans who were followed up for a period of 40 years with a healthy control population who were free of the disease. While the initial study...
7 Pages(1750 words)Essay

Auditing would make certain if there are understatements or overstatements in the accounting records of the company. All the reflected information in the overall result from the audited financial statements is being expressed in the audit report. The definition of audit and the role of an auditor perceived by the general public, financial statement users and auditors had contributed to the term called the “expectation gap.” This global fact was brought by a common misunderstanding between the role of the auditor and public perception. Ojo (2006, p.3) defines the expectation gap as, “the difference between what users of financial statements, the general public perceive audit to be and what the audit profession cla...
12 Pages(3000 words)Coursework

The pragmatic parallel mixed methods design was adopted for the study using the questionnaire, structured interview guide and content analysis were the primary instruments utilized in the collection of data. A total of 500 respondents participated in the study. These respondents represented the five sectors considered in the study, namely: the community residents, SEC employees, SEC managers, personnel from other establishments (i.e., the marketplace) and the government.  A combination of sampling techniques was used in this study: stratified random sampling, for the community respondents and SEC employees; simple random sampling, for the respondents of other companies; and purposive sampling for SEC managers and a representa...
88 Pages(22000 words)Case Study
sponsored ads
Save Your Time for More Important Things
Let us write or edit the essay on your topic "The Widening Gap between Rich and Poor within Nations" with a personal 20% discount.
GRAB THE BEST PAPER

Let us find you another Essay on topic The Widening Gap between Rich and Poor within Nations for FREE!