Comments (0)
Add to wishlistDelete from wishlist
Cite this document
Summary
Tourist is somebody who travels for pleasure: somebody who visits places away from home for pleasure (Encarta,2004). Todays tourist was considered as an integral part of post modernity interms of current fashion and lifestyle brought by massive globalisation technology…
Download full paperFile format: .doc, available for editing
HIDE THIS PAPERGRAB THE BEST PAPER93.6% of users find it useful 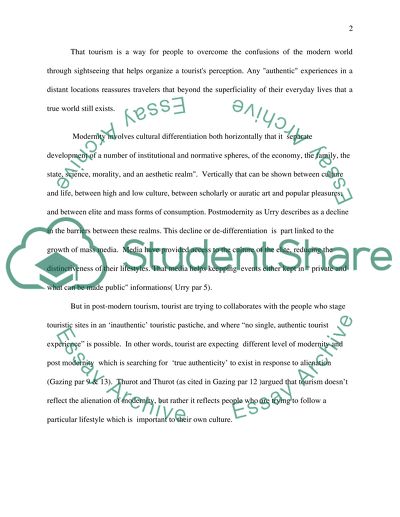 Download file to see previous pages That tourist attractions are precisely analogous to the religious symbolism of primitive peoples culture. Any touristic activities can even understand the taxonomies, values, ideologies, rituals, meaning systems, and differentiations of the modern world. That the international tourism industry does conventionally reproduce and reinforce the modernist ideological separation of the modern from the non-modern world . They have begun to be incorporate it into the ideologies and practices of the capitalist modernity (Tourist Production par 10).
Yochi Li's, 2005 (par 16) reported that tourism has become fetishized as a thing, a product and a behavior particularly economic in nature. That todays tourism was considered as the highest earner industry of the world. Tourism as a heuristic interprets modernity that is searching for an 'authentic' experiences in the world where people in the modern world are alienated. It is a form of liminal, heightened experience of seeking an authenticity outside the structure of mundane, ordinary, alienated work life ( Gazing par 8).
That tourism is a way for people to overcome the confusions of the modern world through sightseeing that helps organize a tourist's perception. Any "authentic" experiences in a distant locations reassures travelers that beyond the superficiality of their everyday lives that a true world still exists.
Modernity involves cultural differentiation both horizontally that it separate development of a number of institutional and normative spheres, of the economy, the family, the state, science, morality, and an aesthetic realm". Vertically that can be shown between culture and life, between high and low culture, between scholarly or auratic art and popular pleasures, and between elite and mass forms of consumption. Postmodernity as Urry describes as a decline in the barriers between these realms. This decline or de-differentiation is part linked to the growth of mass media. Media have provided access to the culture of the elite, reducing the distinctiveness of their lifestyles. That media helps keepping events either kept in " private and what can be made public" informations( Urry par 5).
But in post-modern tourism, tourist are trying to collaborates with the people who stage touristic sites in an 'inauthentic' touristic pastiche, and where "no single, authentic tourist experience" is possible. In other words, tourist are expecting different level of modernity and post modernity which is searching for 'true authenticity' to exist in response to alienation (Gazing par 9 & 13). Thurot and Thurot (as cited in Gazing par 12 )argued that tourism doesn't reflect the alienation of modernity, but rather it reflects people who are trying to follow a particular lifestyle which is important to their own culture.
This time tourism is highly significant to humanistic conditions of modernity and post-modernity which are considered as one best industry of the world in response to present social conditions (Gazing Par 17). That recent people's lifestyle wants to get out from heavy work load, social problems, and various activities and now people wants to relax and have a short leisure time as a way of recharging themselves. These would makes them more efficient, productive, achiever and getting higher work performance in any organization if ...Download file to see next pagesRead More
Share:
Tags
Cite this document
(“Post-Modern Tourism Essay Example | Topics and Well Written Essays - 3000 words”, n.d.)
Post-Modern Tourism Essay Example | Topics and Well Written Essays - 3000 words. Retrieved from https://studentshare.org/sociology/1525681-post-modern-tourism

CHECK THESE SAMPLES OF Post-Modern Tourism

It now directs and supervises banking activities through a complex set of tools and instruments that embody the country’s monetary policies.
Central banking can be traced to the 17th century Swedish Riksbank. The bank was created in 1668 as a joint-stock bank and helped the Swedish government with its monetary needs as well as serve as a clearinghouse for commerce. Just a few decades after, or in 1694, England established its own joint-stock bank called Bank of England. It was established primarily to buy the country’s debts. Other European countries soon followed and established their own national banks not only to serve their debts but also to solve monetary disarray as in the case of France’s Banque de Fr...
7 Pages(1750 words)Case Study

...Discovering the Tragic Hero: Ancient and Modern The concept of the tragic hero was first brought forward in ancient Greek mythology through the writings of the philosopher Aristotle as he described the important individual characteristics the tragic hero must possess. Although Aristotle outlines three requisite character traits that the tragic hero should possess, he qualifies the definition of the tragic hero with a set of events that must also take place before the hero can be considered truly tragic. Once this process is understood, it is easy to see how the sudden downfall of a mighty man, such as Oedipus the King from the play by Sophocles for example, would be dramatic and shocking to a public dominated by strict social classes...
9 Pages(2250 words)Essay
sponsored ads
Save Your Time for More Important Things
Let us write or edit the essay on your topic "Post-Modern Tourism" with a personal 20% discount.
GRAB THE BEST PAPER

Let us find you another Essay on topic Post-Modern Tourism for FREE!