Comments (0)
Add to wishlistDelete from wishlist
Cite this document
Summary
The study conducted on the mental health of children and adolescents in the United Kingdom was undertaken as part of the Office for National Statistics series of surveys on the state of mental health in the general population in the country. The said series of surveys had the primary purpose of providing up-to-date information about the prevalence of psychiatric problems among people in Great Britain, as well as their associated social disabilities and use of services.
…
Download full paperFile format: .doc, available for editing
HIDE THIS PAPERGRAB THE BEST PAPER94.7% of users find it useful 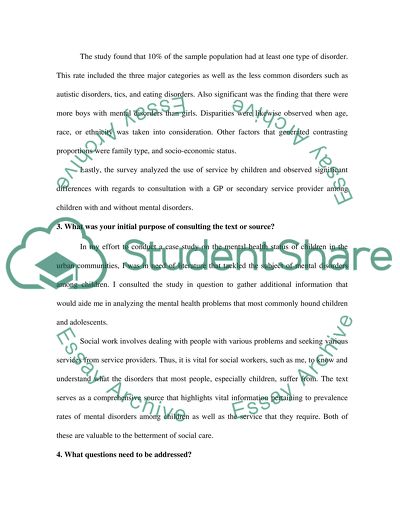 Download file to see previous pages The information generated by the study was to be used for policy making regarding the importance of providing mental health services for both children and adolescents.
The sample used in the survey was taken from the Child Benefit Records being held by the Child Benefit Centre. All respondents were between the ages of 5 and 15. Various demographic characteristics were likewise gathered for the purpose of determining variations based on these factors.
The study found that 10% of the sample population had at least one type of disorder. This rate included the three major categories as well as the less common disorders such as autistic disorders, tics, and eating disorders. Also significant was the finding that there were more boys with mental disorders than girls. Disparities were likewise observed when age, race, or ethnicity was taken into consideration. Other factors that generated contrasting proportions were family type, and socio-economic status.
Lastly, the survey analyzed the use of service by children and observed significant differences with regards to consultation with a GP or secondary service provider among children with and without mental disorders.
3. What was your initial purpose of consulting the text or source
In my effort to conduct a case study on the mental health status of children in the urban communities, I was in need of literature that tackled the subject of mental disorders among children. I consulted the study in question to gather additional information that would aide me in analyzing the mental health problems that most commonly hound children and adolescents.
Social work involves dealing with people with various problems and seeking various services from service providers. Thus, it is vital for social workers, such as me, to know and understand what the disorders that most people, especially children, suffer from. The text serves as a comprehensive source that highlights vital information pertaining to prevalence rates of mental disorders among children as well as the service that they require. Both of these are valuable to the betterment of social care.
4. What questions need to be addressed
Does the study pinpoint the most common disorders among children and adolescents as well as the demographic factors that influence the occurrence of such illnesses
Does the study utilize a sample that is representative of the entire population under study Does it reflect the current state of mental health among children and adolescents in Great Britain
Does the study identify ways by which service for children and adolescents with mental disorders can be improved
5. All the theories have strengths and weaknesses. No theory provides a complete account. How is this identified in your chosen text
The researchers utilized various sources to gather the pertinent data regarding the mental disorders of children.
The researchers are some of the most knowledgeable in the field and have the ...Download file to see next pagesRead More
Share:
Tags
Cite this document
(“Social Work Practice Case Study Example | Topics and Well Written Essays - 1500 words”, n.d.)
Social Work Practice Case Study Example | Topics and Well Written Essays - 1500 words. Retrieved from https://studentshare.org/sociology/1505794-social-work-practice

...SOCIAL WORK PRACTICE Topic: Social Work Practice Question One: Generally, ethical conduct in community intervention touches on the treatment of people, money, information, and the general conduct of community workers, initiative and organization, even when they are not dealing with the community directly. It is however important to understand that ethical behavior generally portend doing work that is right for the community and the participants as well (Dolgoff, et al, 2008). They also touch on basic community organization values. Values in this case refer to ideals that an organization endeavors to achieve (Dolgoff, et al, 2008). Ethical practices on the other hand are values that offer a community organization directives for action...
5 Pages(1250 words)Essay

As pointed out in a study by Osgood and Halsall (2007) where they carried out research to examine the position of women in leadership or management positions, a “glass ceiling” exists for women in the academic setting, which could significantly impair motivation. Since many of the individuals employed in the early education sector are women, addressing this issue is even more important because these individuals are faced with the difficult task of shaping young minds while also dealing with the problems associated with the actual physical care of very young children. The quality of professionals in this sector is vital because it impacts the growth and development of the children that they care for. The degree of invol...
6 Pages(1500 words)Coursework
sponsored ads
Save Your Time for More Important Things
Let us write or edit the case study on your topic "Social Work Practice" with a personal 20% discount.
GRAB THE BEST PAPER

Let us find you another Case Study on topic Social Work Practice for FREE!