Comments (1)
Add to wishlistDelete from wishlist
Cite this document
Summary
Excessive and uncontrolled watching of TV and unregulated media content can be detrimental to our lives. The writer of the paper "Watching Television And People's Quality Of Life" discusses whether watching television is harmful to young children or not…
Download full paperFile format: .doc, available for editing
HIDE THIS PAPERGRAB THE BEST PAPER98.5% of users find it useful 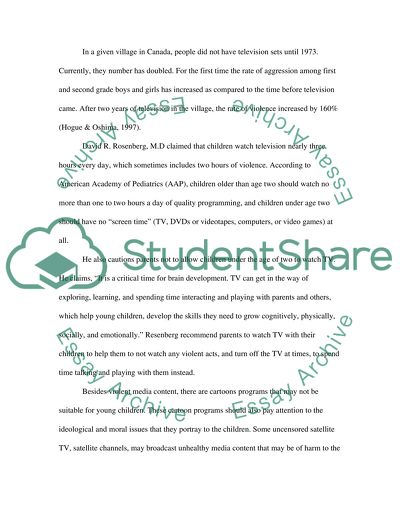 Extract of sample "Watching Television And People's Quality Of Life"

Download file to see previous pages The television-watching behavior of the children should be monitored closely and potential problem dealt with early enough before it goes out of control. Otherwise, the family set up may be carried away by the wave of “cultural invasion.” It can be claimed that television is a double-edged sword. This is because it can expose people to unhealthy media content but it can provide useful material at the same time. Certainly, there are many tv programs that present information that is culturally and ideologically beneficial. Does TV Teach Violence? In 1996, the law was passed in the U.S requiring TV sets in the future to have V-Chips that would allow parents to block out any unhealthy program they do not want their children to watch. Research shows that some of the TV programs teach children violence and affect their physiological cognition mechanisms. In a given village in Canada, people did not have television sets until 1973. Currently, the number has doubled. For the first time, the rate of aggression among first and second grade boys and girls has increased as compared to the time before television came. After two years of television in the village, the rate of violence increased by 160% (Hogue & Oshima, 1997). David R. Rosenberg, M.D claimed that children watch television for nearly three hours every day, which sometimes includes two hours of violence. According to American Academy of Pediatrics (AAP), children older than age two should watch no more than one to two hours a day of quality programming, and children under age two should have no “screen time” (TV, DVDs or videotapes, computers, or video games) at all. He also cautions parents not to allow children under the age of two to watch TV. He claims, “It is a critical time for brain development. ...Download file to see next pagesRead More
Share:
Tags
Cite this document
(“Watching Television And People's Quality Of Life Case Study”, n.d.)
Watching Television And People's Quality Of Life Case Study. Retrieved from https://studentshare.org/sociology/1441060-tv-essay
(Watching Television And People'S Quality Of Life Case Study)
Watching Television And People'S Quality Of Life Case Study. https://studentshare.org/sociology/1441060-tv-essay.
“Watching Television And People'S Quality Of Life Case Study”, n.d. https://studentshare.org/sociology/1441060-tv-essay.
Comments (1)
Click to create a comment or rate a document

he
hermannclare added comment 1 year ago
Student rated this paper as
Terrific work done on the "Watching Television And People's Quality Of Life". I think it is the best sample I have seen so far.

CHECK THESE SAMPLES OF Watching Television And People's Quality Of Life

...Running head: Televisions Televisions s Televisions There are various kinds of media used these days and many of them are used for the rationale of providing information. This makes people aware of new things and gives an understanding of their surroundings. This is what that makes this world a global village. Types of media used are television, radio, newspapers, magazines, journals, books, radio, films/ ad films and internet. All these sources play their own main role in spreading information around the world, with all its integrity and truthfulness. The technologically developed hardware for this purpose is known as “Television”; giving out both, the voice and the vision. i Television is the mostly widely used mean of spreading...
6 Pages(1500 words)Coursework

Community life has its advantages but also has its limitations to the members and the outsiders.
“The good things we secure for ourselves are uncertain and precious until it is secured for everyone and incorporated into our common life.”-Jane Addams. With society moving faster and more detached to technology, busy schedules, and job changes, it becomes harder and harder to feel a sense of community. This can result in a life of solitude and a lose a sense of belonging. Community life helps extract people out of this solitude life and introduce better, challenging and fun tasks such as participation in acts of kindness. It also provides room for volunteering, meeting neighbors, discussing important issues with othe...
7 Pages(1750 words)Case Study
sponsored ads
Save Your Time for More Important Things
Let us write or edit the case study on your topic "Watching Television And People's Quality Of Life" with a personal 20% discount.
GRAB THE BEST PAPER

Let us find you another Case Study on topic Watching Television And People's Quality Of Life for FREE!